Photo Credit: "A lobster dish, with a stuffed lobster and lamb chops. Served with white wine. Shallow depth of field is intentional."

Owning a restaurant is tough. It can be expensive just to get started and most restaurants fail within the first year. Black-owned restaurateurs face even greater challenges like lack of funding and resistance in certain neighborhoods, so when one does become successful, it deserves to be celebrated.

I’ve set out to find the best black-owned restaurants in every state across America, including restaurants that were founded generations ago and many that have opened recently. The restaurants included were selected based on a variety of factors, including historical significance, consistency and quality of the food, the impact the restaurant has had on its neighborhood and the value for the price, but the goal of this list is to serve as a reminder that black people are working hard across the United States to share their legacy and culture through food. Whether it’s through flavors rooted in the American south, cooking techniques from Ethiopia and Jamaica, or new culinary concepts, these black-owned restaurants have all earned support and recognition, and they’ve done so one plate at a time.

Known for fried and grilled seafood, this restaurant has won awards for having the best lunch in Birmingham. 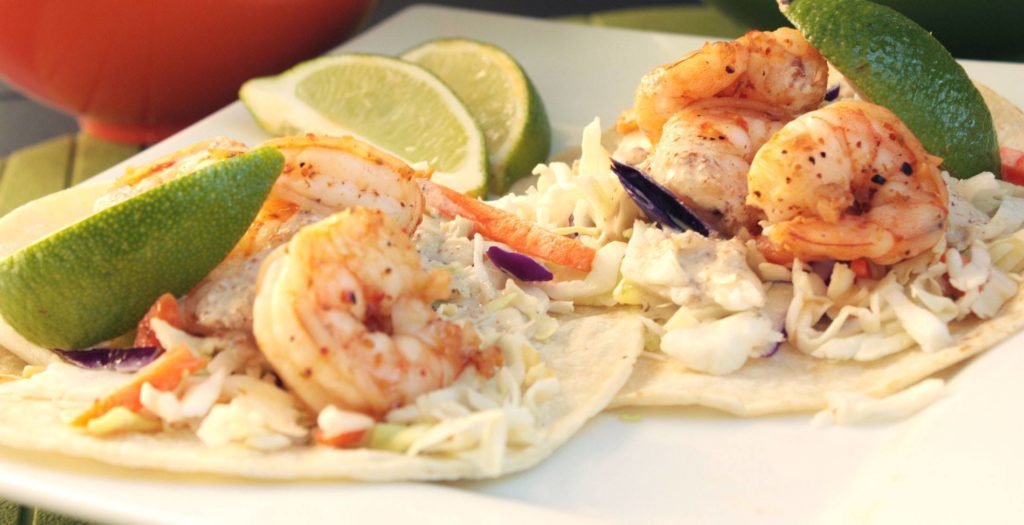 Located downtown, this is one of the few places where you can find southern food in Alaska.

This family-owned business can do everything from the signature dish to shrimp and grits, salads and all-day breakfast. You’ll want everything on this menu.

One of the most famous restaurants in Arkansas, the tiny BBQ joint won a James Beard Award in 2012 and dates back to 1910. Many believe it may be one of the oldest black-owned restaurants in the country, and when it comes to BBQ, it’s definitely one of the best.

Nyesha Arrington is one of the most important chefs working in California today and Native is an innovative tribute to the different cultures in Los Angeles. Located in Denver’s historically black Five Points neighborhood, people come to Welton’s for the food but stay for the loving environment.

The Ethiopian and Eritrean eatery is one of only a handful of black-owned restaurants in Stamford.

L&G opened in 2009 but recipes at this soul food and BBQ restaurant have been a family secret for years.

This Jamaican and Caribbean restaurant was in the Wynwood neighborhood for nearly 40 years before moving to Little Haiti. You won’t find better conch, jerk pork and oxtail in Miami.

It’s pretty much impossible to pick just one restaurant in Georgia, but Busy Bee runs through my veins and I dream about the banana pudding. Soul food is hard to come by in Hawaii, which makes Hughley’s selection of shrimp and grits, hush puppies, ribs and chicken and waffles extra special.

Owner Kibrom Milash went straight to Boise after immigrating to the U.S. in 2013 and has been serving East African flavors in Idaho ever since.

Travel Noire followers overwhelming suggested this spot for Illinois, which is known for its decadent French toast and waffles.

Everyone from Taraji P. Henson to Barack Obama has dined at this restaurant, which has been serving up dishes like fried catfish and smothered pork chops for more than 20 years. 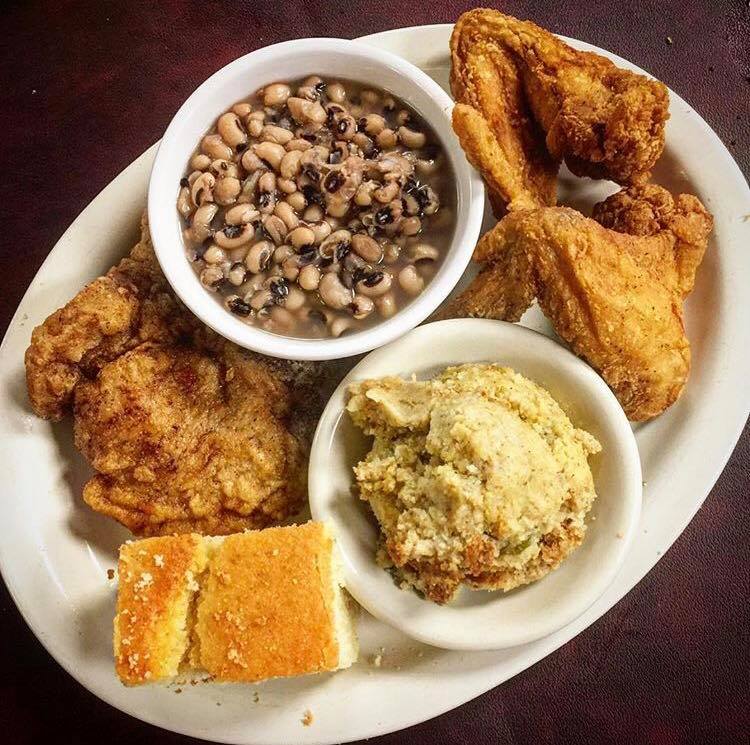 One bite of the fried chicken, mac n’ cheese and candied yams here and you would swear you were down south.

Sisters Mary Jones Mosley and Deborah Jones are making a name for themselves in the male-dominated world of Kansas BBQ.

Like Georgia, it’s impossible to narrow it down to just one restaurant in Louisiana. Dooky Chase opened its doors in 1941, and despite a two-year absence after Hurricane Katrina, it has been a beloved soul food staple ever since. This is the go-to place for top-rated Eritrean cuisine in Portland, though Red Sea comes a close second.

Boston isn’t known for having soul food, but the chef and owner Tony Books has been bringing down-home recipes and Caribbean staples to Cambridge for nearly 15 years.

Owned by celebrity chef Max Hardy, River Bistro is surprisingly one of the few black-owned contemporary restaurants in the area. Expect Caribbean-inspired goodness like jerk ribs and coconut and curry shrimp scampi. 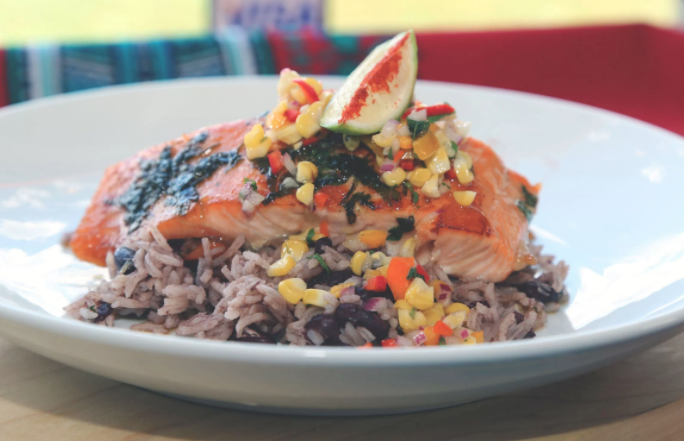 This restaurant offers globally inspired comfort food while also serving as a social enterprise that aims to help provide opportunities for those in the community.

Mississippi is home to some of the best black-owned soul food restaurants in the country, and Alma Jean’s has amassed a cult following thanks to dishes like the fried okra and smothered chicken.

If you want St. Louis-style barbeque, this is the place to go. Everyone in Missouri has heard of Smoki O’s and the rib tips, brisket and turkey are legendary. Of all of the states, Montana was one of the most difficult to find a black-owned restaurant. No soul food, no Ethiopian, no black-owned Cajun food…nothing. So difficult that the only one I could locate in the entire state isn’t open yet. Jah-T’aime was a beloved food truck in Hawaii, and the duo behind it relocated to Montana last summer with plans to open this spring. Good luck to them!

A former veteran, Justin Epting’s Quick Bites has only been around for less than two years, but it’s already a hit with locals thanks to the friendly service and down-home options like catfish nuggets and hot link sandwiches.

EllaEm’s holds its own in a foodie city like Las Vegas. Come here for steak, chicken and waffles, ribs and a lot of love.

If you don’t leave this family-owned restaurant happy and full, you would be the only one. Good luck finding better oxtail in New England.

This Jersey Shore restaurant has been around since 1990 and is known for pork chops, mac and cheese, fried porgy and an epic dessert menu.

Inspired by his upbringing in Lamu Island off the coast of Africa, chef and owner Ahmed Obo’s award-winning restaurant is African-Caribbean fusion food at its best.

History, cool vibe, great drinks and buttermilk fried chicken atop red velvet waffles? SoCo is easily one of the best brunch spots in the entire country. You’ll want to go with a group so you can try everything from the lobster shrimp & grits to the strawberry shortcake french toast, and I’m not kidding when I say you’ll be dreaming of those waffles for years. Simple and seasonal, the seafood at this tiny eatery is as fresh as it gets, with catches like perch, flounder and trout served with sides like fried veggies and slaw salad. Be sure to try the softshell crab when they’re in season!

The team behind this breakfast and lunch spot knows how to have fun with food. Expect dishes like breakfast pizza and grilled cheese, but it’s the waffle sandwiches and stacked pancakes and French toast that has made SuperChef’s a hit.

Off The Hook Seafood – Multiple Locations

The husband and wife duo behind this restaurant first started with a food truck before setting up shop at two locations. Here you’ll find treats like lobster grilled cheese, gumbo and soft shell crab po’ boy sandwiches, and that’s just the beginning.

I was pleasantly surprised by the vast number of black-owned eateries throughout Oregon, ranging from Ghanaian and Mauritian food carts to Ethiopian, soul food, Jamaican and BBQ restaurants. If you want to support a black-owned business and enjoy a slice from one of the first pizza restaurants in Portland, Amalfi’s is the place to go. Kiauna Floyd inherited the restaurant and has been doing her part to keep Italian food alive in Portland ever since.

The Bynum brothers know how to create sleek, stylish restaurants that all have roots in comfort cooking. South is a celebration of southern food and jazz music in an elegant, high-end setting.

Cape Verdean cuisine found a home in Rhode Island thanks to this restaurant where diners can get grilled octopus, simmered cod and other seafood delicacies.

A year after opening his Charleston eatery, Rodney Scott is a James Beard finalist and at the helm of one of the most influential restaurants in South Carolina. The restaurant’s design is mid-century modern, the BBQ is made on-site, and Rodney, even with all of the nationwide attention, has continued to keep his focus on the food. 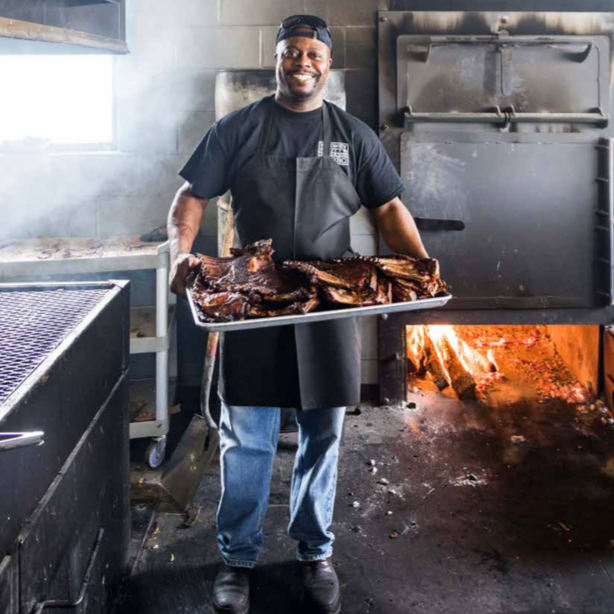 Omar Thornton is holding it down for black restaurateurs in South Dakota, serving up steak, seafood and a few southern staples at one of the only black-owned restaurants in the state.

The birthplace of hot chicken, nothing on earth can prepare you for the flavors coming out of this Nashville staple.

I know. Texas is home to some of the most iconic soul food and BBQ in the world, but with Houston’s Green Seed Vegan, Matti Merrell and Rodney Perry have made raw and vegan food sumptuous, accessible and enjoyable for people who would never dream of going vegan.

But this is Texas, and there’s no way I could leave off the legendary Gaitlin’s in Houston. The brisket and spare ribs there are in a league of their own. The owners of this restaurant appeared on an episode of Shark Tank where they introduced the world to their mango preserves.

Makini Howell is a superstar in Washington’s culinary scene thanks to her creative vegan dining concepts which include the upscale restaurant Plum Bistro, the Plum Burgers food truck, an ice cream shop called Sugar Plum and more. Sumthin’ Good hasn’t been open long, but the soul food restaurant has already found a loyal following that’s devoted to owner Denise Jones and her cooking.

Upscale seafood with roots in Cajun and soul is the best way to describe this popular Milwaukee eatery, which is owned by two young, self-taught black chefs.

You’ll need access to the Air Force base to try one of the only soul food restaurants in the state of Wyoming.

There’s no real way to pick just one black-owned restaurant in a town that has so many great options to choose from, but with roots that date back to 1944, Florida Avenue Grill is a landmark that everyone should visit at least once.