6 Reasons Why You Need To Visit Guadeloupe This Year

When I stepped off Norweigan’s massive aircraft, I was met with the warm hug of Caribbean air. “Bonsoir!” said the customs agent to my group of seven at the tiny airport. We’d landed in Pointe-à-Pitre, Guadeloupe for the first time. We didn’t know what we were getting into when we made the decision to visit the small island. Some of us hadn’t even heard of the French Caribbean island. What we did know is that as a group, we were exhausted and overworked in our tech, music and medical fields and all needed a break. Norweigan had flights for just more than $70.00 each way leaving from New York, so we took a leap and decided we had nothing to lose.

We were right. For five days we explored the gorgeous Grande-Terre; the eastern part of the island that embraced us with scenic views, sounds of Zouk and unforgettable cuisine. We stayed in Le Gosier, a popular beach town along the coast lined with the silhouetted mountain views of Basse-Terre, which houses the island’s rainforests and volcanoes. From jet skiing to the separate island of ilet du gosier to dancing the night away at Le Club (literally called “The Club”) to midnight strolls on the beach with one too many le planteurs in our systems, our stay was a memorable one and the best sporadic decision we’d ever made.

If you’re on a quest for a dream vacation that won’t break the bank, here are six reasons the Caribbean’s best-kept secret is the place for you. The beaches are unlike any you’ve seen.

Guadeloupe boasts beautiful white sand beaches and turquoise water, and there are plenty of beaches to choose from. Most of the day they remain quiet since the island has not yet become consumed by American tourists. Even better, while the larger beaches of Plage de la Datcha in Le Gosier and Grand Anse are popular, there are dozens of small private beaches scattered along the island. My group stayed in the community of Vinaigri, which had a private beach that showcased both the gorgeous reefs and mountain views on the island. Whether you’re going on a girls trip or a baecation, you can get luxury for less in Guadeloupe. The alcohol is cheap and plentiful.

If your intent is to get super lit while on vacation, Guadeloupe is the perfect spot for you.

Their libation of choice is rum and whether you prefer it straight or in their signature drink Le Ti Punch, you’ll find it everywhere. Produced on almost every commune on the island, their local brand “Rhum Bologne” is an intense 55 proof rum that will only cost you about 7 Euro for a magnum bottle. At a bar, you’ll average about 3 Euro per drink and with Rhum Bologne as the base, you’ll only need one to get turned up.

Creole cuisine is already incredible, but with the infusion of Guadeloupe’s local ingredients including passionfruit, saffron and colombo, the food on the island is next level. You’ll fall in love with Accras et sauce chien – a type of cod fritter that is served with a vinegar based concoction infused with carrots, onions, peppers and more. Close out your meal with poisson (fish) in coconut curry saffron or perfectly grilled brochette de poulet (chicken skewers) and you’ll be trading in your U.S. passport for a permanent stay in Gwada. 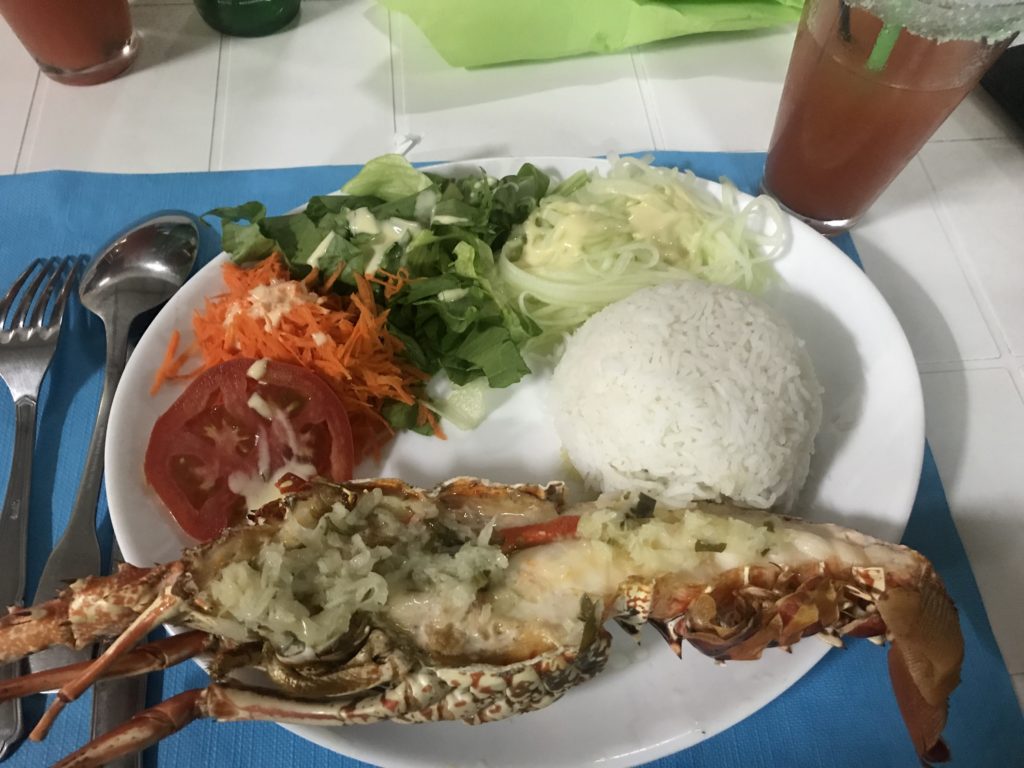 The island is extremely rich in culture.

Guadeloupe is home to numerous preserved slave plantations (some have even been converted to hotels) and dozens of museums that give you a deep dive into the history of the island. Known for farming sugar cane and coffee, locals take serious pride in their culture and the hard work that has come from the perils it faced centuries ago. A walk down La Datcha on a Friday afternoon will land you amidst a weekly market with locally produced goods, while a drive around Sainte-Anne will highlight the sugar cane fields (now used for rum), the beautifully designed, above-ground cemeteries and the slave cemetery along the beach of L’Anse Sainte-Marguerite. 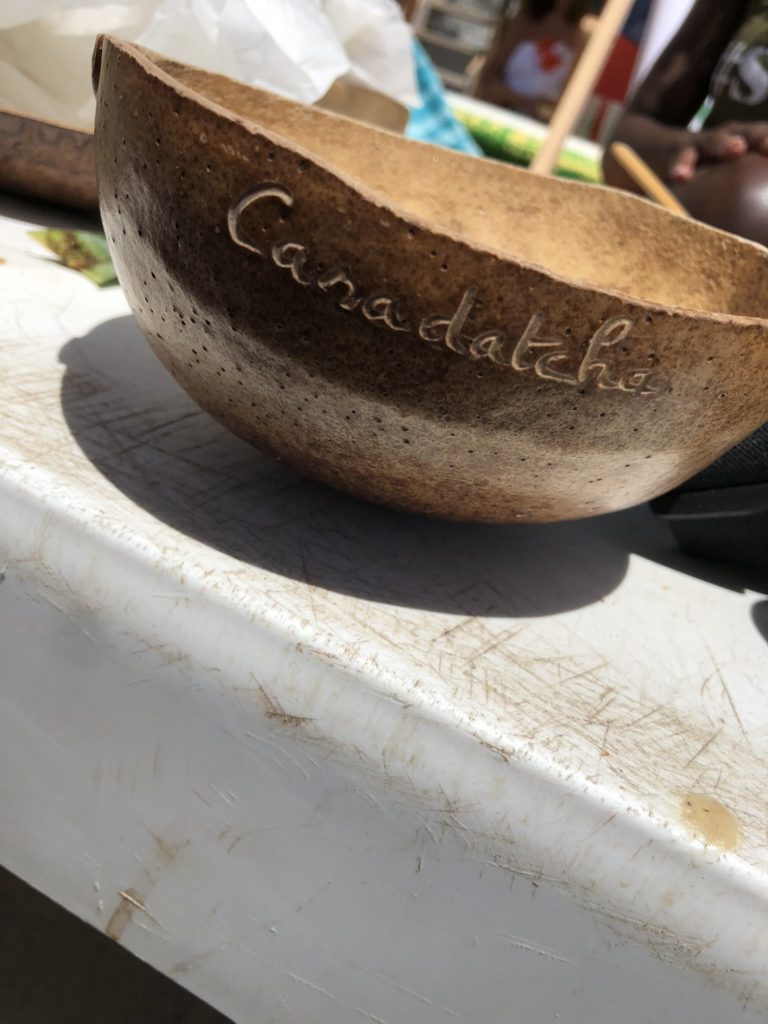 The locals are kind and welcoming.

Supporting local businesses was important to my group and the hospitality of the locals made it easy to do just that.  Language barriers were often difficult, but they were patient with the seven “happy Americans” that visited their establishments. We were offered free drinks and food at every restaurant and listened as business owners that moved from all over the world to Guadeloupe shared stories of their lives and the island’s history with us. Everyone made sure we were comfortable and felt at home at all times, despite our differences.

You’ll leave knowing quite a bit of French.

Guadeloupe is a French island, thus the residents predominantly speak French (and some Creole). We only met a handful of natives that spoke any English, so communicating was an adventure. Pointing and hand gestures saved us, but after a few days you’ll pick up the essentials to get you maneuvering through very basic conversations. By the end of my trip I officially know how to order the fish of the day and say “no more rum” in French.

I’m currently planning my trip back to the island so if you’re with me and now want to visit, here are a few tips and places to visit while you’re there.

Tips to make your first trip to Guadeloupe a breeze:

There are various reviews that will tell you that a vehicle isn’t necessary, but unless you’re staying along the walking strips of La Datcha or Sainte-Anne, you’ll want a car. Taxis are only frequent at the airport, so save yourself the sunburn and plan for a vehicle ahead of time. Check out SIXT.com for good deals on rentals. Exchange currency ahead of time

This surprised me because on all of my trips I’ve changed currency locally, but in Guadeloupe, currency exchange places are scarce. The airport’s exchange site is the only one open seven days, however, the exchange rate and commission will cost you a pretty penny. Order Euro at your bank before your trip to save a few dollars.

Brush up on your French

Very few people on the island speak a language other than French (besides some Creole, which saved us on our trip) so before traveling, brush up on the language. It makes ordering food and booking excursions much easier. You can study for free on iTunesU if you’re an iPHONE user or download the Google Translate app for a full French language download.

Memorial ACTe Museum: The only museum with self-guided headsets available in English.

Distellerie Damoiseau: This rum distillery is self-guided and you witness the rum being made from scratch. At the end of your tour, you can taste the finished product.

In the end, five days wasn’t enough for us to take in the island the way we hoped, so we’ll be going back sooner than later to ball on a budget one more time.