Overcoming Hiccups in Your Trip

Traveling is an exciting and memorable time when you have the chance to do it. That feeling you get in the pit of your stomach when you finally book that trip. How you’re always aware of the calendar date as you’ve been counting down till you leave for your trip since you hit the purchase button online. In your mind this vacation is just what you need, a refreshing amount of time away from your everyday life to replace with a white sand beach, or enjoying wine country in California. Whatever it is, when it comes to vacations, most of us just want to relax, do what we want, when we want to and be stress free. Now, this isn’t always the case. In fact, I think most of my trips have been rudely interrupted with some type of stressful or even scary nonsense. I think having your nerves and patience pushed to the limit during travels just comes with the territory at some point. So, the universe has decided to make its own plan for you and although it can be upsetting, finding the bright side of it all, keeps your trip more memorable than you could imagine. The best thing is to learn how to adapt to changes to your plans, go with the flow, and to look for ways to turn those traveling woes around.

I have had several things go wrong during my travels, but my scariest moment was last year, during my first solo and international trip to the Philippines. Some locals told me of some exceptional places to visit, so I decided to take a last minute trip to see the rice terraces. Now, this was meant to be a day trip, as I had to be back in time to catch a flight to Boracay island the next morning.

The plan was to take a midnight 5 hour bus to Baguio city, where I would transfer and take a 20 minute ride to my final destination, the rice terraces. I was all set; at least I thought I was. Two hours into the trip, a few teachers coming back from Thailand sat next to me and in my discussion of my plans for the day, informed me that the second bus I needed to take to the rice terraces was actually a 7 hour bus ride once I transferred in Baguio to get to the rice terrace. What!? 7 hours? – I freaked out.

There is no way I would have time for that! And how the heck did I miss knowing about this part of the trip anyway? I obviously didn’t do the adequate research I thought I had done. 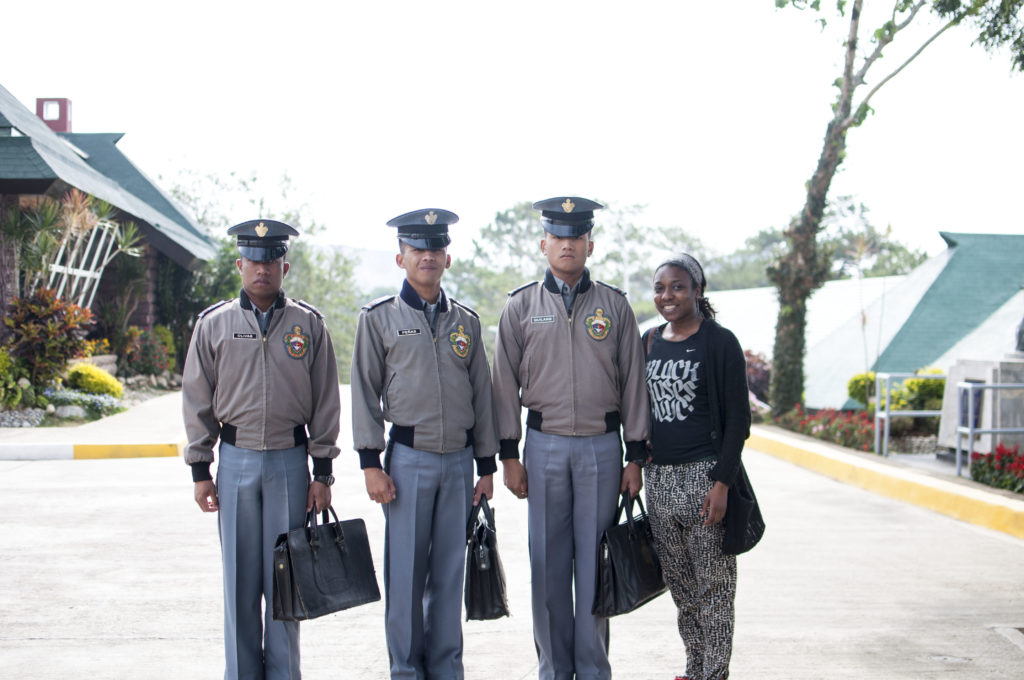 Besides the fact of becoming increasingly bummed with the realization I wouldn’t make it to the rice terraces, one of the wonders of the world, I was beginning to panic. I hadn’t done any search on Baguio because I had no plans on being there out side of the transfer. The only thing I was told about Baguio was that there were a lot of pick pockets.

It was 3am, too late to reach anyone, I had no clue where I was nor where I was going. I was worried, yes, but I was stuck on a speeding bus in the middle of the night and there was nothing I could do but sit back and enjoy the winding ride. The teachers were kind enough to offer a list of things to do, if I decided to spend the day in Baguio. When we finally reached the last stop, Baguio city, it was still dark out. Was I to waste all that time and money and jump right back on the next bus going to Bulacan? Or, do I try to make light of the situation and see what Baguio had to offer.

Bagiou is a place Filipinos go to enjoy the cooler climate of the Philippines. The bus terminal was packed with locals. The loud speaker screamed in Tagalog and I was completely lost (in what to do, that is). That was, until I saw someone I was pretty certain was American. I knew if I situated myself close enough to this person they would start a conversation with me, and I was totally right. He was originally from Upstate NY, but lived in the Philippines with his Filipino wife. After telling him my dilemma and confirming the long trip I had, he suggested letting his nephew, who was dropping them off at the bus station, to take me around town in his car, if I was willing to contribute gas money. Now, I wouldn’t suggest jumping in the car with any stranger, but I do know one thing I’m good at and that’s picking up on vibes; I think that’s from living in NYC the past 14 years. At this point it was worth being open minded. I sat down with his nephew to feel him out.

After about 30 minutes of great conversation, I felt at ease and took up his uncle’s offer. Without telling him anything about where I wanted to go, he drove to the most amazing sites. He told me the history behind everywhere we went and his own stories of growing up there. This place was magical and unlike any area I had been thus far in the Philippines. It was green and lush, moist, mountainous, rich and cool. I had such a fun time and had forgotten all about being scared or disappointed my plans didn’t work out. My new tour guide friend took me back to the bus station, bid me farewell and I was once again on a crazy 5 hour bus ride back to where I started just hours before. It worked out perfectly! The experience was definitely uneasy and scary for me in the beginning. Not knowing where you are, and having a language barrier all in the middle of the night will definitely have your nerves jumping, but I wouldn’t have seen this beautiful city otherwise.  I’ve learned that with any situation, new opportunities arise, you just have to see it and be open to new plans and different adventures. Now, this crazy day is one of my favorite memories of my 2-week trip in the Philippines.  Make every minute of your time away count, don’t get too bent up on changes and grab onto any moment that comes, even the unexpected ones. You’ll have a great story to tell later. Now, travel on!!