Tattoo Rituals From Around The World: A Deeper Look

From the time Kayo Hall started working as a tattoo artist ten years ago, he always felt a sense of community. Having worked in different cultural settings, he understood that tattoos bring people together and allow them to tell their stories.

At first Kayo, a Fresno, California native, worked in a tattoo shop with predominantly Mexican artists. “Mexican culture is very family-oriented; they have a certain level of pride in how they do things,” he tells Travel Noire. “Family is everything to them, and that’s how I felt at that shop.”

Today, Kayo works at Black Ink Atlanta, a black-owned tattoo shop made popular by the reality television show Black Ink Crew, with locations in New York and New Orleans as well. While tattooing a cover-up on my back as a remembrance to my dad, he talked about who influenced his love for the art of tattooing. 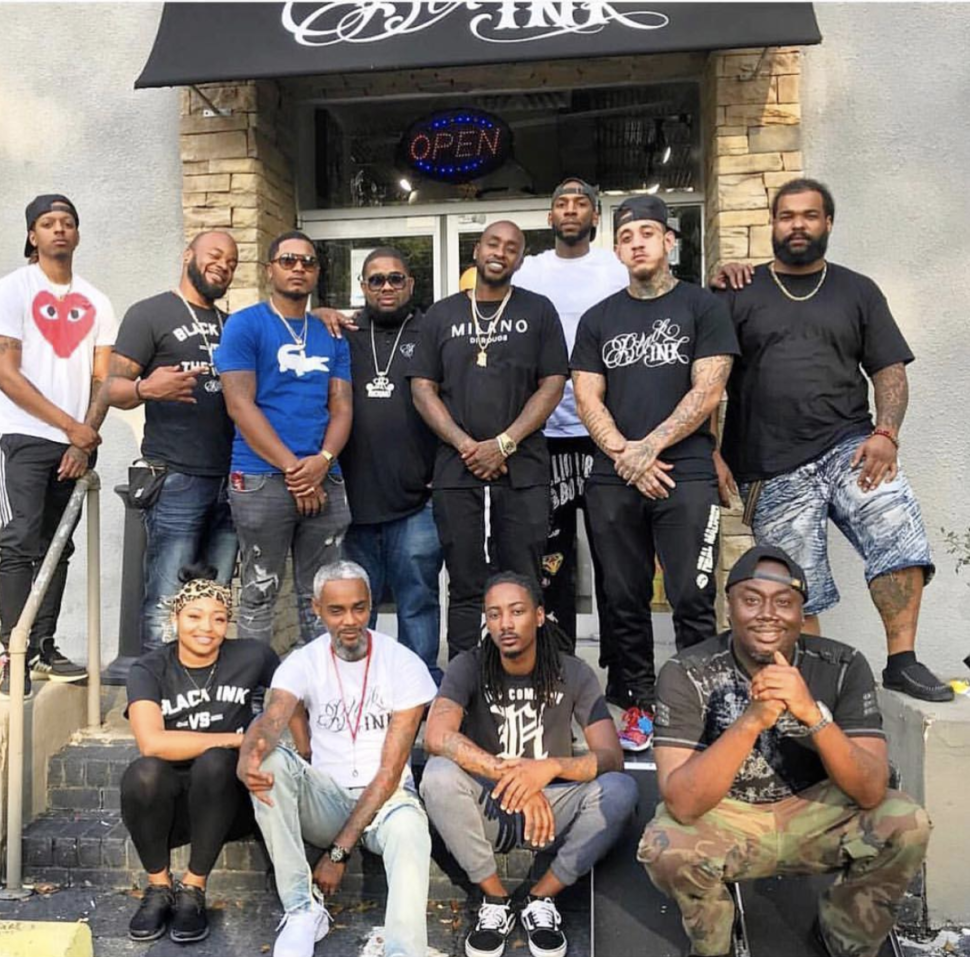 “I’ve watched a lot of guys from the U.K. They are like pioneers of everything and some of the best artists in the world,” he says. “They don’t really fall into boxes (discussing the types of tattoos artists typically do).”

A global tattoo survey found that 38 percent of respondents have at least one tattoo. That’s 38 percent of people on earth with body art. The art has definitely evolved since its first emergence almost 5,000 years ago (allegedly) found through a mummy with 60 visible tattoos.

Tattoo culture has come a long way from its first iteration to its legalization to the prominent position it plays in popular culture all across the world. The word “tattoo” derives from the Polynesian word tatau, meaning to strike (ta) and mark (tau). So it’s only right that Polynesian culture is where we begin. 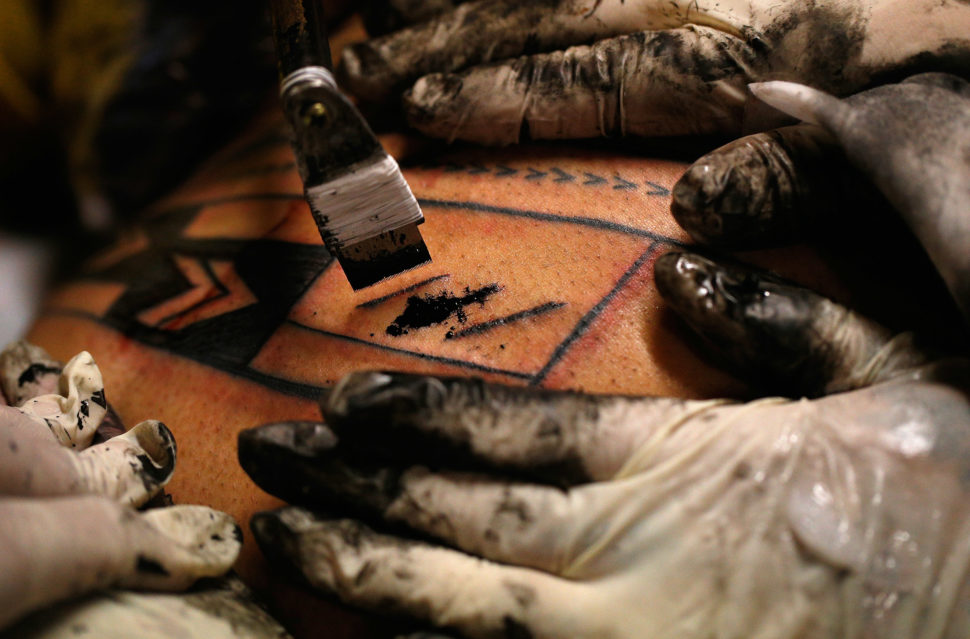 The tattoo design is initially outlined with charcoal, then completed with a chisel and mallet or a needle, made from shark teeth, bamboo and turtle shell. The process cuts the skin and injects the ink, made from burned dust grime from candlenut (Aleurites moluccana), and mixed with oil, sugar cane juice, and coconut milk/water and plant-based liquids.

In Polynesian culture, there are separate meaning and styles for men and women. For men ages 14-18, tattoos were a right of passage and the age where they hoped men would stop growing. Women would receive delicate designs on their hands and the malu on the thighs, seen during traditional Samoan dance siva. The men’s style is represented by chunky blocks.

Rihanna received a traditional Maori tattoo in honor of her trip to New Zealand. According to a global tattoo survey, Italy has the highest percentage rate of heavily tattooed people at 48 percent. Brittany Riley has always been “enamored by the art of tattooing.” She recently moved to Italy from Oahu, Hawaii, to a similar heavily tattooed culture. She gave herself her first tattoo using Indian ink and a needle.

“I remember saying to my mom as a little 6-year-old how I was going to get my tongue pierced and tattoo as soon as I was old enough and sure enough that’s exactly what I did,” Riley tells Travel Noire.

She sees tattooing as a canvas of art that should be spread across the world for all to see, however, her religious parents did not agree. “I was taught that my body is a temple and that I shouldn’t destroy it and I always remember thinking ‘well my body is a temple, let me spruce it up and put my mark on it,’ “ she says.

“It’s my body, my temple and I don’t see what I’m doing as degrading it, more so enhancing it. My mom is accepting of it and has actually gotten five tattoos, while my dad refuses to acknowledge that I even have them and one is a big sleeve!”

She paid over $1,000 = 900 Euro for a tattoo of a fresh painting with pastel colors and thin lining. In Thailand, Buddhist monks would mark their bodies as symbols of protection. Similarly, Thai warriors covered their entire bodies from head-to-toe in ink, believing it offered protection from death and danger and brought power and courage.

Visitors in Thailand are encouraged to get their own traditional Sak Yant tattoo at the temple of Wat Bang Phra, located outside of Bangkok. It acts as a temple for monks to reside and meditate but also as a tattoo parlor. Although they can be done with an electric machine, tattoos in Thailand are traditionally done using a two-foot-long bamboo stick or needle, piercing the skin until it is complete.

The artist must run a knife over the neck of the person being tattooed to protect them from harm. Tattoos prices are also significantly cheaper than anywhere else in the world.

Thai culture is very particular about tattoo placement. The head is considered the most sacred part of the body, while anything on the feet is seen as disrespectful. The Thai culture ministry has gone as far as to create guidelines in the hope of banning tattoo parlors from tattooing images sacred to Buddhism. The mandala is a series of flowing lines and shapes radiating out of a circle representing eternity and completion. Buddhists often incorporate the mandala into their rituals and meditations sessions to help align the body and mine.

Toni Smith a member of the US Army flew Thailand to get a Sak Yant tattoo. Normally done by monks inside a temple with a bamboo stick, of course with proper planning. In short notice, she found a nearby shop that did tattoos with bamboo sticks. She said it means peace and to teach others and was much less painful than a tattoo gun.

“I wanted something different and when I looked up what it meant, the definition behind it. It was talking about me and how I continue wanting to be. So I thought it was dope.”

Tattoos in the Philippines 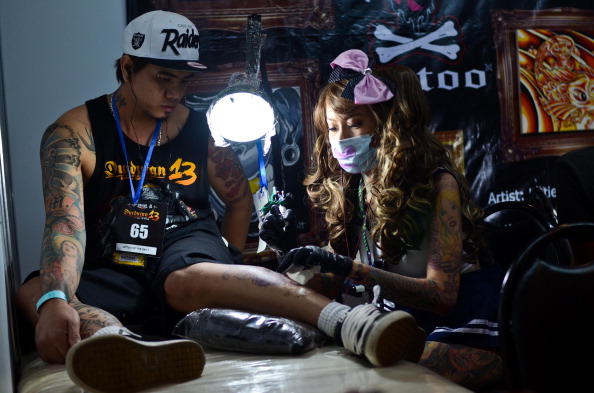 In the Philippines, the traditional style of tattooing involves a bamboo stick dipped in wet charcoal and the spike of a lime (calmansi) tree. The designs are reflective of nature’s habitat and the mountains of Cordilleras and geometric patterns like squares and diamonds.

The process is extremely painful and should only be endured for short periods of time. There’s a large Filipino presence in Los Angeles seeking to preserve the cultural tradition and its art through the Tatak Ng Apat na Alon, which means “Mark of the Four Waves Tribe.”

The oldest living tattoo artist in the Phillippines Whang Od Oggay still gets tattoos at 100 years old, while training her family members to continue on the tradition of keeping tribal art alive. She uses a thorn from a pomelo tree, a bamboo stick, and homemade coal water ink.

The Philippines is also home to many modern tattoo conventions and some world-renowned contemporary tattoo artists. The tattoo culture in Russia has various meanings, crafted from multiple inspirations and generations with a negative connotation. Many Russian tattoos come from religious beliefs, acts of rebellion, or have a connection to Russia’s criminal activity.

Temhota tattoos are common amongst prisoners and criminals, meaning darkness. Each tattoo tells a story about family relationships, crimes committed, drug addictions, prison rank, etc. Convicted burglars often had tattoos of pirates with an earring. An eight-pointed star means known world thief and a snake is used to illustrate drug addiction. Normally a swastika is correlated to Nazi’s. However, in Russia tattoo culture, it means hatred for prison guards, who act like Nazi generals.

Some of these tattoos are done unprofessionally, in prisons with an electric shaver, a needle, and liquid dye, according to the Moscow Times. These negative connotations have caused a wedge between the older and newer generations of Russia in different cities.

Today, millennials in Russia don’t necessarily associate individuals with the history of tattooing. For them, tattoos are purely served for artistic purposes.

Although the tattoo culture in Yakutsk is small yet famous, artist Alenda Wedderburn got a firsthand look at nonprofessional tattooing, sometimes due to a shortage of proper equipment.

“We don’t have a tattoo supplies store, we had to order it online and wait for weeks. So I’d say it’s difficult for tattoo artists to be free when it comes to supplies.” Born and raised in Yakutia, a tiny village in the Republic of Sakha, she mentioned the lack of proper care for tattoos but also for the individuals receiving them.

“Tattoo industry in this small city is famous. But there are a lot of unprofessional people (aka scratchers) ruining people’s body. But let’s be honest they are everywhere,” she says.