For the women who attended, Black Girl Beach Day was a day focused on celebrating and promoting inclusivity, solidarity, and sisterhood amongst all black women.

Black creatives Snap Lancaster and Christina Bright came up with an idea to empower women in a much broader sense and in a larger space that allowed them to be themselves in a carefree way.

“We wanted to make sure we had an event that was authentic and had no requirements aside from being a woman or identifying as a woman and being a person of color,” Bright says. “It was just a celebration of us, period.”

The two women created a flyer, sought after vendors and hosts and used their social media platforms to spread the word, flooding Belmar Beach in New Jersey with all shades and sizes of melanin. For Lancaster, it was an indescribable feeling, explaining how emotional she was. “I was such a big crybaby that day because it was so beautiful to see a group that large just enjoying themselves in just a natural element,” she says. “It was amazing, so yeah I cried.”

The day was a success for the 350 women including specific programs catered towards women such as tarot card readings, yoga sessions, an intention workshop, a friendly game of volleyball and pure carefree black girl fun. What the women didn’t expect, however, was the harassment and ridicule received from local police.

Within five minutes of setting up their equipment, the group was approached by local police officers and questioned about the legitimacy of the event and the large crowd. Lancaster and Bright both recalled the police riding around in beach cars, continuously checking guests badges, which were given out upon entry to the beach. Bright shared a video of the experience on her Instagram page.

“I immediately got into protector mom mode, and I made it my business to talk to the police. I had this anxiety because I know how quickly things can go left with the police and people who don’t want us quote-unquote in their space,” Bright says. “You know any time they see us enjoying ourselves or doing something that they are not apart of, they are afraid.”

Lancaster felt slightly harassed due to the approach and their language of the police, mentioning that the police were focused on their group specifically, and not the other people on the beach. “So it was verging harassment the way they were interacting with us. They were using terms like ‘de-escalate’ and we just felt extremely uncomfortable,” she says. “Even though the day persisted and we still had a great day.”

The women simply intended to create a safe space for black women where “we can relax and be ourselves. Where popularity doesn’t matter, where your follower count doesn’t matter,” Bright says. 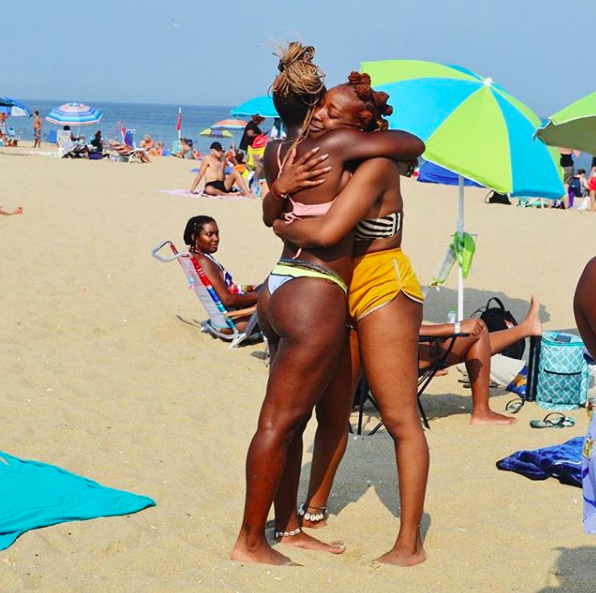 Lancaster and Bright have absolutely no intentions of allowing this one discrepancy to halt their plans for expanding of Black Girl Beach Day. They want to make sure what happened to them in New Jersey doesn’t happen to anyone else. For them, the most important thing is maintaining that safe space. “Without that, we don’t have an event. We don’t have Black Girl Beach Day,” Lancaster says.

The two women have been in high demand since news broke about their event and have plans for expansions possibly to London, Africa and more. “Everywhere has a beach and everyone needs this space,” Lancaster says.

For more updates on the next Black Girl Beach Day and merchandise, stay tuned to their website here or on Facebook.