50 in 50: The Best Chicken And Waffles In Each State

Chicken and Waffles has become such a staple in American cuisine that you can find restaurants from all over the world who have become inspired by this Southern comfort food.  Whether you’re looking for breakfast, lunch, brunch or dinner, here’s where you can find the best chicken and waffles in every state:

Yo Mama’s Restaurant in Birmingham allows you to enjoy both this dish and live music at the same time.

If you don’t think there is a want for chicken and waffles in Alaska, think again.  Served with gravy and French Fries, Waffle Rush in Anchorage is where people go. Located in Phoenix, Lo-Lo’s Chicken & Waffles has a recipe made from scratch.

CeCe’s Chicken N Waffles located in Conway offers a casual sit down restaurant for people who want to enjoy their sweet version of chicken n waffles.

Keith’s Chicken and Waffles in Dale City is inspired by African American southern roots, according to its website.  Comfort food is what they are all about.

Bacon Social House located in Denver has won the diner’s choice award for three years in a row from Open Table.  With that, it’s pretty self explanatory why you should try them for your Chicken and Waffles. 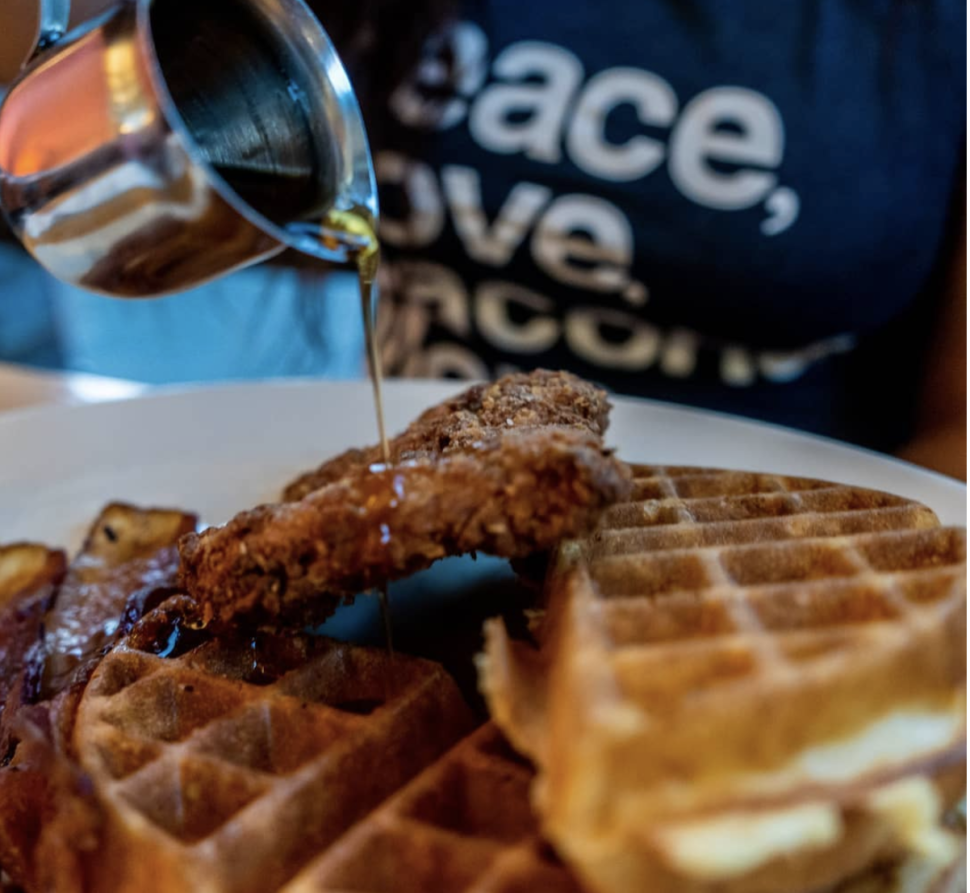 Cheeks Chicken & Waffles in Manchester is an East Coast food chain that prides itself on “fresh and never frozen” chicken and waffles.

8th and Union in Wilmington puts a twist on chicken and waffles up by adding a sunny side up egg, ham and Béarnaise sauce to the dish.

What customers love the most about Tony’s Chicken and Waffles in Bartow is the quality of both food and service.

Atlanta Breakfast Club in Mid-Town is known to bring good service and even better chicken and waffles to the table in Atlanta.

Have you ever tried a popular American dish with island flair? If not, look no further.  The Nook Neighborhood Bistro, located in Honolulu, pairs an American classic with island ingredients. 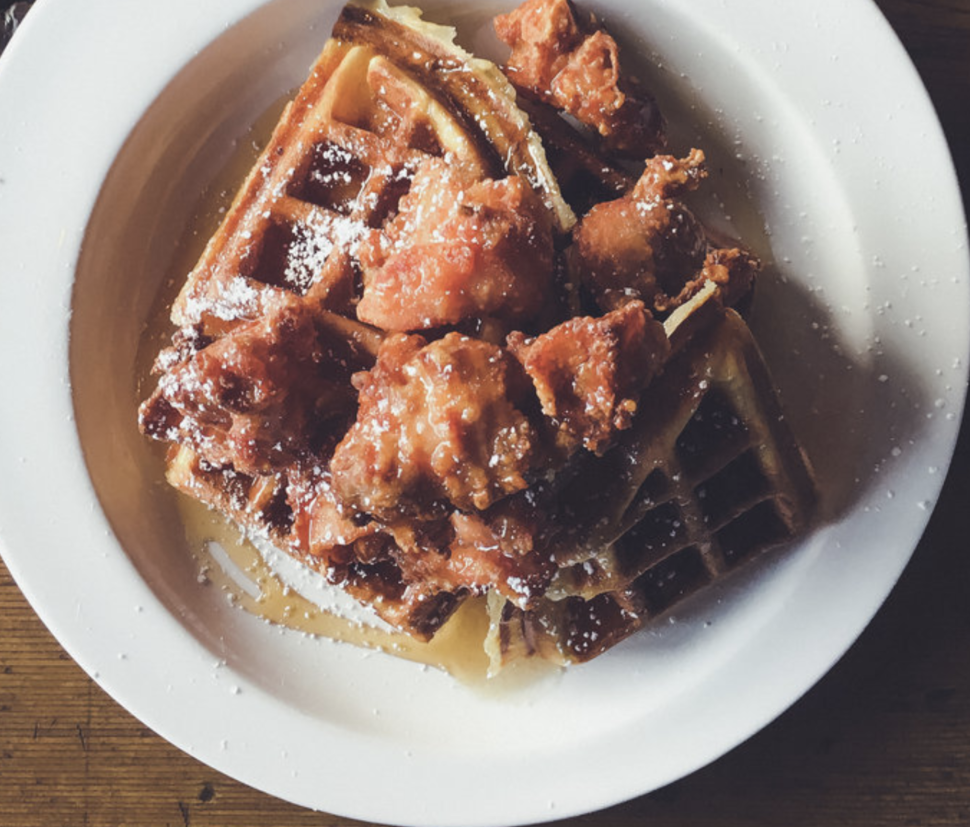 At Abracadabras in Idaho Falls, you get a nice size proportion for a great price that will allow you to share (or not) your chicken and waffles.

No matter how many times you hear or see it, Chicago’s Home of Chicken & Waffles never gets old–and for good reason. Their chicken and waffles are the creme of the crop!

Located at 30th and Shadeland Avenue on the east side of Indianapolis, His Place Eatery is a unique experience in Soul Food.  Their chicken and waffles are made standard or with red velvet batter.

SUGAPEACH in Cedar Rapids will put a smile on the face of passionate fried chicken and waffle connoisseurs!

The Doo-Dah Diner in Wichita pours sausage gravy over its chicken and serves the waffle with a side of chocolate-coated bacon. Unconventional, but it consistently receives rave reviews. A must-try. Louisville’s Silver Dollar Diner is known for bourbon and its chicken ‘n’ waffles that are considered a staple in the community.

With a name like Ma Momma’s House, it’s pretty self explanatory why this should be one of your first stops in New Orleans for chicken and waffles.

Hot Suppa’s menu features all made from scratch items and quality ingredients.  Local goods are used whenever possible, including in the chicken and waffles. You will taste the difference.

Ida B’s Table in Charm City serves Chicken and Waffles with a sweet potato waffle and rosemary maple syrup on the side.

Darryl’s Corner Bar & Kitchen, known as DCBK, serves up great southern comfort food and signature cocktails with a side of some of the best jazz in Boston. Midwesterners love their gravy so it comes to no surprise that  The Lowry in Minneapolis adds syrup and gravy to this dish.

Velma Jeans in Tylertown is one of few places that has 5 out of 5 stars for reviews so be sure to bring your appetite for the restaurants famous red velvet chicken and waffles. 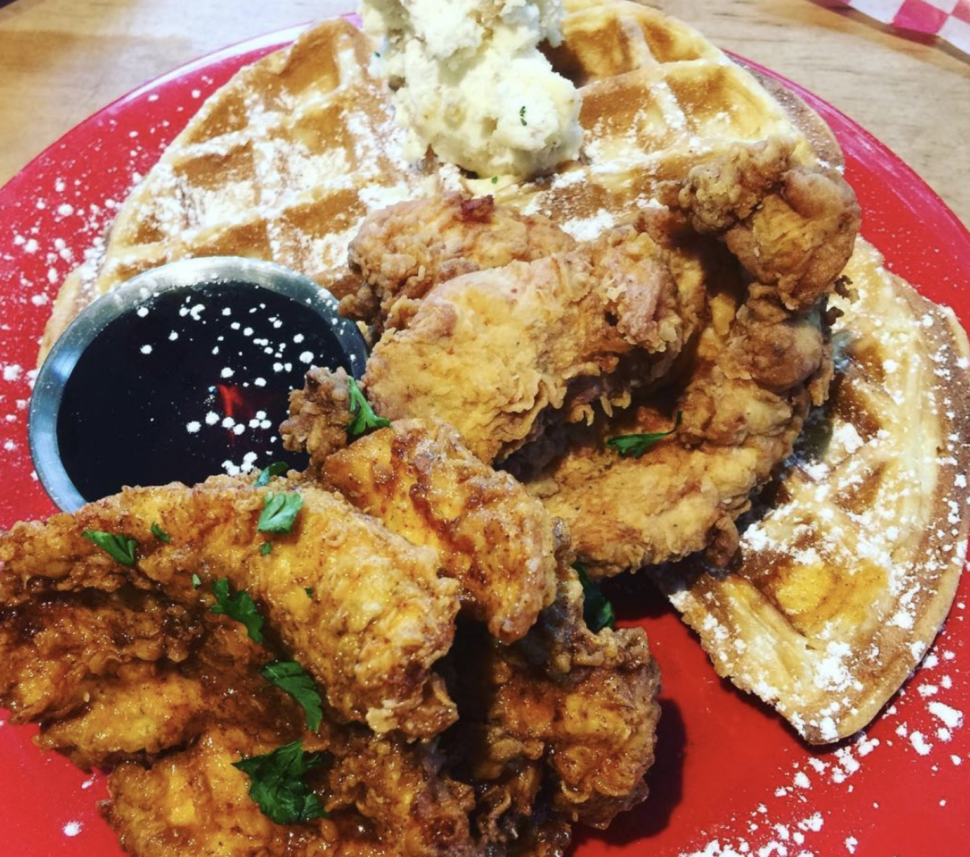 The Chicken and Waffles at Overeasy in Omaha are dipped in buttermilk , fried, with savory egg waffle and seasonal fruit.  You can also try it spicy!

What began as an idea for a recipe that offered a not-so-sweet waffle has now become what Bruxie is widely known for: A Chicken & Waffle Sandwich.

Don’t knock it until you try it: the Friendly Toast in Portsmouth is where you will find chicken and waffles paired with mashed chipotle sweet potatoes, layers of waffle wedges, bacon & southern fried chicken thighs topped with hot honey, zesty maple sour cream & scallions.

Fresh and never frozen with a touch of Southern flare is what you will get at Cheeks’ Chicken & Waffles.

Frank’s Famous Chicken & Waffles in Albuquerque is known for its chicken and waffles.

Sweet Chick in New York City is known for its chicken and waffles! They offer so many options from classic waffles to bacon-cheddar, dried cherry, rosemary-mushroom, apple cinnamon or spiced-pecan. 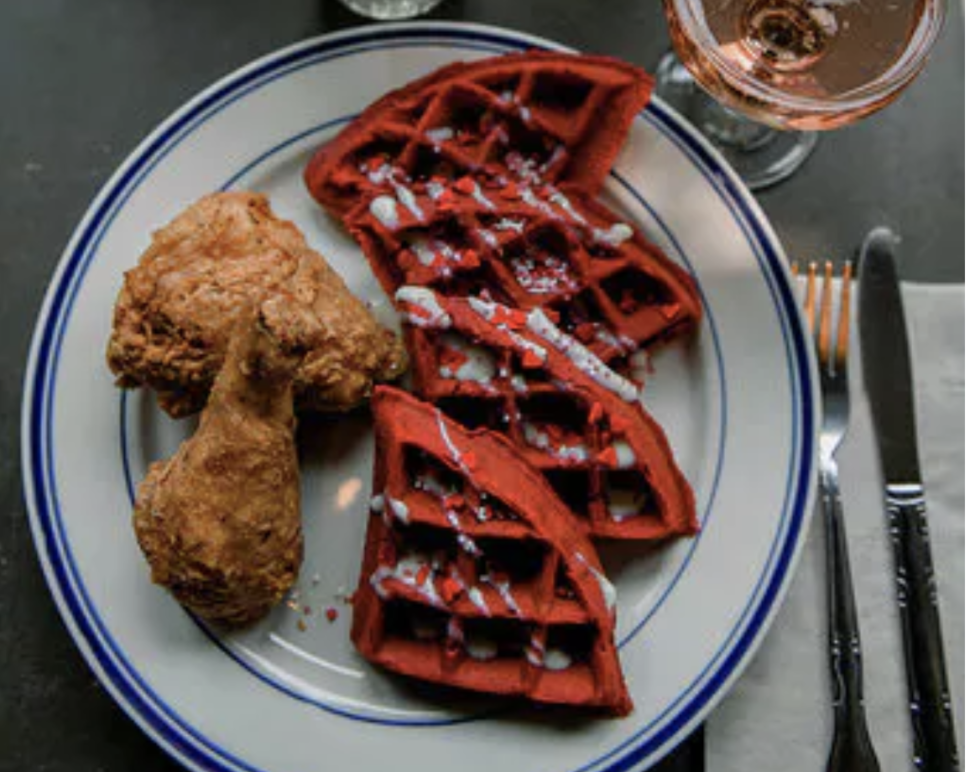 Dame’s Chicken & Waffles in Greensboro offers someone for everyone, including a vegan, sweet potato, and ginger bread option.

The Boiler Room in Fargo serves its chicken and waffles with gravy and a side of fruit.

Zanzibar in Shaker Heights is an elegant eatery with a classy ambiance to re-invent soul food. Lucky for you, that reinvention doesn’t involve getting rid of staples like Chicken and Waffles.

Mama E’s started over a decade ago with only wings and waffles.  Even though the restaurant has expanded to offer more options, you want to try their original dish.

It’s the sweet potato waffle that keeps those in Portland craving Screen Door!

In the middle of Reading Terminal Market in Center City Philadelphia is the Keven Parker Soul Food Cafe.  You can catch a vibe while lounging in the café while enjoying their mini chicken and waffles. 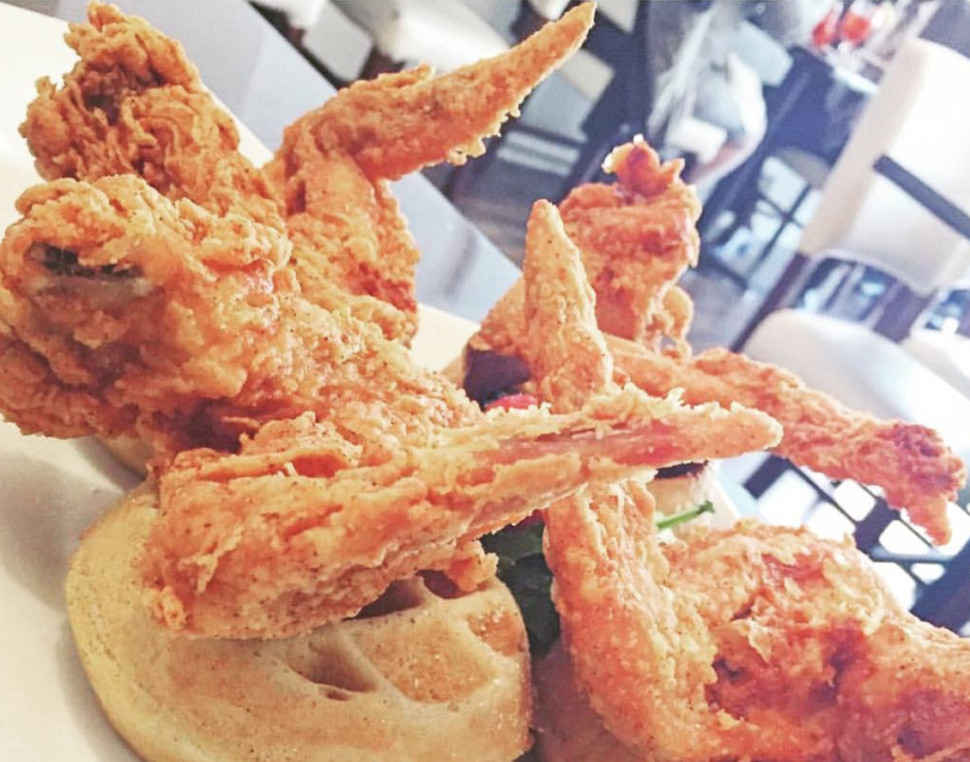 Considered a “match made in heaven,” Bucktown in Providence keeps this classic dish traditional served with maple syrup.

If you weren’t sure about your love for Kiki before, just wait until you try her version of chicken and waffles. Located in Colombia, Kiki’s Chicken and Waffles’ slogan is “Hands Down The Best Soul Food In Town!”

The Phillips Avenue Diner in Sioux Falls is served with pecan butter: that a lot makes it the best.

Because you can’t go to Tennessee and not experience hot chicken, make sure you’re pairing it with a waffle at Hattie B’s Hot Chicken in Nashville.

It’s often hard to get a spot at the Breakfast Klub in Houston without a long wait but it is definitely worth it for its Wings and Waffles. The best part about the fluffy waffle and juicy tenders at Pig & A Jelly Jar in Salt Lake City is that there’s a “cluckin’ good deal” on Thursdays from 3 p.m. until 9 p.m. where you get this popular dish for $5.

Chefs at !Duino! (Duende) in Burlington create dishes inspired by cultures from all over the world.  One dish that remains popular is its sausage gravy-covered chicken and waffles. Thank us later.

J & K Style Grille is a food truck in Virginia Beach.  You have options here including its popular waffleburger or chicken and waffles.

What’s interesting about Sisters and Brothers Bar in Seattle is that they allow you to pick your heat level for chicken from insane, hot, mild and naked while pairing it with a buttermilk waffle, whiskey honey butter and maple syrup. Don’t let the Appalachia state fool you.  Voted as one of the most unique places to dine in West Virginia, Christopher Eats in Barboursville has a special recipe that will have you wanting more.

Located in Appleton, Cozzy Corner is a family owned and operated restaurant that is known for its juicy chicken tenders and fluffy waffles.

Located near Town Square in Jackson Hole is Cafe Genevieve where you will find  inspired home cooked classics,” including chicken and waffles inside a historic log cabin.