Photo Credit: Demonstrators hold signs reading "Black Pete is Rascism" and "Free Black Pete" during a demonstration against Zwarte Piet (Black Pete) in Amsterdam, on November 16, 2013. Zwarte Piet is the companion of Saint Nicolas during a yearly feast celebrated on the evening of 5 December. It was announced in October 2013 that the United Nations, under the authority of the High Commissioner for Human Rights, were to investigate whether Zwarte Piet is a racist stereotype. AFP PHOTO/ ANP BAS CZERWINSKI netherlands out (BAS CZERWINSKI/AFP/Getty Images)

What It Means To Be Black In Amsterdam

“I’m sorry, it’s been a long week,” she said. ‘The reason why I’m so tired is because I’ve been organizing these demonstrations for the past year of this traditional black facing.”

It’s during the months of November and December where Dutch people, like many other cultures around the world, are getting ready for Christmas. In the United States, Saint Nick is portrayed as a jolly, elderly white man with piercing blue eyes and a snow-white beard to match. In the U.S., Santa Clause is accompanied by reindeer and elves.

Across the Atlantic, in the Netherlands, Sinterklass is a tall, thin, elderly white man who rides a white horse instead of a sleigh and there are no elves. Instead, Sinterklass is joined by a group of Zwarte Pieten—translated in English to “Black Petes.” They help Sinterklass by carrying his bag of goodies and gifts to entertain children. The problem with Black Petes is that they are almost always played by white people dressed in blackface. They wear colorful costumes, paint their lips bright red, wear a curly black-haired wig, and big gold hoop earrings.

For Abreu, who serves as co-founder of the Black Archives, a group that documents the history of black emancipation movements and individuals in the Netherlands through activities and literature, Zwarte Piet is a painful reminder of institutionalized racism caused by colonialism.

“It’s not just colonial imagery or colonial language, this is racist,” she said.

According to Abreu, Black Pete, however is not dancing around to help Sinterklass in Amsterdam. “In general Amsterdam is progressive about Black Pete,” she stated. “When the movement came up, they stopped Black Petes in their parades so Amsterdam is not a reflection of the whole Netherlands. However, just because they solved the problem of Black Pete, it doesn’t mean they solved racism in the city.”

Amsterdam, the capital and the most populous city of the Kingdom of the Netherlands, has an estimated population of more than 800,000 people within the city’s limits. Data revealed that the racial and ethnic makeup of Amsterdam in 2012 was 49 percent Dutch and 50 percent foreign born.

Despite these numbers, Abreu said people in Amsterdam are quick to remind you that you are foreign born. “In the Netherlands, I’m not Dutch,” said Abreu. “I mean I am Dutch, only when it suits them. So, if you won the Olympics or you won a sport, then I am Dutch. If not, I’m just a migrant.”

Recently, two government-funded agencies decided to stop using the word allochtoon that is used to describe people with ‘alien’ origins, as reported in Dutch News. “Allochtoon means that you are not born on this ground and it was used pretty regularly,” Abreu stated. “It’s a code word for nonwhite but the paradox about that word is that I was born on this ground.” 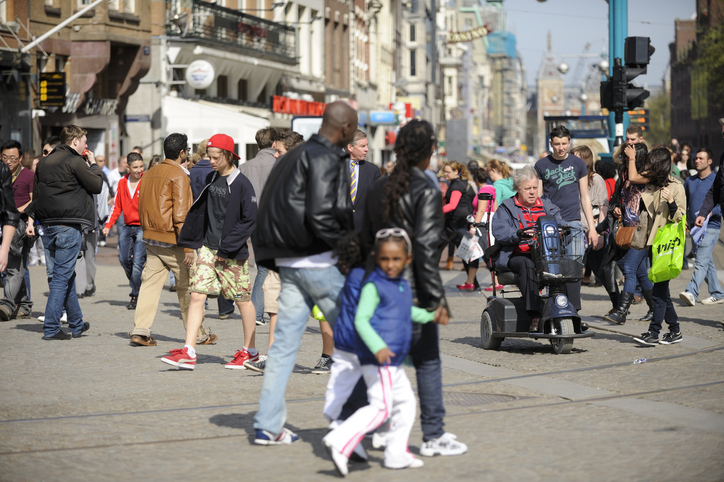 Abreu’s mother is from Suriname, a country in South America that was colonized by the Dutch until 1975. Like many countries in Europe with a colonial past, Abreu said the Dutch are not enthusiastic about talking about it. Not discussing issues surrounding race and culture is why she believes there is a lack of representation across the country and Amsterdam in particular, where positions of power do not reflect the demographics.

Mikayla Brown, an African American who recently moved to Amsterdam for her master’s degree, agreed. “As an American that grew up in a very Black area and spent my adulthood in a very Black area [of] New York City, I was in culture shock,” Brown stated. “For the first time in my life I actually feel like a minority. This is [also] the first time in my life that I’ve never seen Black people in positions of power.”

Brown, who is studying at the University of Amsterdam, said none of her professors at the school identify as black but she’s familiar with one professor in another department at the school who does.

When comparing Amsterdam to the United States, Brown said she finds Amsterdam to be an accepting place for black people. “I think navigating Amsterdam is easier because there is less room for discrimination,” she said. “[Both] the city and country have rules, strict rules, that apply to everyone.”

As far as entertainment, Brown said that the culture in Amsterdam is mixed and people hang out in the same places. “In the States, we have bars, clubs, lounges, restaurants that we go to that we know will be full of black people,” she said. “It is not like that here at all. I am not saying that it’s good or bad, it’s just very different.”

Brown attributes “exploring black culture” in Amsterdam to the Black Heritage Tour, hanging out at the Jamaica Lounge, and joining groups such as the Amsterdam Black Women Meetup and the Curly Girl Movement, started by a Surinamese woman. “Overall, my experience has been lovely,” she said. “I have issues obviously with the white university, which is my first time being exposed to this, but it’s not an issue exclusive to Amsterdam. I like Amsterdam. The healthcare is centralized and it’s a beautiful city that’s affordable.”

For Jessica de Abreu, who was born and raised in Amsterdam, she hopes the city’s affordability doesn’t come with the price of rejecting Blacks’ contributions and history throughout the region.