Traveler Story: I Quit My Job To Travel And My Life Will Never Be The Same

Ciara (@hey_ciara) shares how quitting her job to travel changed how she views the world, and herself.

I recently quit my corporate job to travel full-time. I was embarking on a 3-month solo trip throughout Central South America which would be my first long-term trip, my longest trip traveling solo, and the longest amount of time I’d spend outside of my hometown. I have now returned and to say it was an adventure would be an understatement.

Here are some things that happened on my trip:

I cried in my taxi on my first night because it finally hit me that I was about to embark on a such a new experience. I had no idea what to expect & my parents were freaking out about me traveling through Latin America alone. What if they were right? What if the worst did happen?

I returned to love in Tulum, Mexico after having previously experienced the town with an ex. I intentionally started my trip here so that I could create my OWN memories, without them being soured by the thought of someone/something that once was. And so I did. I took back Tulum.

I swam with sharks in the blue waters of Belize, but the captain on the boat offered us so much Caribbean rum that I hardly remember the experience. I guess that’s what pictures are for, right?

I camped and slept in a tent for the first time on a remote island in Belize. When I peeked from behind my tent at dawn to pink skies, I nearly cried.

I camped and slept in a tent for the second time on a volcano in Guatemala. We watched as the volcano erupted through the night right under the star-filled sky.

RELATED: The Advice Every Black Traveler Should Hear Before Going Abroad

If the 13,045 ft hike to the top wasn’t hard enough, I shed a tear once we got to the top, not because I’d FINALLY made it, but because I realized that I’d lost my phone on the way up. After feeling like I was going to die and my legs were going to give out, It was the tip of the iceberg. 1 month of photos GONE! Stupid, beautiful volcano.

As a result, I traveled for a month without a phone and everything was fine. I used like…real maps and stuff. Like, I didn’t die.

I camped for the 3rd time in the Peruvian Andes Mountains on a three-day, 18-mile (30 km) trek to Machu Picchu. 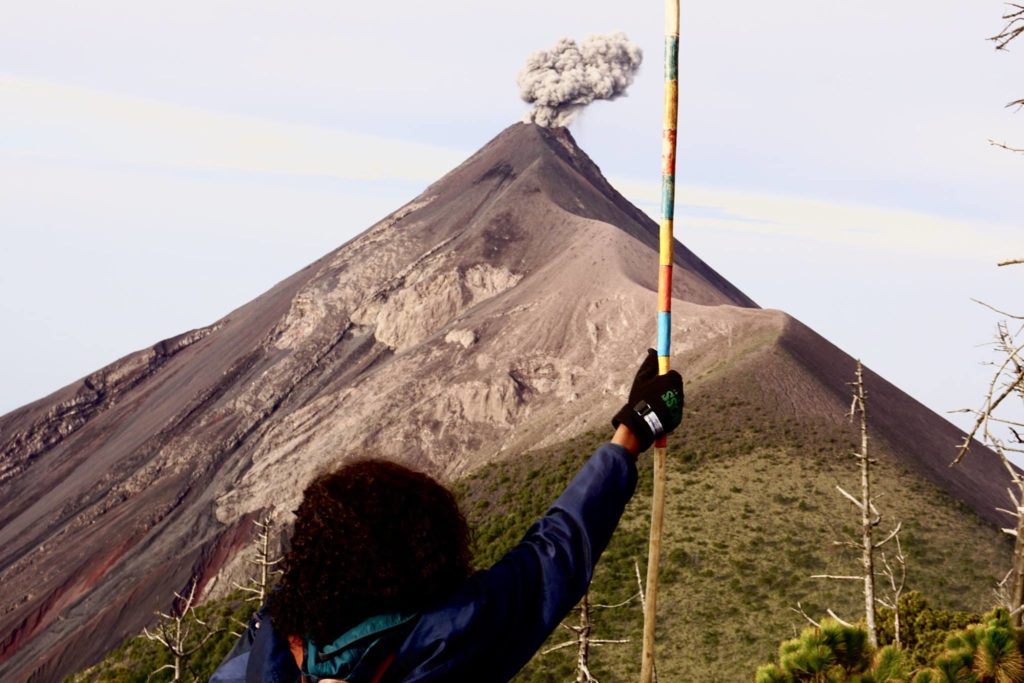 I couchsurfed alone for the first time and made a lifelong friend. I feared for my life on the first night but my host ended up showing me his life in Belize. He’d prepare meals, help with laundry, show me around town all out of the kindness of his heart. We even illegally crossed the border just to go to his favorite bar over in Guatemala. Sorry, mom.

I connected with people from all over the world, from Peru to Norway. White and brown, old and young, straight and gay, and it didn’t matter. It doesn’t matter. It’s amazing how quickly strangers can become friends. How you can share things with them that you haven’t shared with those you’ve known your entire life. How you can share intimate moments with them that you’ll never forget.

I lived with a Guatemalan family to help with my Spanish. Although things got REALLY awkward and we sometimes had to use Google Translate to communicate, mi Madre(Sylvia) never failed to make me feel at home when she’d call me down for breakfast before school each morning. Anytime I’d feel uncomfortable, I’d remind myself that I asked to be challenged. 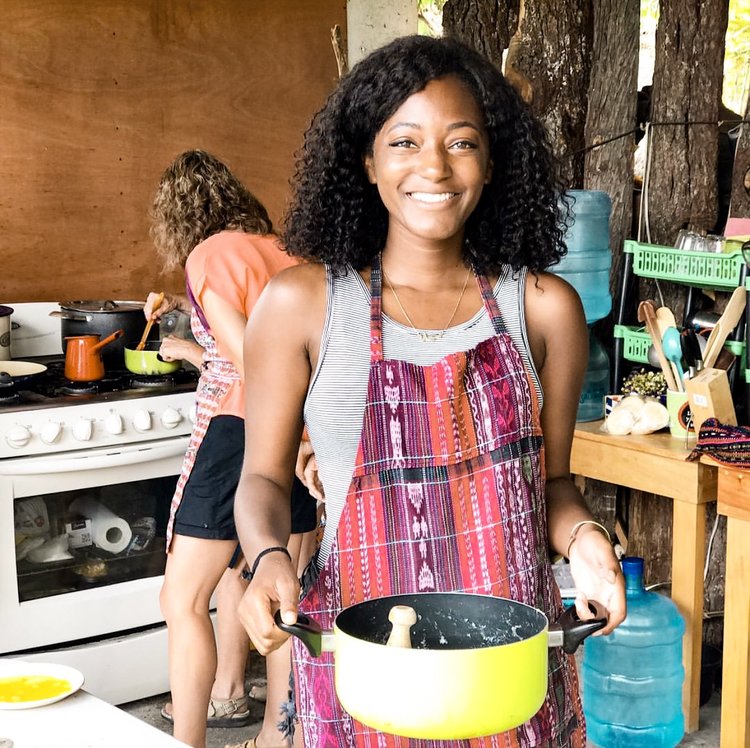 I took one-on-one Spanish classes in Antigua, Guatemala and it really helped push me closer to my goal of becoming fluent. Also, every interaction I had, in taxis, in markets, in restaurants, and with new amigos/friends, made more confident with the language.

I stayed at a wonderful place in Nicaragua called Maderas Village. I met the most inspiring people there. It seemed that everyone had also quit their jobs to travel and/or work on their own personal projects. We had conversations that I didn’t even know my heart needed.

The sweetest Isreali girl taught me how to surf the golden waves of Playa Maderas in Nicaragua. She spoke nearly five languages and she was such a bad*ss. Just a traveler who offered to show us to surf. I met so many awesome Israelis during my trip and although I never had a strong desire to visit before, I do now.

I ate alone in restaurants and sat in many coffee shops alone. It was always awkward at first, but I learned more and more each time that what others think of me is truly none of my business.

I met so many amazing women who are just killing it at life!

I volunteered on a sailboat for six days from Panama to Colombia. In exchange for cleaning dishes, preparing food, and sharing my experience with you all, I received a trip to the San Blas Islands at no cost.

Honestly, I was ready to get off that dang boat after six days. I didn’t know it then, but my soul needed the solitude and the sea. I woke up one day and decided to go paragliding in Medellin, Colombia and it was pure ecstasy. It was then that I decided fear wouldn’t stop me from doing anything in life.

I also got robbed at knifepoint in Medellin, Colombia. There are highs and there are lows.

While I need Google Maps to drive 20 minutes away in my hometown, I navigated foreign lands alone. While I thought I was shy and introverted, I made new friends on a daily basis. I surprised myself many times.

I learned that there are plenty of fish in the sea and they are waiting to meet you. Don’t trip over random guys or girls.

I fell in love many times, with the strangers that so quickly became friends, with every sunset I saw, with the chaotic markets I visited, and each new chance life presented me with when I arose each morning.

I thought I was confident before but this trip gave me more confidence than I’ve ever had.

And this is just the beginning. These experiences only describe a fraction of the experiences I had, but the internal changes that occurred as a result are endless and will last a lifetime. By interacting with and living with complete strangers on a daily basis, I shed my label of being ‘shy’. By navigating this world completely alone despite my reservations, I learned that I am capable of doing anything. By shedding labels given to me by myself and others, my true self was revealed to me. By being exposed to so many different people and ways of life, I rightly questioned my own beliefs and views about my life, myself, relationships, religion, and everything else I’ve been taught. By continuously stepping outside of my comfort zone, I learned that possibilities in life are endless. By exploring the corners of new lands, I was able to see that beauty can be found anywhere. By leaving behind those things that did not serve me, I learned that I have the power to control my own life. By taking a chance, I learned that things do always work out for you in the end. By meeting people all over the world, I learned that we are more alike than we’ll ever know. By listening to my heart and not letting fear win, I’m left with extraordinary memories that will last a lifetime.

When I met other travelers at the beginning of my trip, they’d often tell me I’d be a different person by the end of my trip. I doubted that. I already knew who I was. How much could change in a short three months? Well, they were right. This trip changed me in more ways than I’ll ever have the ability to express. I am a different person inside. I saw life and the people around me differently when I returned home. I still haven’t fully processed everything and it’s been several months since I left. I saw the world in such a raw, boundless way. No plans, no rules, no expectations and nobody telling you what to do. This created an unmatched level of personal freedom that so few people will ever get to experience and I will be forever grateful the experience.

The lessons I learned have continued to guide me. The conversations I had with strangers continue to echo in the back of my mind. I’m still on the road and I continue to gain new memories as my environment changes. I haven’t slowed down yet and I don’t plan to anytime soon.

Whatever it may be, if you’re dreaming of doing something similar, I urge you to start taking the steps now. If your heart is pulling you in a different direction than you’re headed, I beg of you to start inching closer. It might take months or years to get there, but baby steps will lead you there faster than being stagnant. Establish goals, write them down, say them out loud and start checking them off one-by-one. The time will pass anyway and one day you’ll look up to find yourself exactly where you hoped.

To learn more about my story, visit my blog at www.heyciara.com!