Do you support the Black expat movement, or is it colonizing? That’s the question we asked our Instagram followers after noticing increasing conversations within our community on this topic.

The concept is not new for Black people. Maya Angelou, Josephine Baker, James Baldwin, Barbara Chase-Ribaud, and Tina Turner are some of the most notable Black expats. Baker, Baldwin, and Chase-Ribaud’s reasons were tied directly to the treatment of Black people in the U.S. Turner, on the other hand, found success professionally and romantically in Europe.

And we can’t forget about the Black folks who also made the move before what is now considered a “movement.”

Many of them chose to relocate overseas for cheaper schools or decided to stay in a country after serving there in the military. The only thing that’s new is the exposure thanks to social media.

That recent exposure is how the term Blaxit was coined to describe the movement of Black people leaving their home country. The movement – whether it’s permanent or short-term ­– has been beautiful to witness. We love seeing our people going out in the world, moving abroad, and ultimately, going after the life they desire.

We’ve interviewed hundreds of Black expats over the last few years, and we know Black expats are not monolithic. They are all seeking different things, including a better work-life balance, fed up with racism, in search of better healthcare, and wanting to step out of their comfort zones.

As more people consider a Blaxit, we thought it was time to have an open and candid conversation about the Black expat movement versus colonizing.

It’s not an easy conversation to have – especially for the Black Americans who feel the U.S. is not quite home. Yet, many are in search of an identity not afforded to us because of slavery.

Moving abroad can be complicated. At some point in your journey, you may be wondering if you’re operating in the same way as colonizers as relocating could mean changing the dynamics for locals in the same way gentrification does to Black communities.

RELATED: The Black Expat: ‘Living In America I Wasn’t As Free As I Was Made To Believe’

Many commenters are here for the movement as long as respect is involved in the process. This means checking your mindset and leaving your old ways of thinking behind. 2. For Some People, It’s Complicated

Complicated was another common theme. Depending on where you’re relocating, your money may go farther, creating a new class of people that directly impacts locals. Current Black expats opened up about their experience after being accused of gentrifying the community.

According to the commenter, not everyone will agree with your move, but moving responsibly in an immersive and cooperative way is critical. 4. Are You Contributing To The Local Community

Leaving other countries for an “easier life” doesn’t sit well with some people. Contributing to the community should be on the top of the priority list. 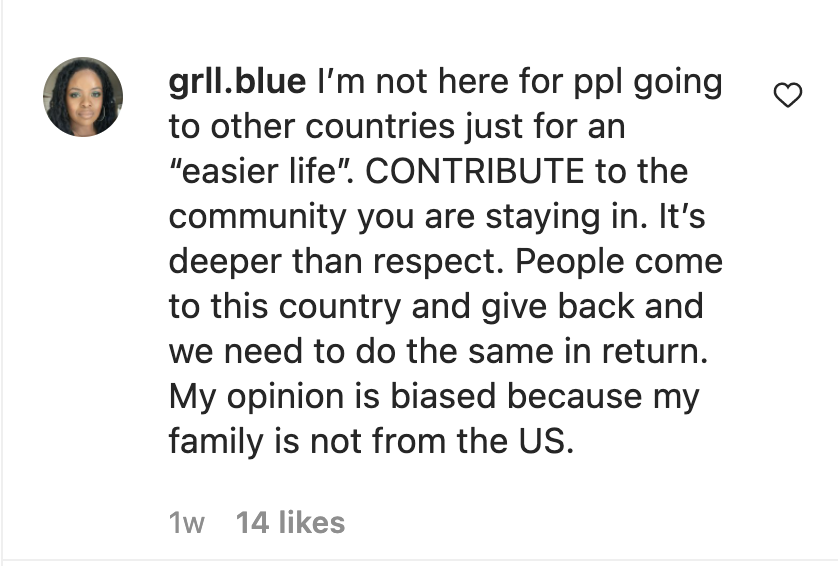 6. Go Where You're Treated Fairly

Many commenters support the Black expat movement, so Black people can choose to be in places where they are treated fairly. Others choose to call themselves global citizens rather than identifying as an expat altogether.