Notorious B.I.G. aka Biggie Smalls aka the unofficial King of New York left a permanent stamp on the culture, changing east coast hip-hop and the city of Brooklyn forever. And if you don’t know, now you know. On March 9, 1997,  the rapper was shot and killed in Los Angeles after leaving an album listening party.

Biggie’s legacy reverberates throughout the city of Brooklyn, up and down Fulton Street, where he grew up with his mother. After a slight stint in prison in 1989, the New York rapper signed with Sean Diddy Combs, shortly after as the first artist of Bad Boy Records. He went from rapping on a street corner to performing in front of thousands of people on stages around the world, earning him the Artist of the Year Award in 1995. With his gut-punching, complex lyrics, and powerful flow, Biggie told effortless stories about his life and struggles, connecting with many fans such as myself, through music.

On this 22nd anniversary of his death, take a tour with us of Notorious B.I.G.’s favorite food spots, his childhood home and the murals created in his honor.

Here is where the legendary rapper cut class and hung out with his friends while making a name for himself, as did his friends and hip-hop alums Jay-Z, DMX and Busta Rhymes. Biggie dropped out at 17 years old. “‘Cause G-E-D wasn’t B-I-G, I got P-A-I-D, that’s why my moms hate me. She was forced to kick me out, no doubt, he rapped on “Everyday Struggle.”

“Birthdays was the worst days” at Notorious B.I.G.’s childhood, where he lived with his mother as a child, in a “one-room shack,” as he describes it. Previously up for sale, the apartment has now been renovated to feature two more bedrooms, at a market value of $157,000 in 2017. 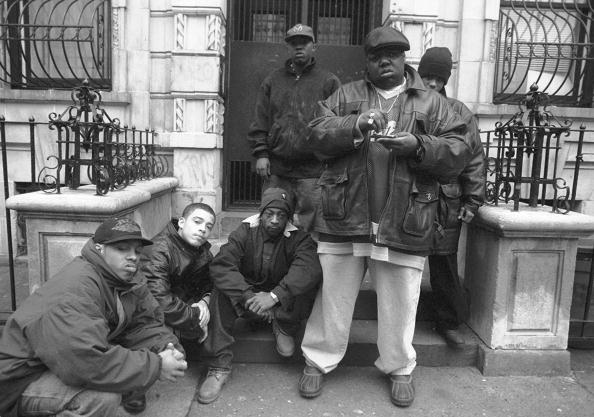 Notorious B.I.G. outside his home with members of his Junior Mafia crew. (Photo by Clarence Davis/Getty Images) 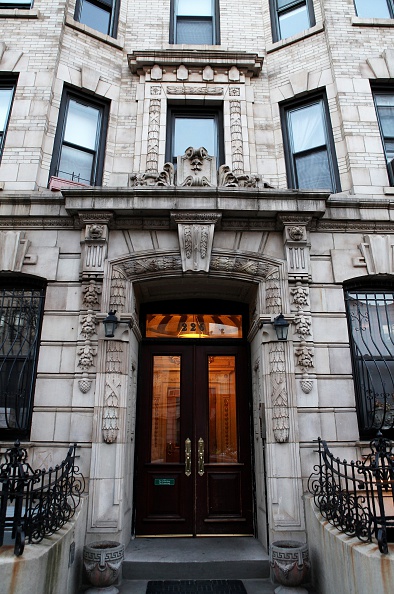 Stop by the underground club where Biggie rocked the mic, and Junior M.A.F.I.A performed their earliest freestyles. Since then, this space has been converted into a special-events venue. In honor of the late great rapper, the NYC Parks Department and City Councilmember Robert Cornegy held a ceremony for re-naming of the basketball courts at the Crispus Attucks Playground in Clinton Hill. The ceremony also revealed the parks 2.5 million dollar renovation, including new equipment, more accessible entry points, and a garden. Biggie worked at Key Foods when it was called Met Food Supermarket, asking to bag groceries. On the 20th anniversary of his death, Brooklyn residents and dedicated B.I.G. fans, Jed Heuer and his wife Jennifer wanted to preserve his legacy, creating limited edition grocery bags with his face on a first-come, first served basis. Stop in today and maybe the bags will resurface. On “Big Poppa,” the rapper talks filling up his belly with a “T-bone steak, cheese eggs and Welch’s grape” juice. He must have been talking about this home-style Country House Diner he often visited just minutes away from his house. It gets no bigger than the King of New York. Be sure to take a selfie or picture with the 38-foot mural of the late rapper by artists, Scott “Zimer” Zimmerman, and Naoufal “Rocko” Alaoui. The lyrics are from Biggie’s rare first-ever demo tape, “Microphone Murderer.” The city of Brooklyn came together to save the mural after owners almost destroyed it in 2017. 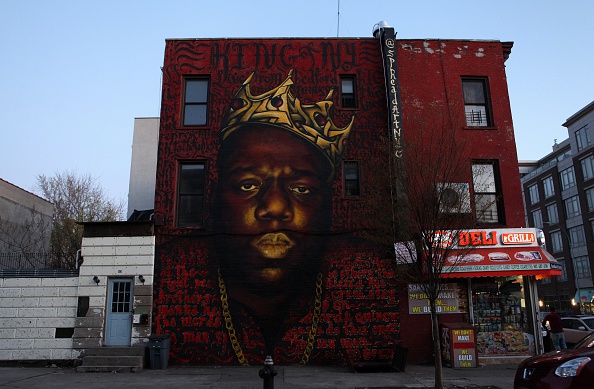 Another masterpiece keeping Biggie’s legacy alive is this awe-inspiring sculpture of his head by Brooklyn artist Tanda Francis. The sculpture was revealed in 2017 in The Charles Evans Innis Memorial Library at Medgar Evers College and is still on display. His mother Violetta Wallace loved this painting by art curator Sacsix, as part of his #SidewalksAndIcons series, featuring other icons such as President Obama, Oprah Winfrey, Michael Jackson and more. Purchase a copy of the painting and others here. 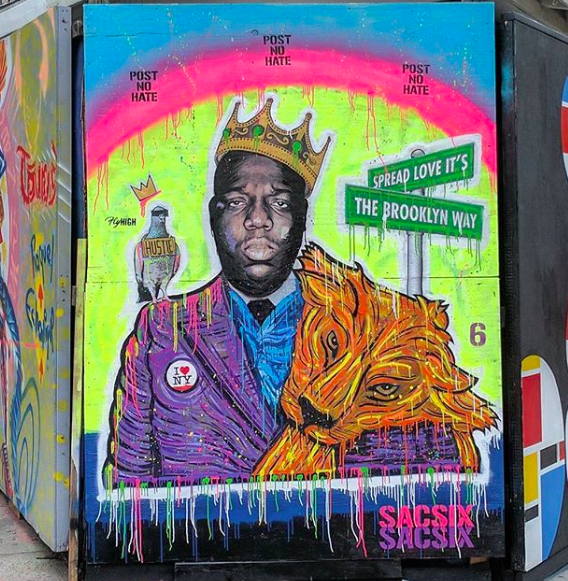 Habana To Go, a local Mexican joint commissioned the collaboration of portrait on the side of the building. Local artist Cern One, restaurant’s designer John Garcia, and Lee Quiñones collaborated on this large mural titled “!Comandante Biggie!”, meaning commander. 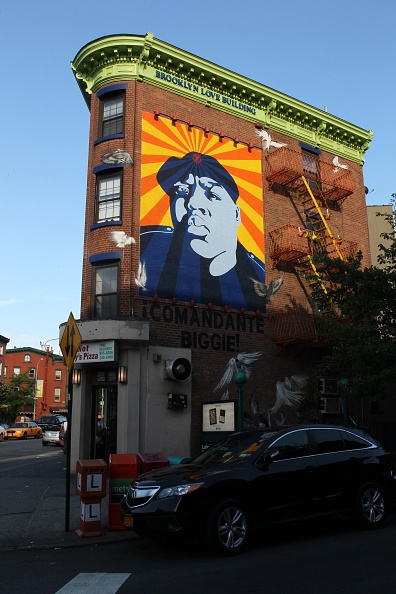 A mural of The Notorious B.I.G. by artist Cern One |Getty Images