Thanks to the Carter’s “Apesh*t” videos, the world’s most visited museum had over 10 million people in 2018.

This figure marks a new record for the Louvre Museum, higher than New York’s Metropolitan Museum of Art. “Apesh*t” is the lead single from the Carter’s joint album Everything is Love. The video has almost 150 million views and featured some of the most distinguished pieces of art spanning back 300 years, such as Leonardo da Vinci’s Mona Lisa painting, Marie-Guillemine Benoist’s Portrait of a Negress and Rosso Fiorentino’s Pietà from the 1500s.  The museum also designed a visitor tour based on the artists and each artwork in the video, after it was released. Museum director Jean-Luc Martin called it a remarkable year for the museum’s worldwide reputation. “The Beyoncé video, like the opening of the Louvre museum in Abu Dhabi, ensured that the Louvre was talked about across the world, and one of the consequences of that is the spectacular rise in visitor numbers last year,” he said.

Beyonce and JAY-Z have been intentional about infusing cultural arts and history into their music, using their art as a “therapy session.”  The video was seen as a marker on the race and power in art. Most of the pieces shown projected race, power, colonialism and the concept of female beauty and strength. Beyonce performed alongside seven other black women in a linked together showcasing strength in front of the Crowning of the Empress Joséphine in Notre-Dame Cathedral by Jacques-Louis David.

Napoleon crowned himself and his wife Josephine as Emperor and Empress. His reign was built on the exploitation of Black and indigenous bodies. Beyonce connected with the painting and Josephine, also being of Creole heritage. 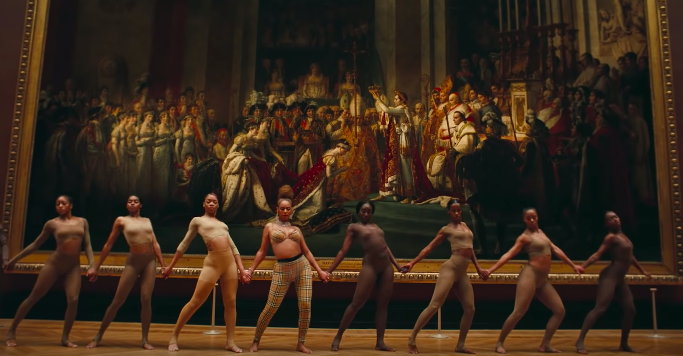 The growth of visitors also earned the museum an upgrade to their ticket office, due to sales and separate funding. Hoping to attract even more visitors, the Louvre Museum will feature free nighttime visits every first Saturday this year.