Attention: Black People Are Not Your Travel Photo Props

Everyone doesn’t have an eye for photography. It takes creativity, time and the ability to be bold. In today’s society, sometimes you need to be careful with just how bold you should be.

One photographer is feeling the heat after he thought it was a great idea to capture a white woman dressed in beautiful dresses in the middle of a village in Cameroon. In the photos, Awamu Moja, the photographer from Luxembourg, posed a model standing among residents of the African country, posing in different outfits, one being a wedding dress. In two of the pictures, she is even holding a child for some reason, surrounded by Baka people, who are hunter-gathers.

The photos first made an appearance on Instagram back in September but gained notoriety on Tuesday after photojournalist Chirag Wakaskar reposted them, accusing the photographer of “white savior bull.” 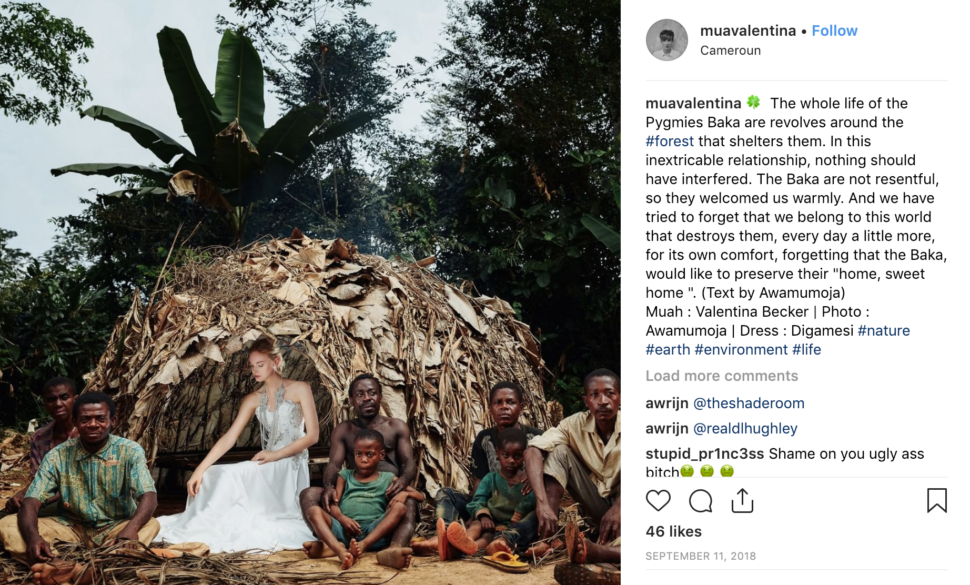 The makeup artist of the shoot, Valentina Becker, posted the images explaining the vision behind the pictures, using the hashtag #deforestation and the consequences it will have in the future. The description for the behind-the-scenes YouTube video gave a different reason.

“Photographing a model in a grand prix dress in the midst of Baka pygmies dressed in rags is a provocation. The price of the dress would be enough to bring, in this end of the end of the world, what to live worthily, the description reads. “For the Baka still live as at the dawn of humanity; hunter-gatherers, semi-nomadic, who lack all that civilization could bring them. Schools to learn, health clinics, trucks full of essentials for life. What to open to the world.”

It’s clear that some photographers just don’t get it.