9 Of The Tallest Mosques Around The World

With nearly 3.6 million mosques around the world, the interior majesty and architectural detail of these buildings makes them worth a visit on your next international exploration. Check out this list of nine of the tallest and most beautiful mosques in the world.

Built in 1656 A.D. by the same emperor who built the Taj Mahal, the Jama Masjid in India is a true wonder. One of the oldest buildings in the country, this mosque has a historic legacy to match its stunning exterior and interior.

Also known as the Jama Masjid of Delhi, this mosque is a high-capacity structure with a courtyard that can hold up to 25,000 worshippers. The Jama Masjid stands 41 meters tall.

A radiant beauty with ancient Iznik tiles, the Aqsunqur Mosque in Cairo is a reminder of Ottoman history and architecture. Named after its creator, whose remains lie within the mosque, it was built in the 14th century over the tombs of the people of Cairo. It is filled with white and green marble doors, exquisite archways, and beautiful tiles. 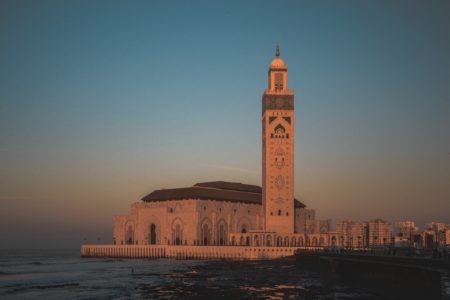 At full capacity, the Hassan II Mosque in Casablanca, Morocco can hold 105,000 worshippers. It was designed by French architect Michel Pinseu and is the fifth-biggest mosque in the world, standing 690 feet tall. The Hassan II Mosque is unique because it gives its worshippers an incredible view of the Atlantic Ocean as they pray. It ranks as the tallest mosque in the world. Named in honor of Malaysia’s first Prime Minister, the Putrajaya Mosque is a rose-colored sight that from afar appears to float on water. A popular design for mosques, this building is built partially on land and the rest, on a man-made lake. It is over 350 feet tall.

With symbolic Islamic structural influences throughout the building, this mosque has a classic feel while still incorporating modern features.

Covering 54,000 square feet and standing 295 feet tall, the Faisal Mosque in Pakistan was built in 1976 by the late King Faisal bin Abdul-Aziz. The king spent $120 million of his fortune building the mosque which, with its modern design, is an architectural wonder meshing generations of Islamic culture and influence.

The fourth-largest mosque in the world, the Faisal Mosque has been compared to a giant spaceship with its edgy and sharp design elements, tent-like shape, and 300,000 worshiper capacity. Visible from the Istanbul skyline at 141 feet tall, the Blue Mosque is a marvel worth visiting if you ever find yourself in the city. Built by Ottoman ruler Ahmed I in the 17th century, the mosque features six minarets thrusting into the sky like needles, and massive dome-like rooftops. Inside the mosque, its central dome is covered in more than 20,000 Iznik tiles, and flowers and trees surround the building.

The eighth-largest mosque in the world, Sheikh Zayed Mosque stands tall and white as sand in Abu Dhabi, United Arab Emirates. The structure is named after the founder and first president of the country, Sheikh Zayed bin Sultan Al Nahyan and the great leader is buried within the mosque. Built in 2007, the mosque is amongst one of the newest and largest Muslim architectural wonders in the world today.

A 377-foot-tall symbol of pride, the Ubudiah Mosque is considered the most beautiful place of worship in Malaysia. The mosque features four minarets and an illustrious golden dome designed by British architect Arthur Benison Huback.

Built by Sultan Idris Mushidul Azam Shah, the mosque was created as a gift of thanks after he recovered from a terrible illness. The mosque attracts thousands of worshippers each year seeking to bask in its beauty and holy ambiance.

Standing tall above the bazaars in one of the oldest parts of Colombo, Sri Lanka, the Al Alfar Mosque, or the Red Mosque, is a true wonder of the world. With domes shaped like pomegranates instead of the traditional onion shape, this mosque served as a landmark for sailors arriving in Sri Lanka beginning in 1908.

The Red Mosque’s towering minarets and red and white swirling pattern can be seen for miles around Colombo and was built in the Indo-Saracenic style of architecture.

Related: 10 Of The World’s Most Beautiful Mosques