8 Of The Most Influential Black Women In Colombia's History

According to the Colombia national census conducted in 2018, roughly 3 million people self-identified as Black. Afro-Colombian organizations disagree with the census’ methodology, saying that the number could be up to three times higher, with descendants of Africans making up anywhere from 15% to 20% of the population. Despite the controversial census, one thing is clear: Afro-Colombians play a very important role in Colombia’s history.

From music to gastronomy, and other social aspects, they helped to build the country, although Black people in Colombia have suffered with neglect and racism throughout the country’s history.

To celebrate the contributions of Black people to Colombia’s history, Radio Nacional de Colombia (Colombia’s National Radio Broadcast) recently compiled a list of the eight most influential Afro-Colombian women. The list includes artists, writers, athletes, scholars, lawyers, and an activist who is considered as one of the 100 most inspiring and influential women in the world.

“These Afro-Colombian women inspire and ennoble Colombia, and have marked its history from their areas of influence,” said the RNC on its website.

Meet the 8 most influential Black women who have made remarkable contributions to Colombia’s history.

Born in Lorica, Córdoba, in 1926, ‘Yeya’ as her friends called her, was a front-runner in several fields. Artist, researcher, and teacher, she defended the importance of Black culture from the Pacific and Atlantic coast of Colombia.

She studied plastic arts at Colombia’s National University, while taking dance classes. Years later, she taught at the same institution and at the Central University, and founded the dance company ‘Ballet Folklórico Delia Zapata Olivella’, perfoming Afro-Colombian traditional dances that inspired her.

Her research on traditional culture and dance in the country made her a pioneer, reflecting plans and choreographic drawings on a stage, which allowed dancers to take Colombian culture to all corners.

During a trip to the Ivory Coast, to study the African roots of Colombian culture, she contracted Malaria, which caused her death at the age of 75. 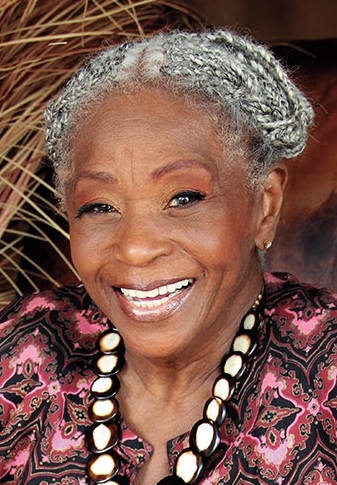 At the age of 18, she began her artistic life as a dancer in the ‘Delia Zapata Ballet’, which she performed in many European countries. She was the first Afro-descendant woman to be on an album cover.

She was elected in 1998 as a representative to the Chamber for Bogotá, with the Liberal party, and again in 2006 with the Analdic movement.  In 2016, Colombia’s Ministry of Culture awarded her the National Life and Work Award in 2016. Currently, she is dedicated to carrying out social work in her hometown.

Born in 1982 in the Yolombó village, Francia Márquez is a human rights and environmental activist. In 2018, she was awarded the Goldman Prize, awarded for her defense of nature and environment.

She achieved international recognition for  fighting against illegal mining and the diversion of the Ovejas River, which implied environmental and social impacts on their community.

In 2019, BBC listed her as one of the 100 most inspiring and influential women in the world. Because of her activism, she has received death threats and has even suffered attacks.

Born in 1954 in Darién, Valle del Cauca, Hinestroza had a very difficult childhood. Against all odds, she graduated in Mathematics at the Universidad del Valle, where she was awarded a scholarship for her performance.

However, before graduating she was invited to  be a professor at the institution, and remained so for 40 years.

In 1986, she was the first Afro-Colombian woman to get a Master’s degree in Mathematics. She earned a doctorate degree in Applied Mathematics at the University of Cincinnati – USA.

To fight against racism and sexism, Hinestroza founded the Doris Hinestroza Foundation, to help needy students.

Maria Teresa Gómez Arteaga (also kown as Teresita Gomez), is one of Colombia’s musical greats. She is one of the most  influential pianist and music educators in the Colombian music scene.

She began her piano training at the age of 4 at the Institute of Fine Arts of Medellín, where she gave her first solo concert at 10 years old.

Despite being recognized as one of the best pianists in the world, she has always faced discrimination due to her skin color.

In 2005, the government of Colombia granted her the Cross of Orden de Boyacá in the degree of Comendador for her artistic career, and contribution to the musical culture and honorable representation of Colombia abroad.

In 2017, the Antioquia Governor awarded Juan del Corral in the gold category, for her musical contributions over 60 years as a professional pianist. Currently, she is a piano professor at the University of Antioquia, in addition to performing as a soloist in concerts around the world.

Teresa Martínez de Varela was born in Quibdó in 1913. She was one of the first Afro-Colombian women to publish books in her country.

Known as ‘Lisa de Andráfueda’,  she is a versatile writer, a poet, a novelist, musicologist, playwright, activist and researcher.

She died in 1998 without receiving a fair recognition in Colombia.

Today, she is considered the pioneer of the incorporation of the African identity within Colombia’s literary scene, and as one of the most important intellectuals of her time.

In 2009, her biographer Ursula Mena Lozano published “In honor of the truth”, in recognition of her work.

Born in Condoto, Chocó, Lozano earned her Law degree at the Santiago de Cali University in 1966. She specializes in Family Law and Criminal Law.

Before becoming a lawyer, she represented Chocó in the National Beauty Reign in 1957, when she was considered one of the most beautiful women in the contest.

She was the first Afro-Colombian woman to be a congresswoman in 1962 and Vice Minister of Justice in 1982, during Belisario Betancourt administration. In addition, she was the Presidential Counselor for Equality for Women, and a former Judge of the Superior Court of Justice.

She currently lives in Cali.

María Isabel Urrutia Ocoró (born 25 March 1965) is a former weightlifter, athlete and politician from Colombia. She won the first ever gold medal for Colombia at the Summer Olympic Games in 2000.

After winning the gold medal at the 2000 Sydney Olympic Games, she ventured into politics as a House Representative, where she was the author of several bills from 2002 to 2010, promoting the professionalization of athletes, while fighting against racial discrimination.