There are many reasons to find yourself in the European epicenter at the conclusion of the summer; maybe you have an extended layover in London on your way to the coast of Croatia. Perhaps you are flying into Heathrow to catch a quick train to Amsterdam, or perchance like me, you were twiddling your thumbs at your local coffee shop, got an instant familiar itch to travel, scoured the web for deals, and scored a dirt cheap flight that departs on Friday… did I mention it’s Tuesday?

Upon landing at London Heathrow and briskly walking through immigration, I was able to purchase a round-trip ticket on the Heathrow Express train from an attendant standing just outside the exit with a hand held transaction device. It was as if he was there precisely for me and my needs alone. I was immediately impressed by the underrated simplicity of organization that the city offered. The Heathrow Express was 34 pounds round-trip and within 20 minutes you are in London proper. After arriving at Paddington Station, I promptly turned on my data roaming and allowed Siri to guide me on a scenic walk through Hyde Park that is positioned directly in front of my hotel.

I was able to snag a room at the historic Grosvenor House hotel, which is situated in the popular West End area. Being centrally located on a quickie trip is vital and will save you time when you are attempting to indulge in every sight the city has to offer. I arrived before noon and was kindly given a key to my adorned suite, which allowed me time to take a power nap before I began my incomprehensibly, spontaneous adventure. 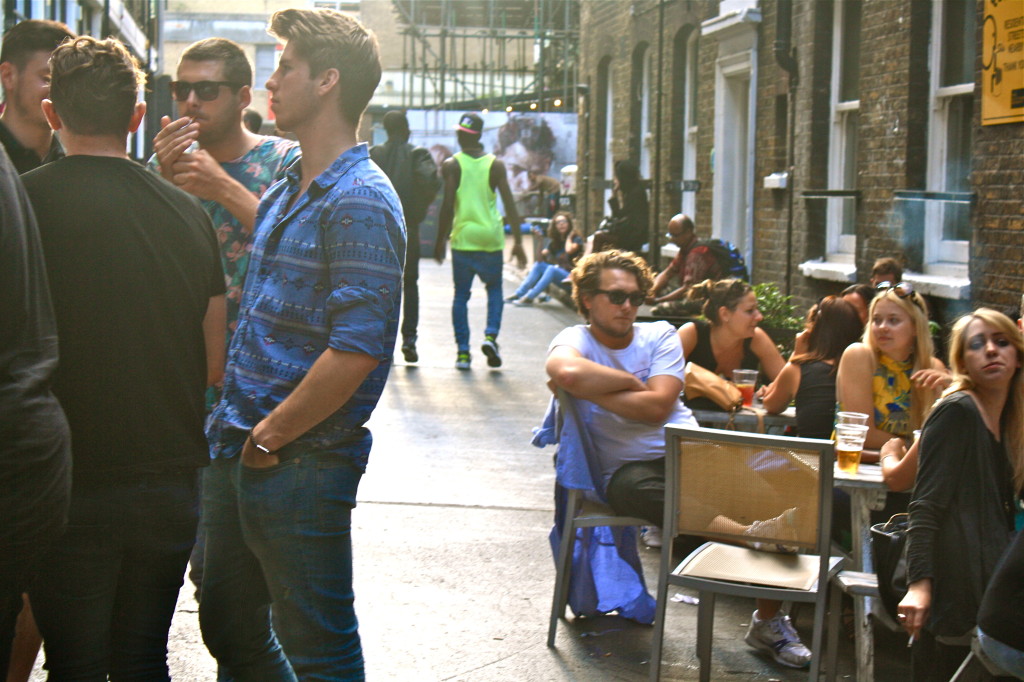 I arose hungry and couldn’t decide exactly what I wanted to indulge in, so I opted for everything. I headed over to Borough Market via the tube London bridge exit. Borough Market is a renowned international food and produce trader that boasts hundred of vendors selling cuisines from all over the world. I was able to munch on Argentinean empanadas, authentic Spanish paella, Caribbean soul food, Greek olives and Ethiopian ingera, all under one incredibly large tent. 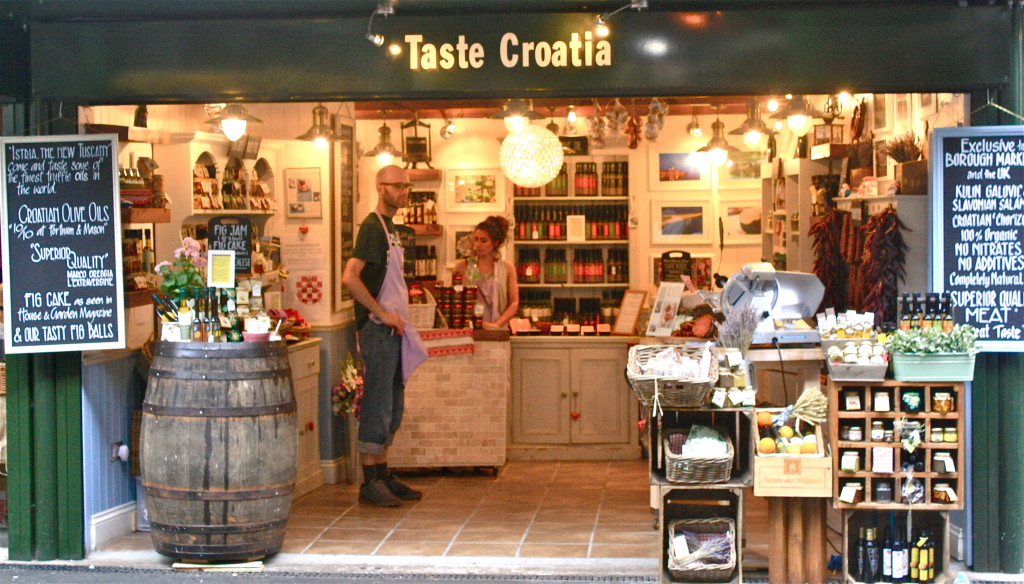 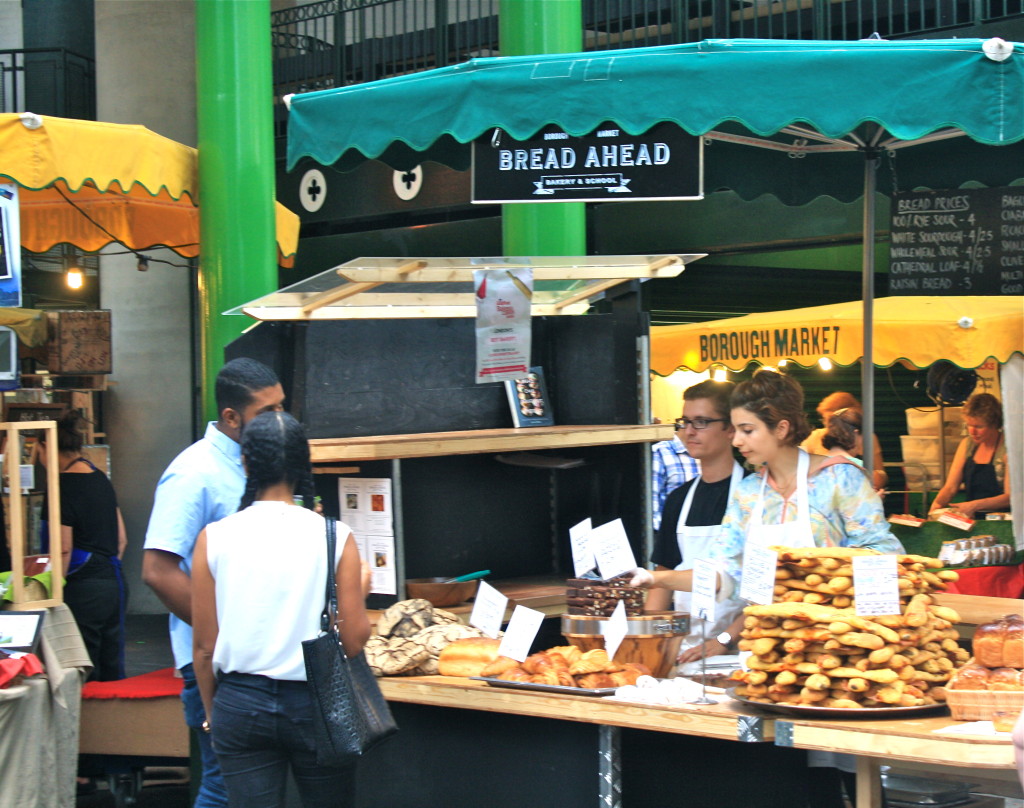 After people watching and observing the Londoners in their natural habitat at the market, I headed over to the National Portrait Gallery Museum to view some still life. The museum is free to enter and to my surprise offered many American inspired exhibits showing portraits of everyone from Johnny Depp to Robert E. Lee. The portraits were an evolutionary walk through time, and offered the chance to put a face on the historically prominent figures that we wouldn’t recognize as easily as the public figures we know today.

Next I head over to Shoreditch and instantly fall in love. Shoreditch is the perfect mix of culture and cool, with mural filled walls and friendly hipsters that quickly tucked me under their wings and on a voyage through numerous bars in the area. The locals in this neighborhood are artists and trendsetters, that serve as the pulse of the city’s youth. I was taken on a journey of vintage eats met with fashionably organic cuisine and cocktails.

All of the establishments and food trucks offered airy dining areas paired with mixed genre DJs. Before I realized it the sun had set and time had disappeared as quickly as my third pint of cider. Most of my time was spent dancing and toasting with locals on the patio at the Big Chill bar located on a secluded narrow brick road. Outside of the posh accents, I would have thought that I was back home in Williamsburg, Brooklyn saluting to the weekend. The best thing about traveling alone is the number of new friends you will meet along your journey. A group of locals adopted me (despite being American) and took me to The Eagle, the original gastropub on the ever-busy Farringdon road. I’m not sure if I was more impressed with the food, or the unique layout of the establishment. Set in a triangular format, the room had no particular décor, but the mixed-matched tables, chairs and plates, felt like they were used in a former London life.

We ordered our reasonably priced food at the bar that fronts an open-galley kitchen, and it was delivered to our table. As we shared tastes of every order around the table, nothing was a disappointment, and my fish and chips were superbly executed. Needless to say, we all indulged in an array of European crafted drafts by the pint.

The only way to end a Saturday night abroad is with dancing. My newfound comrades and I drove over to the Clapham, located in South London and nestled right into the middle of the dance floor at Aquum nightclub. The vibe of sophistication and pop make for the perfect equation needed for a fun filled nightcap.

After climbing out from under what seems like a sea of pillows, I make my way down to the book room for a spot of tea while I map out my day. I hop on the tube and decide I want to see all of London in less than 30 minutes. The only way that this is physically possible is to take a ride on the London Eye. This is a must see for a quickie trip because it satisfies your adrenaline rush and your desire to see Buckingham Palace. It’s important to arrive early before the rush, or you can simply purchase tickets ahead of time online.

After my stomach settled from the elevation of the ride, I make my way over to one of the city’s oldest pubs, The Spaniard’s Inn. If you are a fan of Dickens, you may remember him referring to this romantic haven in his work The Pickwick papers. What I adored more than the Scotch eggs that I consumed was the charming country escape that this restaurant offered in the middle of the bustling city. The beer garden is ornamented in delicately growing vines that hug the stucco walls of this darling villa. As I sit and admire, while enjoying local ale, I can’t help but imagine the great writers, such as Keats, that sat in my very seat, and wrote their way into the minds of readers all over the world. A few lads around the city encouraged me to visit an annual Jamaican street festival that happened to be taking place while I was in town, called Brixton Splash. Brixton is a predominantly Jamaican populated district in South London that is being rapidly gentrified. In an effort to retain the cultural essence, Brixton Splash was created in 2006. I was able to see locals in their most vulnerable artistic forms, reciting poetry, monologues and performing original music. Brixton Splash hosts hundreds of traders, crafters and most importantly, authentic Jamaican cuisine.

In an effort to stimulate the economy during the late 1940’s England sailed the Empire Wind Rush to the West Indies to promote mass migration that allowed over 500 West Indian natives to become citizens. This explains the large Jamaican population in greater London and especially why the jerk chicken was spiced to perfection. I danced and shopped, and danced and ate, and danced again. There were different DJ’s on every corner playing different tunes on the overcrowded roads of Brixton. The levels of excitement that take place when you stumble upon an unexpected street festival, is euphoric. I retreated back to my hotel to rest my feet before I decided to take one last evening stroll through Trifalgor Square, around to Leicester Square, and over the River Thames via Westminster Bridge. If you are as lucky, you will find a beautiful local to accompany you on your walk. This enchanted city is most beautiful when viewed beneath the moon’s opulence.

Dance freely, eat fish & chips and wander aimlessly. This, my friends, is how you conquer LondonTown 48 hours. This story was curated by Sasha Bonet.