3 Museums to Visit in Madrid

Spain is known for its unique culture practices: from the midday siesta to tapas and the never-ending nightlife. How the Spanish engage in these cultural practices varies by region. For instance, siesta is more common in smaller cities, and the Spanish language becomes harder to decipher due to the prevalent lisp in southern areas of the country. But where does this leave Madrid, the city that lies in the middle of Spain?

Standing in Puerta del Sol, the dead center of Spain, one can see how many different people the city attracts at any time of the year. It is important to the Spanish that Madrid’s visitors experience the many different aspects of Spanish culture. One of the ways in which the city does this is through art. The list of museums in Madrid is anything but short, which is why this post will give you an inside look on the three best: the Prado, the Reina-Sofia and the Thyssen-Bornemisza.

If you ask any resident of Madrileño what to do on a visit to their city, there is almost a guarantee they will tell you to visit the Prado. The Prado is massive and gives a rich depiction of Spanish culture and values through art. One could easily spend hours roaming the halls of the museum gazing at paintings and sculptures from some of the world’s most renowned artists including Goya and Velázquez.

My favorite part about this museum was seeing paintings that I had studied in my Spanish classes like Las Meninas by Velázquez.

The Prado may seem overwhelming at first, with long lines wrapping around the entrance and a seemingly never-ending set of hallways lined with paintings. No matter your initial thoughts on the museum, it’s worth a visit. Each piece of art illustrates powerful images of religion and history.

Students enter free of charge, and no admission charges are offered during certain hours in the summer to encourage visitors to stay out of the heat. This by far is one of my favorite museums. The Reina Sofía’s modern art collection, as well as their seasonal displays can capture any visitors’ attention. I was fortunate enough to visit during one of the largest Salvador Dalí exhibits, which gave me a look into his crazy world. Although Dalí was a native of Spain, it was the first time 30 of his paintings were shown in the country. Of course the exhibit would not be complete without his most notable painting, The Persistence of Memory, which was on loan from New York’s Museum of Modern Art.

Seasonal exhibits highlight the types of phenomenal modern art the Reina Sofia brings into Madrid, however, its permanent collection is nothing short of great. Paintings from Spain’s best modern artists such as Miró and Picasso have their artwork on display here. Many travelers will tell you seeing the Mona Lisa in the flesh is anticlimactic. Well, seeing Picasso’s Guernica in the flesh is the exact opposite. You enter a room in the museum and there lies Picasso’s huge historic painting. No pictures are allowed in this room, I’ll say it again: No Pictures Allowed (I got in trouble for this). I kind of see the Thyssen-Bornemisza as a mixture of the Prado and the Reina Sofia in terms of atmosphere. It was casual enough for a friend and I to swing by after work one day, however, after only a half an hour in the museum, we realized the quantity and quality of the work that was on display in its 18 rooms. It boasts one of the largest private collections in Europe.

Unlike the other two listed, the Thyssen-Bornemisza features a range of international art over several centuries. In addition to the Spanish painters that you will see lining the halls of the Prado and the Reina Sofia, the Thyssen-Bornemisza boasts a roster including Claude Monet, Vincent van Gogh, and Jackson Pollock. The combination of artists who originate from both Spain and around the world, make this museum a must see.

For those balling on a budget like I was, the Thyssen-Bornemisza’s permanent collection is free on Mondays. 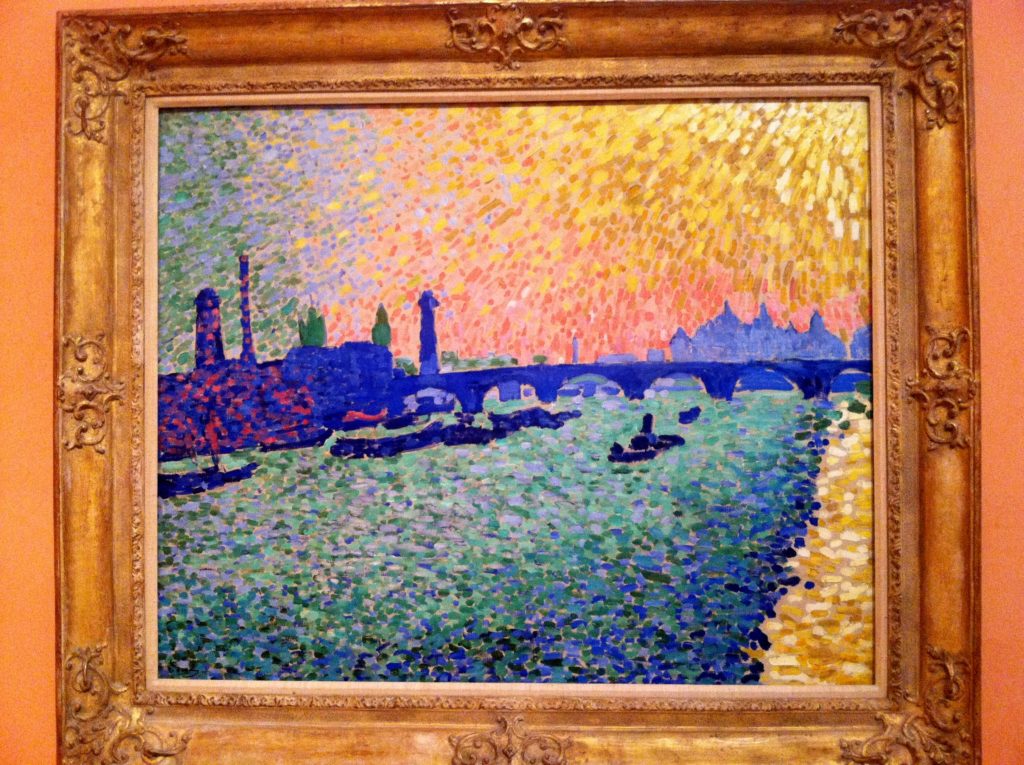 I will end by telling you that this review was by someone who is believed to receive most of her background knowledge gained elementary school art. After visiting these museums, I gained a firmer grasp on both art history and Spanish culture.