The Road Less Traveled: A Day in Luxembourg City

“Where are you headed next?”

“Oh cool…silly question, where is that again? Switzerland?”

“No, but close, there’s a “Little Switzerland” in Luxembourg!”

“Wait, I thought Luxembourg was a capital city in another country?”

“Yeah, Luxembourg City IS the capital of Luxembourg!”

“Oh jeez, get out of here before you drive me nuts!”

Typical conversations that surrounded my recent trip to Luxembourg always seemed to either begin and end in a cloud of confusion as to where Luxembourg is, or garner disbelief as to how I spent an entire weekend there without electing to hop over to popular neighboring cities like Brussels, Paris and Cologne. However, during my summer in London, I decided to zip over and find out what the local sensibility of this city full of drifters is, with 60% of its population being expats and having 170,000 people commute back and forth each day. Outside of having well-paid jobs particularly in the EU and financial sectors, what is the draw to life in Luxembourg City? Upon arrival, I quickly discovered how charming and quirky this metropolis with a small town feel actually is, despite locals jokingly asking with perfect deadpan deliveries, why a New Yorker would elect to visit Luxembourg! For starters, Luxembourg puts the “lux” in luxury, in every sense of the word. It’s got modern architecture juxtaposed with grand medieval ruins squaring up its skyline. There are fairy tale cascades of sprawling green patches peaking throughout every corner of its tiny parameter. An ease of various languages rhythmically rolling off the tongues of its multicultural & multilingual residents who at a minimum speak three languages interchangeably between Luxembourgish, German and French, with most actually speaking up to four when equating English in the mix. Add a sprinkle of posh shops, eccentric art galleries, day trip escapes to vineyards and lush nature trails and you’ll sum up a few reasons why there is an unexpected air of familiarity for anyone who happens to stumble across Lux. Curious? Let’s ditch the business suits and head for a leisurely Saturday stroll around town showing just how down-to-earth and accessible life in Lux can be! Every Saturday (and Wednesday) in Place Guillaume II, there’s a small outdoor market filled with fresh produce, flowers, food carts and lots of locals milling around for deals and yummy samples. The market opens up around 7 AM and closes at 2 PM and its vibe reminded me of the “c’est la vie” attitude of Parisian outdoor markets, albeit with ample rounds of friendliness and smiles. It was also a great entry into observing how locals live on an everyday basis. Across the way in Place d’Armes, there’s a flea market every second and fourth Saturday from 8 AM to 6 PM, along with street performers and musicians providing entertainment in this cafe-lined square. Case in point, later in the day, I randomly ran into a very stylish children’s marching band performing on their way towards the square. Walking through the steep, winding paths of the Old City of Luxembourg is a picturesque introduction to the deep and complex roots of its history. If you’re a fan of dramatic, episodic tales of monarchies ruled by counts, dukes, grand dukes and [insert royal power of choice], in what was once known as the largest fortress of Modern Europe, you’re in for a historic treat! Must-Do while in the Old City: Explore the underground galleries of the Bock Casemates, which is a network of fortifications from the 18th century and a present-day UNESCO site welcoming over 10,000 visitors a year. 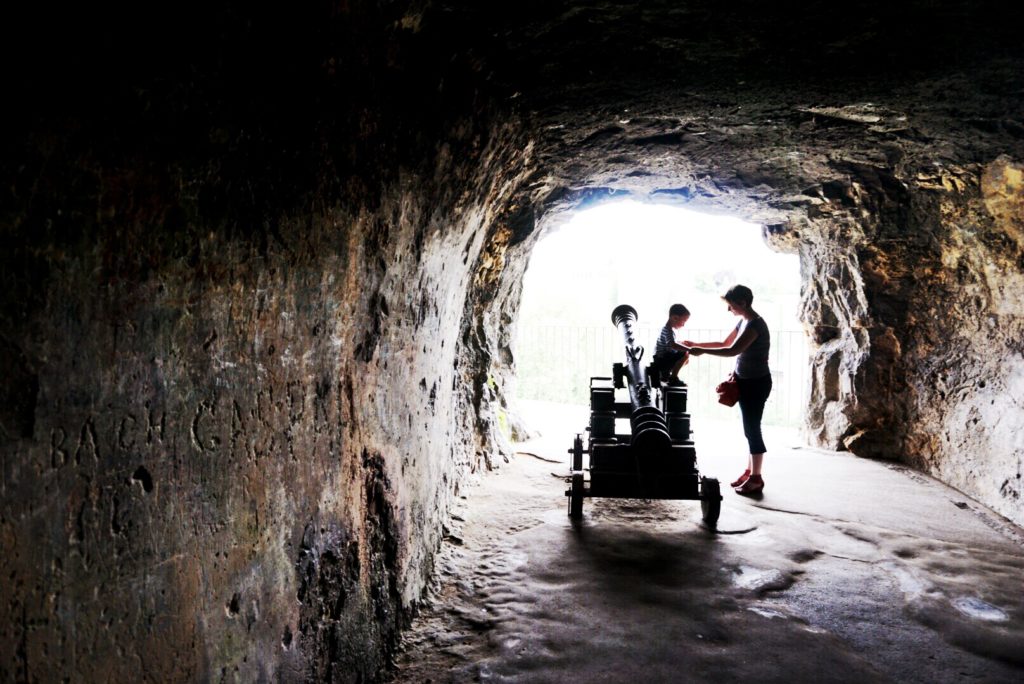 Roaming through the Bock Casemates is like entering the heart of the city’s beginnings because you can observe where soldiers from Luxembourg’s previous monarchies lived and protected the old castle centuries ago. The Bock Casemates were also used as a bomb shelter, housing a significant amount of the city’s population during World War II. Fair warning for tall people with bigger feet (present!): watch your head when exploring and employ lots of patience, baby steps and humor while hanging on to the walls as you make your way down the narrow, antique spiral staircases.

In addition to checking out the Bock Casemates, take a moment to stand at Chemin de la Corniche, which has been hailed Europe’s most beautiful balcony. And it’s rightfully so, because you’ll observe stunning panoramic views of the Alzette River and stumble across a string of cool love locks. Lastly rounding out the Old City, I’d recommend taking in a view from below while wandering around the tranquil quarter of Grund, which lies along the banks of the Alzette River. This was my absolute favorite place in Luxembourg City! You can either get down to the Grund by walking or via elevator (crowd favorite). However you choose to head over, one thing for sure is every turn feels like you’re walking in a painting. I found it very easy to lose track of time sitting, sketching, and relaxing in this nestled cocoon away from the city center. Brasserie Bosso, located in Grund, has a cozy, bohemian atmosphere with a friendly wait staff serving up both traditional Luxembourg meals (heavy on the meats and starches) and cuisine from neighboring European countries – the trifecta being Belgium, France and Germany. The dishes lean more towards comfort than gourmet, with broken language conversations spiraling in the air. The restaurant is evenly divided between indoor and outdoor seating and it’s popular among locals and visitors alike, so depending on the time of day you arrive, you could stand a bit of a wait. If that’s the case, wine lovers, grab a glass of Luxembourg Riesling. Luxembourg is particularly known for its crisp, dry white wines, which are produced in the Moselle Valley. You’d be hard-pressed to find these regional options outside of the country. As a red wine lover who tends to lean towards full-bodied selections (Oliver Pope style), I was pleasantly surprised and even picked up a duty-free bottle at the airport. There’s nothing like a sweet retreat to cure a sweet tooth. A great place to stop off for a fix is Chocolate House, where you can choose from over 50 different types of chocolate, with the staple being the hot chocolate spoon!

Right across the street from Chocolate House is the Grand Duke’s Palace. How badass is it that Luxembourg is run by a Grand Duke and might I add, the world’s only remaining Grand Duchy? The Grand Ducal Palace is now used more as a meeting/work space and is actually open for public viewing during the summer. This is also a great area to people watch (which was my favorite activity if you haven’t noticed!) as well as shop since there’s a concentration of trendy stores like Honey\Mustard, which screams Scandinavia in a great way. Window shopping (or splurging) at Honey\Mustard will give you the general aesthetic of the urban-chic Luxembourg local which seemed to veer towards basic, neutral tones and clean lines, with a leather or sports jacket as an accent piece. For sneaker enthusiasts, Stitch was nice to breeze through with lots of funky items merging hip hop, rock & roll and skateboard culture – a sporty, street style sensibility I spotted often amongst young millennials. Being a sucker for street art, I decided to skip the traditional museum route and made sure I headed over to check out some graffiti at Skatepark Hollerich. Formerly a slaughterhouse complex, the space now welcomes and encourages artists to adorn its walls with tags and large graphic pieces. Skatepark Hollerich also carries the only indoor skate park in Luxembourg with fun ramps, half pipes and rails for skateboarders and bikers to practice their moves.

During my visit, I ran into Luxembourg street artist, Mano, finishing up one of his pieces and he kindly obliged my picture taking. 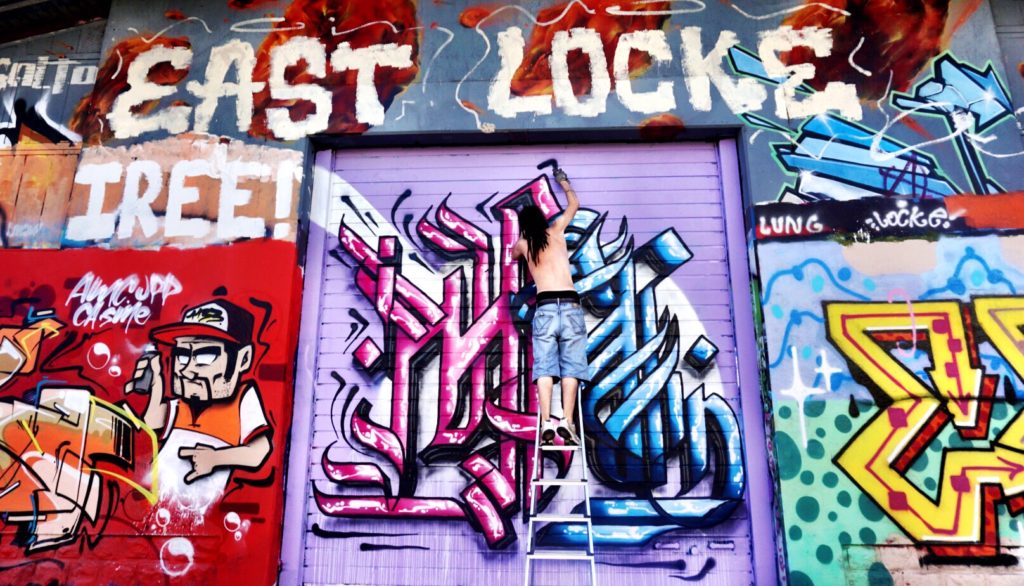 Experiencing Skatepark Hollerich made me feel nostalgic about 5Pointz back home in Queens, New York, which is an internationally recognized graffiti mecca that has since been demolished due to gentrification. As you can imagine, it was refreshing to witness public support of this typically underground art community. Parks, gardens and green spaces are a huge deal in Luxembourg City, covering a third of its surface. Chances are if you’re walking around, you will stumble across a rest stop doubling as a photo-op. One of my favorites was Merl-Belair Park, which is actually popular amongst locals with kids and has quirky public art pieces throughout its grounds, along with serene ponds. It was a great place to recharge and yet again, people watch! The surrounding townhouses in the neighborhood near the park also made for wonderful eye candy. 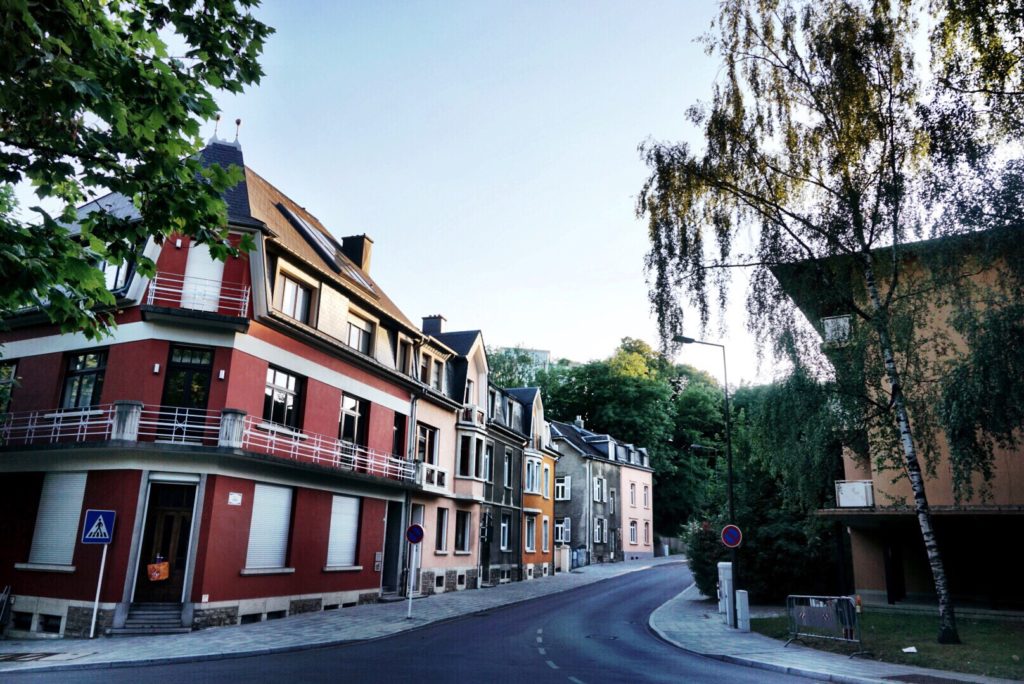 My foodie belly sang at Ristorante Essenza, a staple Italian restaurant in the city with great seafood options. The wait staff was extremely accommodating with special dietary needs having clearly marked menus listing possible allergens in each dish. I opted for the marinated mixed fish carpaccio as an appetizer (delicious!), Duck Breast in chestnut honey confit with raspberry sauce as my entrée (yummy!), mascarpone cream & strawberries for dessert (omg!) and topped off my meal with a glass of black currant champagne – another regional selection (::le sigh::). 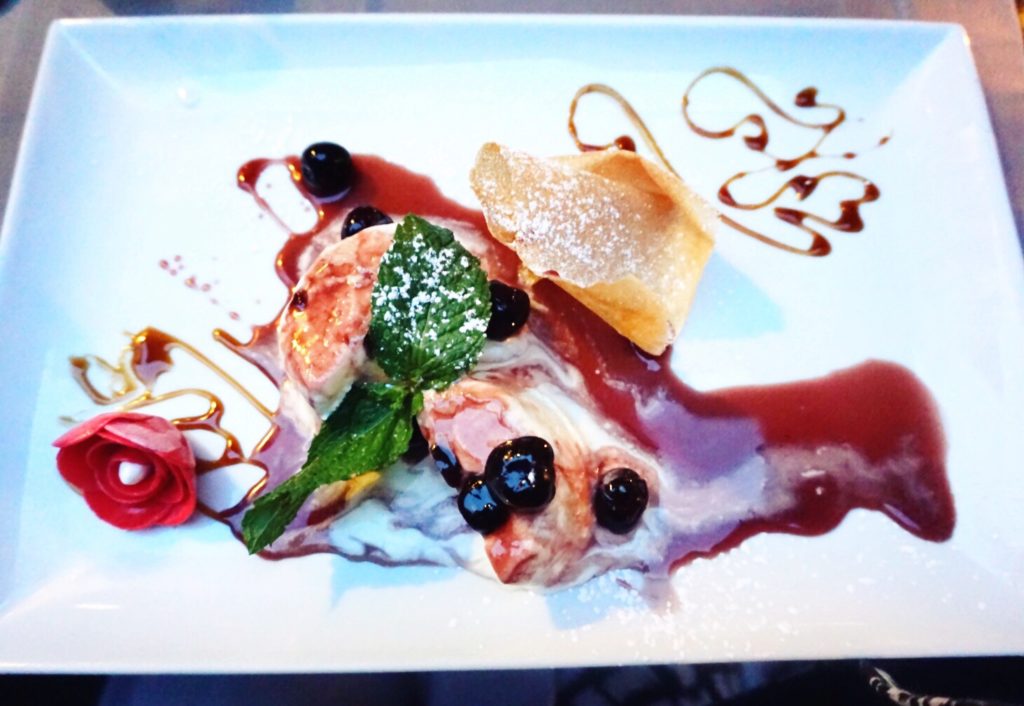 Though Essenza lies on the pricier side, the succulent, mouth-watering plates were well worth it! Heads up: Getting to the restroom is a bit like walking through a labyrinth, but the contemporary modern décor makes finding it that much more interesting. In Luxembourg, nightlife literally spills out into the streets during the summer and especially on weekends. There’s a lively bustle of hip city dwellers clinging glasses while enjoying the weather in the middle of the walkways. This wild, yet oddly orderly scene, not too far from the Grand Duke’s Palace, captured my attention so I ventured into popular Japanese-inspired bar & cafe, Go Ten, with some local friends. The crowd was largely made up of hip, young professionals. Being there and having the opportunity to listen to all the different types of languages being tossed around in the same space was all the entertainment I needed. As far as the menu goes, gin-infused cocktails along with a selection of Japanese appetizers are their specialties.

A full yet exhilarating day around Lux didn’t even scratch the surface of what this entire city has to offer. There is still so much to see and do within the city proper (particularly surrounding the arts) and out in the countryside, which leaves me yearning for another day to explore Luxembourg.

Stay tuned for round two!

This experience was sponsored by Luxembourg Tourism.