While June is Pride month, and we take time to celebrate members of the LGBTQ community across the world, there are several global Black LGBTQ history makers that we should celebrate all year round. Not only for their contributions to the progression of the acceptance of the community, but their fight as global Black leaders in general.

Here are 10 amazing global Black LGBTQ history makers for you to get into. Born around 1858, William Dorsey Swann was a 19th century American LGBTQ liberation activist. He was born into slavery in Maryland, and was subsequently freed by Union Soldiers following the Emancipation Proclamation in 1863.

The self-proclaimed ‘Queen of Drag’, William organized a series of balls in Washington DC, mostly for former enslaved men who gathered to dance in satin and silk dresses.

He went on to become the first documented person in the United States to lead a queer resistance group, as well as and the first known American to openly identify as a drag queen. He was arrested numerous times in police raids, including for ‘female impersonation’, and is the first American on record to defend by law the LGBTQ community’s right to gather.

Swann died in 1925. His legacy and story have been brought to international attention thanks to the author Channing Joseph. His biography The House of Swann: Where Slaves Became Queens is due to be published later this year. Born in 1583, Nzinga Mbande was queen of the Ndongo and Matamba regions in modern-day Angola. Born into the ruling family, as a child Nzinga received military and political training. She was skilled at fighting with an axe, and as an ambassador to the Portuguese empire she showed great diplomatic acumen.

Following the deaths of her father and brother, Nzinga became queen and reigned for almost forty years. At a time when the Portuguese were expanding their colonial empire in Africa as well as the Trans Atlantic Slave Trade, Nzinga fought against the Portuguese for the independence of her kingdom.

Nzinga reportedly dressed in male clothing, and dressed her male lovers in women’s clothing, calling them her ‘wives’. She is considered by some to be an early African LGBTQ icon.

Nzinga died in 1663 and there is a statue of her in Luanda. Yasmin Benoit is a British model and activist who advocates for the visibility of the asexual and aromantic communities.

Born in England in 1996, Yasmin is of Caribbean descent. She studied Sociology and earned a masters in Crime Science. From an early age, Yasmin recognized that she had not developed sexual or romantic interests in the same way as most of her peers. It was once she began to interact online with other asexual and aromantic people that she fully embraced that aspect of her identity and began her work as an activist.

Her modelling career began aged sixteen and over time she transitioned into lingerie modelling. She has written for major publications, made numerous TV appearances and in 2019 she created the hashtag #ThisIsWhatAsexualLooksLike. She was instrumental in launching International Asexuality Day on April 6th 2021. Born in 1945, Marsha was an LGBTQ rights activist from the United States. She was a prominent member of the Stonewall uprising of 1969, a founding member of the Gay Liberation Front and co-founder of the Street Transvestite Action Revolutionaries. She was also an activist with the grassroots coalition for AIDs awareness, ACT UP.

The ‘P’ in Marsha P Johnson stood for ‘Pay It No Mind’, which is how Marsha responded to people who questioned her gender.

Marsha died in 1992, aged 46. Her body was found in the Hudson River and the circumstances of her death remain unknown. Despite evidence of a violent struggle, her death was initially ruled a suicide and was never fully investigated by the police.  Find out more in the Netflix documentary called: The Life and Death of Marsha P. Johnson. Jim McHarris was a transgender man born in Mississippi in 1924. Although born anatomically female, Jim transitioned in his early teens. He lived nomadically for many years, moving frequently to different cities across the Midwest. Jim worked numerous jobs, including as a cook, mechanic, gas station attendant, taxi driver and a shipyard worker.

In 1953, Jim settled more permanently in the town of Kosciusko where he began to build a life. During that time he was even engaged to be married to a young woman. It was a year later in 1954 that things took a turn for the worst.

Jim was pulled over by the police at a traffic stop and arrested him when they noticed he had alcohol in the car. A pat down search revealed that Jim was anatomically female.

As a result, he was sentenced to 30 days at the local prison and was housed with a female inmate. Upon his release, he was met with hostility from many of the local townspeople and decided it was time to leave Kosciusko.

When interviewed in a 1954 article for EBONY magazine Jim said: “I ain’t done nothing wrong and I ain’t breaking no laws”. Bayard Rustin was a leading activist and advocate for civil rights and gay rights in America. He was born in 1912 in Pennsylvania and was raised by his grandmother, who was a prominent member of the NAACP. This influenced Bayard from a young age to campaign against racial injustice and the discriminatory Jim Crow laws.

During his lifetime, Bayard Rustin worked closely alongside Martin Luther Jr, and was instrumental in organizing several peaceful protests, including the March on Washington for Jobs and Freedom. This march is credited with being one of the largest political rallies for human rights in United States history, and was where Martin Luther King Jr delivered his iconic ‘I have a dream’ speech.

Bayard also served on a number of humanitarian missions including in Vietnam, Cambodia and Haiti.

In the early days of his career, taboos surrounding his sexuality prompted him to take a more behind-the-scenes role in the civil rights movement, though later in life he became an advocate for LGBTQ rights.

Bayard died in 1987, and was survived by his partner Walter Naegle, who is the executive director of the Bayard Rustin Fund. In 2021, it was announced that Michelle and Barack Obama’s production company ‘Higher Ground’ had commissioned a biopic of Bayard Rustin’s life for Netflix. Alicia Garza is well-known for being one of the co-founders of the Black Lives Matter movement. Born in 1981, she is a writer and American civil rights & LGBTQ+ activist.

Together with fellow activists Patrisse Cullors and Opal Tometi, Alicia co-founded the Black Lives Matter movement. In 2013, after George Zimmerman was acquitted of murder for the death of Trayvon Martin, Alicia posted on Facebook: “I continue to be surprised at how little Black lives matter…Our lives matter.” This went on to inspire the hashtag #BlackLivesMatter.

In 2020 Alicia published her book: The Purpose of Power: How we Come Together When We Fall Apart. Her writing has been published in The Guardian, Rolling Stone and Huffington Post, among other major publications. Alice Walker is best known for her seminal 1982 book ‘The Color Purple’, for which she won the National Book Award and the Pulitzer Prize For Fiction.

She was born in rural Georgia in 1944, to sharecropping parents. Growing up she had to attend a segregated school for black students, and after winning a scholarship from the state of Georgia, she enrolled in Spelman College in 1961.

Throughout the 60s and 70s, Alice taught at various universities, as well as working for the Legal Defense Fund of the NAACP. In 1982, it was her novel ‘The Color Purple’ that propelled her to international acclaim. The novel was adapted into a movie in 1985 featuring Oprah Winfrey and Whoopi Goldberg and directed by Steven Spielberg.

Alice Walker is a feminist, and in 1983 she coined the term ‘Womanist’ to mean ‘a black feminist or a feminist of color’. 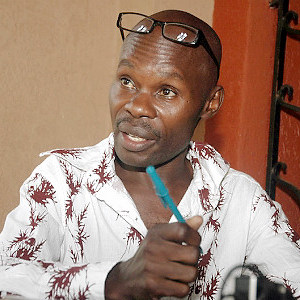 The late David Kato is sometimes referred to as the ‘father of Uganda’s gay rights movement’. He was born in 1964 in Nakawala, Uganda, and was a teacher for much of his career. After being fired from a teaching job in Uganda in 1991 over his sexuality, David relocated to teach in South Africa. He returned to Uganda in 1998 and bravely came out during a press conference, after which he was arrested and held in police custody.

From this point onward, David became an active LGBTQ rights activist. In 2004, he became one of the founding members of SMUG (Sexual Minorities Uganda) and he called upon the Uganda Human Rights Commission to advocate LGBTQ rights in Uganda, though his appeal was met with derision.

In October 2010, David Kato’s name was included in a list published by a Ugandan magazine which called for the execution of 100 alleged members of the LGBTQ community and published their home addresses. Although Kato successfully sued the magazine and the hate campaign was ended, David’s home address had already been leaked.

On January 26th 2011, David Kato was assaulted in his home with a hammer and died en route to the hospital. Although the police initially blamed the murder on robbers, David’s colleagues asserted that the murder was a homophobic hate crime. A man named Nsubuga Enoch was convicted and sentenced to thirty years hard labor for the crime. David’s murder was condemned by Human Rights Watch, Amnesty International and the European Union, as well as Barack Obama and Hilary Clinton.

In 2014, David was inducted into a public display in Chicago called the Legacy Walk, which honors outstanding members of the LGBTQ community. Born in 1979 in Rio de Janeiro, Marielle Franco was a Brazilian politician and human rights activist. Marielle came from humble beginnings and became a single mother when she was still a teenager.

This did not hold her back in her ambitions, and Marielle earned a degree in social sciences followed by a master’s in public administration. After graduating, Marielle went on to pursue a career in government, as well as working for civil society organizations. In 2016, she was elected to the Rio de Janeiro city council; as a black, single-mother from the favelas, this was a huge step in terms of representation.

During her time as a council member, Marielle championed many causes. She lobbied against gender-based violence and in favor of women’s reproductive rights. Marielle chaired the Women’s Defense Commission and collaborated with the Rio de Janeiro Lesbian Front. She was also an outspoken critic of police brutality and extrajudicial killings.

In March 2018, Marielle spoke out on social media against police violence in Rio de Janeiro. The following day, Marielle and her driver were assassinated by two assailants in another vehicle. A year later, two former police officers with government ties were arrested and charged with her murder.

Her murder was condemned by Amnesty International and Human Rights Watch, and thousands of people protested in the streets. In death her name and her message have had an even wider reach than in life, and her example has inspired activists across the world to continue her amazing work.