Authentic Jamaican Cuisine To Try When You Visit The Island

The birthplace of Bob Marley, Blue Mountain coffee, and Red Stripe beer is one of the most recognizable and popular Caribbean islands, so chances are you’re a stone’s throw away from a Jamaican restaurant in your neck of the woods. But if you want the authentic flavorful and spicy experience, we’ve compiled a list of dishes you need to try before leaving Jamaica.

If your only experience with beef patties has been of the frozen variety where you just chuck it into the microwave, then you’re in for a treat. The true Jamaican beef patty has a light, flaky outer shell filled with spicy ground beef mixed with garlic, onion, scotch bonnet peppers, paprika, curry, and many other seasonings. It’s not hard to find either.

The ubiquitous pastry can be found along the roadside and inside many restaurants around the island. This rich, hearty stew is a Jamaican favorite. It’s a tough meat but is slow-cooked with vegetables, butter beans, and of course all the seasonings until tender. The finished product is best served with another classic — rice and peas.

This deep-fried dough is a twist on the dumplings typically found throughout the Caribbean. The festival is crispy on the outside but soft and sweet on the inside. The texture is also a bit different from the traditional dumpling thanks to the addition of cornmeal in the recipe. Festival is the perfect accompaniment to jerk chicken. When people think of Jamaican food, they usually think of jerk chicken. The two are synonymous. It is a fusion of African and Arawak cultures in Jamaica. The dish has its roots in the time of slavery when the Maroons would smoke tough cuts of meat seasoned with spices from the Arawaks.

Traditional jerk seasoning calls for bird peppers, pimento, and pepper elder but modern recipes may include Scotch bonnet peppers, scallions, garlic, ginger, pimento, thyme, and cinnamon. Many versions are being made globally, but Jamaica is your only option if you want the real thing. 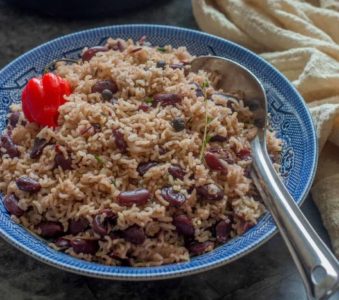 Not to be confused with peas and rice, rice and peas just might be the most consumed dish in Jamaica. It is a staple in almost every meal, particularly on Sundays and special occasions. The rice and kidney beans are boiled in fresh coconut milk, onion, scallions, garlic, bay leaves, herbs, and spices. It is fluffy, flavorful, and the ultimate complement to oxtail and other meats. 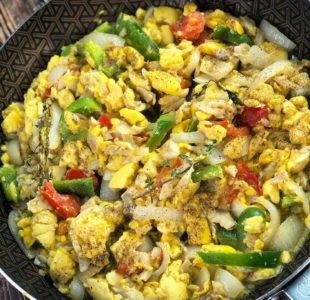 Jamaica’s national dish is unlike any other. At first glance, it may appear to be a plate of scrambled eggs. But that’s the ackee portion of the meal, a fruit native to tropical West Africa. The boiled yellow flesh is paired with saltfish (codfish) that has been sautéed with onions, garlic, tomatoes, and seasonings.

Ackee and saltfish is typically served for breakfast with Jamaican dumplings or hardo bread. It’s an acquired taste, but is as authentically Jamaican as it gets.