“I promise I’m not homeless, I just got back from a hike. I need one room for the night.”

This is what I said to the clerk who then smiled and checked me in. Barefoot and caked in mud from the thigh down, I tiptoed to my hotel room.  I peeled off my second pair of pants for the day after the requisite social media shots to prove that I got dirty, then tried to get as clean as possible. I wrapped myself in towels, ordered my pizza, and reclined on the bed feeling so accomplished. I had taken on the most difficult hikes in Hawaii (maybe in the world) within a span of 48 hours, then went surfing in between.

It started at 4 a.m. on Sunday. My crew and I researched the Haiku Stairs in Hawaii for months. We Googled, searched TripAdvisor, Lonely Plant, Wikipedia and downloaded every app necessary to have a successful hike. The stairs were built for military use before lawsuits and safety regulations were put in place. They are closed to the public. People have had fatal accidents and some have had to be airlifted to safety. The city takes no responsibility, financial or otherwise for these sad situations.

I rolled out of bed looking like an extra from Mission Impossible. I thought all I needed were my charged cameras and my phone. I ended up needing Jesus, Mary, Joseph, my mama, and a bunch of other disciples to help me up and down those “stairs.” It was pitch black and wet as we followed each other,  yelling to make sure that we were all alive. It was at least an hour and a half before we stopped at a full landing that wasn’t a set of stairs. Now, let me be clear…these were not your everyday stairs. This was a like a ladder that some giant slammed into the side of a mountain and someone called “stairs” as a big joke. There were steps missing. There were side rails that weren’t connected to anything. The way was so narrow that two people couldn’t fit side by side on the stairs at the same time. To pass, one person would have to climb over the side to let the other go. The stairs were on the top and sides of the mountain, so we got the brunt of whatever weather was going on at the bottom of the mountain. We were soaked and my skully (that was wet and stuck to my head) was almost blown off. I was almost blown off the mountain as well!

After two and a half hours of agonizing, treacherous trekking, we finally made it to the top. Instead of a beautiful view of the Hawaiian islands, we saw clouds. Instead of the wonderful island air, we had to make sure we were upwind of the smokers. There was nowhere to sit because everything was wet, but it was lovely. We took our pictures and I led the way down.

We ascended in the pitch black. That was a good thing. We were totally scared on the way down. We had no idea that we were on the edge of the mountain. There were points where the stairs were completely vertical. One slip and we would have had to deliver bad news to someone’s mother. Ten minutes before the end of the hike, the clouds lifted and we were blessed with the views that we thought we would have at the top. It was simply beautiful. It was worth the whole hike to be holding on to a rickety pole for dear life just to capture the sun peeking through the clouds. The shapes of the cloud shadows accentuated the sun-kissed spots making them brighter. Then we looked to the right and realized that we could probably die right there in Hawaii. The moment was over and we pressed on.

At about 8 a.m., we got to the bottom of the stairs and hugged the fence littered with “No Trespassing” signs. I was so delirious that I had a conversation with the fence. I vaguely remember saying, “Yes, I know. I should have listened, but I saw pretty things and didn’t die! We’re okay!” Grateful, tired, crazed, we fell into our cars. My buddies went back to sleep while I mentally prepared for day two. 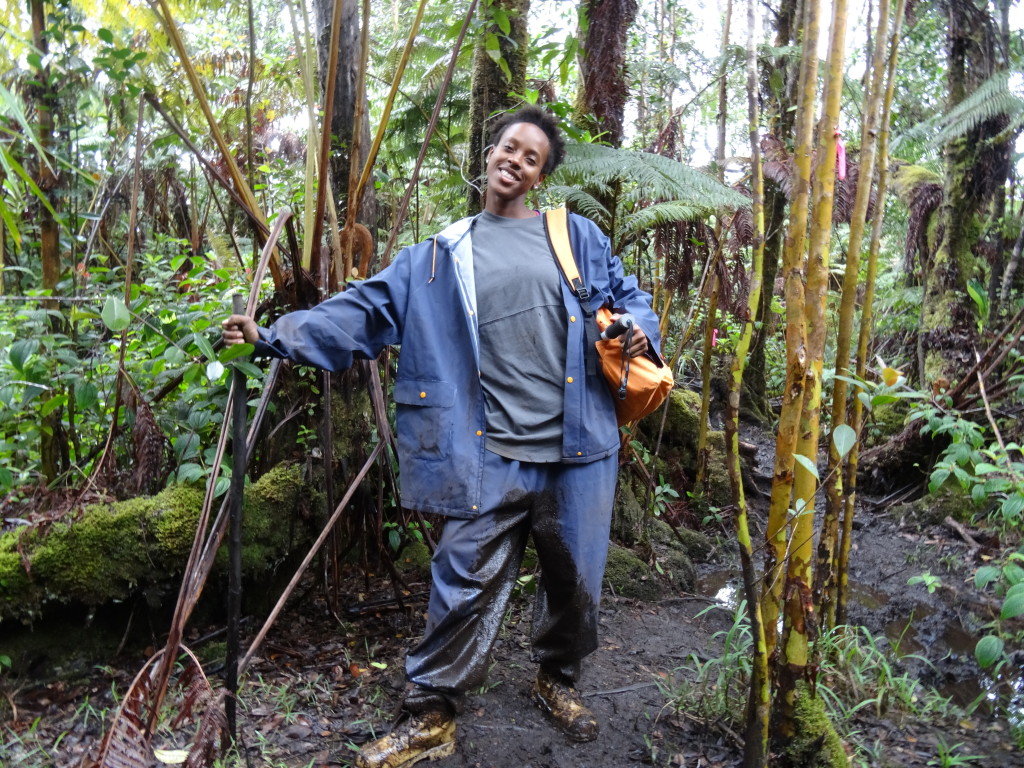 The next day, I flew out on the first plane from Oahu to the Big Island for a lava hike. I was only going because I wanted to take cool pictures. I didn’t read the reviews until I was waiting for the car rental guy to finish printing my agreement.

“Hardest hike ever, and I hike a billion miles a day!” one review said.

That wasn’t very encouraging, but I already paid. I was not going to let that money go to waste.

After a quick trip to the store, I headed to the meeting place. Everyone was running late. We piled into the van and rode 45 minutes to the entrance. We picked up our walking sticks and followed our leader. For three hours, we hiked through thigh-high mud, over trees, under trees, through trees, in the rain, through more mud, waited for the slow people before finally reaching the lava fields.

I have never seen anything like this in my life. The topography goes from rainforest to complete burnout desolation. There is a clear line where the forest ends and the lava field begins. Our journey to the part of the field where the lava flowed was like walking over steam vents. It was still lightly raining, so the steam rising gave an eerie feel the journey.

We felt the lava before we saw it. I had to adjust my eyes, because it looked like silver moving slowly. A part of it broke free and bright red and began to flow. I was in awe.

I watched long enough to see a new flow begin. The black ground would tremble, the ash would pop, the ground would separate and rise and then the lava would flow.

After an hour of snacking, resting and observing the beauty of Hawaii around me (and a quick change of pants for me…because my other ones split… in the crotch) we headed back. Our guide gave us headlamps because we would end up finishing the hike in the dark. Thankfully, most of the over/under/through part of the hike was done before black. We just had to deal with the thigh-high mud. Back at the van, we chucked our walking sticks, put our muddy items into plastic bags and headed back to town. I spent the return trip re-booking my flight, extending the car rental, and booking a hotel. I tipped the guide, threw my stuff in the trunk and headed to the hotel. Shower, pizza, rest, pack. My 48 hours in Hawaii was over. No more wet, no more dirt, no more life-threatening events for at least a day. Even I need a break every now and then.