The World's Most Dangerous Border

One Spring break, I decided to head to the unlikeliest of places – Seoul. I’d never visited Asia but had an old colleague move there 5 years prior and decided to visit her. I knew very little about Korea’s history but decided to do some research before I left New York.

Korea is sadly the only divided country in the world. After the Korean War (1950 – 1953), South Korea and North  Korea established a border that cut the Korean peninsula roughly in half.  Stretching for 2km on either side of this border is called the Demilitarized Zone (DMZ). Few folks (until more recent media headlines carefully tracking the movements of the North Korean regime), have ever heard of the DMZ. However, this name is rather misleading as this region is anything but de-militarized. Instead, thousands of South Korean troops (alongside 27,000 US troops!) are based here ready to take action in the event of a resurgence of war with their former northern counterpart. Despite the fact that this is the most heavily armed border in the world, it remains a major tourist attraction when visiting South Korea! On my solo trip to Seoul from Brooklyn, I, a lone brown girl, along with a busload of eager (mainly Chinese) tourists made an early morning trip to the DMZ. My friend had another important commitments and so, I ventured down into the hectic yet pristine subway and made my way to a nearby hotel for the tour pick-up. It was a quiet ride about 1 hour north from Seoul..I was incredibly anxious and was uncertain about what to expect on this tour. 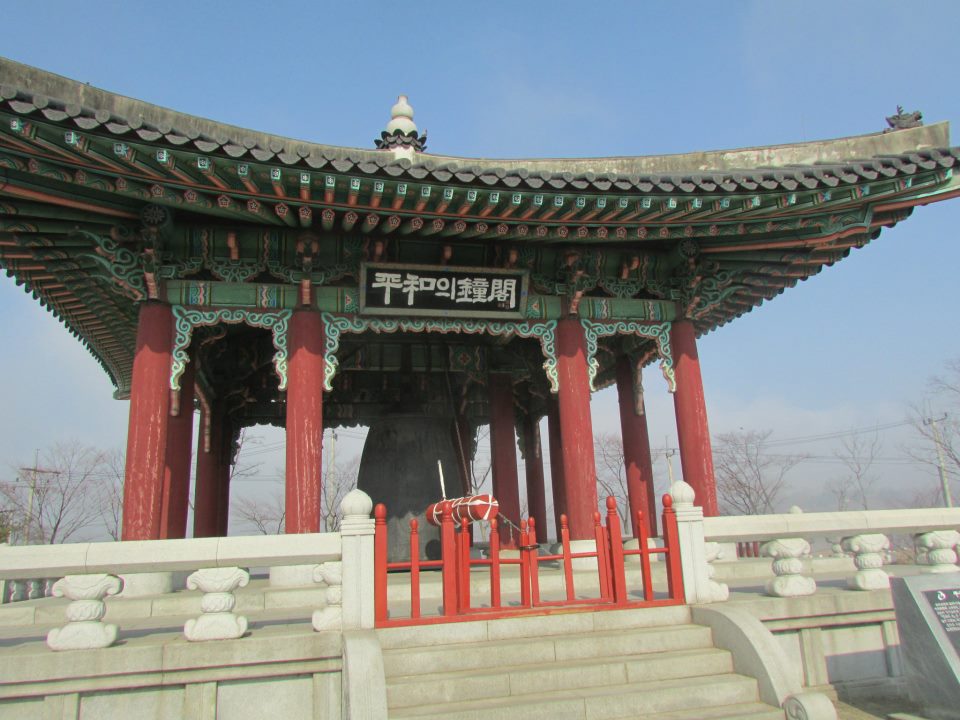 At Imjingak Village, there is a bridge called the Bridge of Freedom.  It’s name was given as nearly 13,000 prisoners of war crossed it to return home at the end of the Korean War. Many bridges existing before the war were destroyed but this bridge was built with the specific purpose of mobilizing prisoners of war. These prisoners were taken to the bridge, and then they walked across to return to their homes in South Korea.

At the bridge, you can’t miss the brightly colored ribbons tied everywhere. Any visitor has the opportunity to tie a ribbon on the bridge with a personalized message to wish for unification. Striking a solemn pose at the Freedom Bridge. South Korea. Thousands of ribbons left at the Freedom Bridge in Imjingak Village, South Korea.

The Dora Observatory is painted in camouflage. Located just inside the DMZ near Dorasan Station, the building houses an auditorium with a diorama of the western DMZ with a wall of windows facing North Korea. 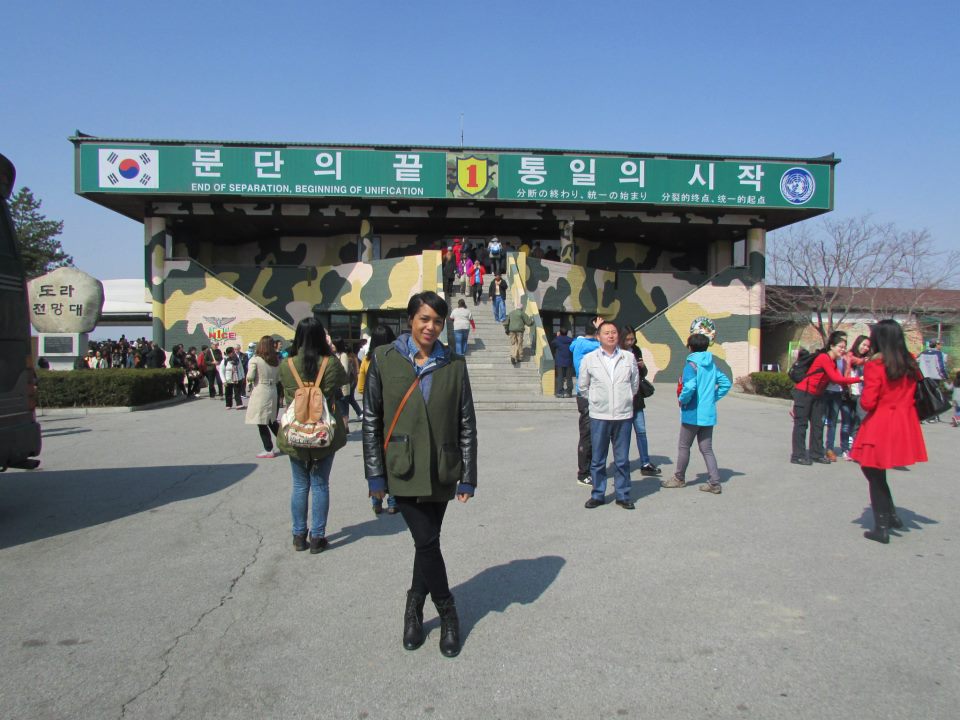 Me, standing at the entrance to the Dora observation point in the DMZ.

Outside to the left is a platform with a row of telescopes facing northwards. I paid 500 Korean won to see North Korea’s Gijeongdong propaganda or fake village, North Korean military personnel walking around, the world’s tallest flagpole (160 m) and the Gaeseong Joint Industrial Complex. You cannot take photos from outside the yellow lines unless you want your camera confiscated by soldiers there. An elderly woman did just that while I was there and a stern-faced solider immediately seized her camera from her bare hands and deleted her photos! 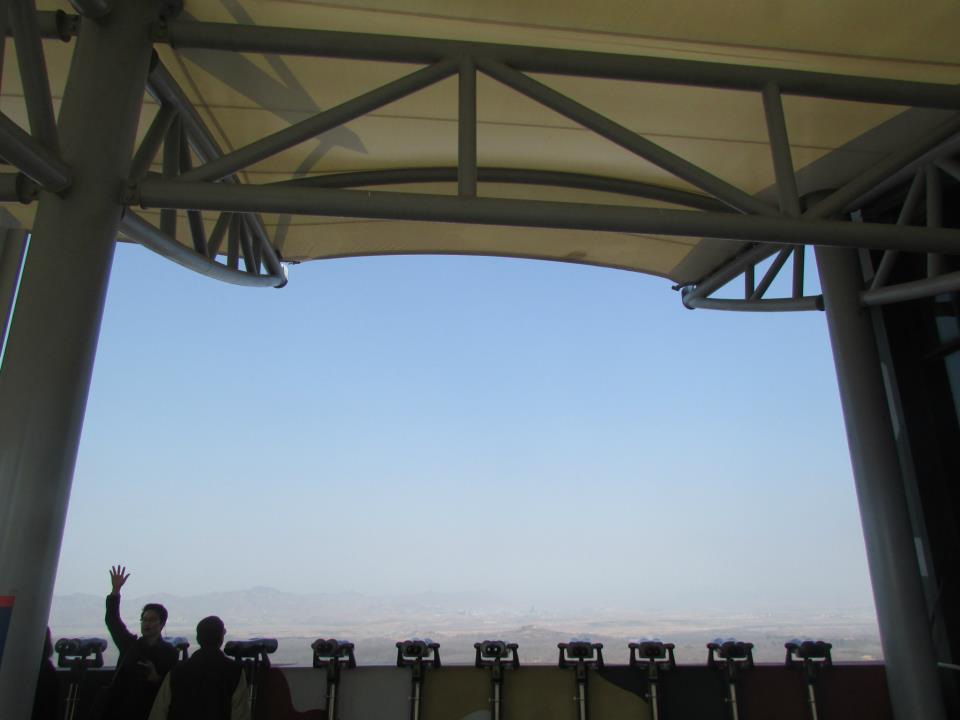 My first glance over the border into North Korea. You can see its bare mountains and sparse pockets of settlement in the distance. 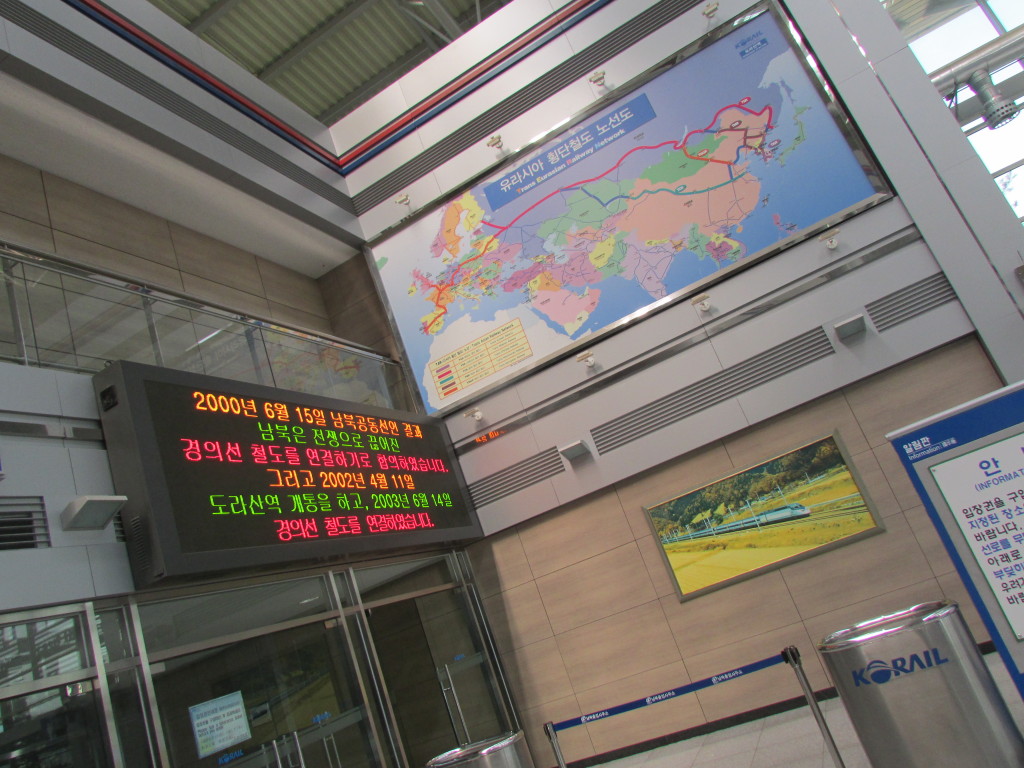 A commemorative tribute to all the South Koreans who contributed money to rebuild and open the Dorasan train station.

This was undoubtedly the highlight of the tour. In the late 1970′s, South Korea discovered an underground tunnel that lead from North Korea directly to Seoul. They soon discovered 3 other tunnels, all of which also lead to Seoul. North Korea claimed they knew nothing of the tunnels and did not dig them. South Korea however, was not sold on their claim and immediately built blockades so that no one – North Korean troops for example – could invade their beloved capital city. The entrance to the 3rd infiltration tunnel at the DMZ.

These tunnels all directly run across the DMZ and are now able to be visited by the adventurous and curious traveler. The 3rd tunnel was discovered in 1978. It is located a mere 52 km from Seoul. Some  estimate that it would take only 1 hour for 10,000 soldiers to move through this tunnel. At the 3rd tunnel location, I was given a bright yellow hard hat and then trekked down a longggg slope to the end of the 3rd tunnel.. The tunnel itself is about a mile long. I spent the entire time hunched over as I made my way to the first blockade, a thick concrete wall, which stood only an incredible 170 m away from the North Korean border. Photos are forbidden and you are not allowed to take cameras into the tunnel but I am a dare devil =)… 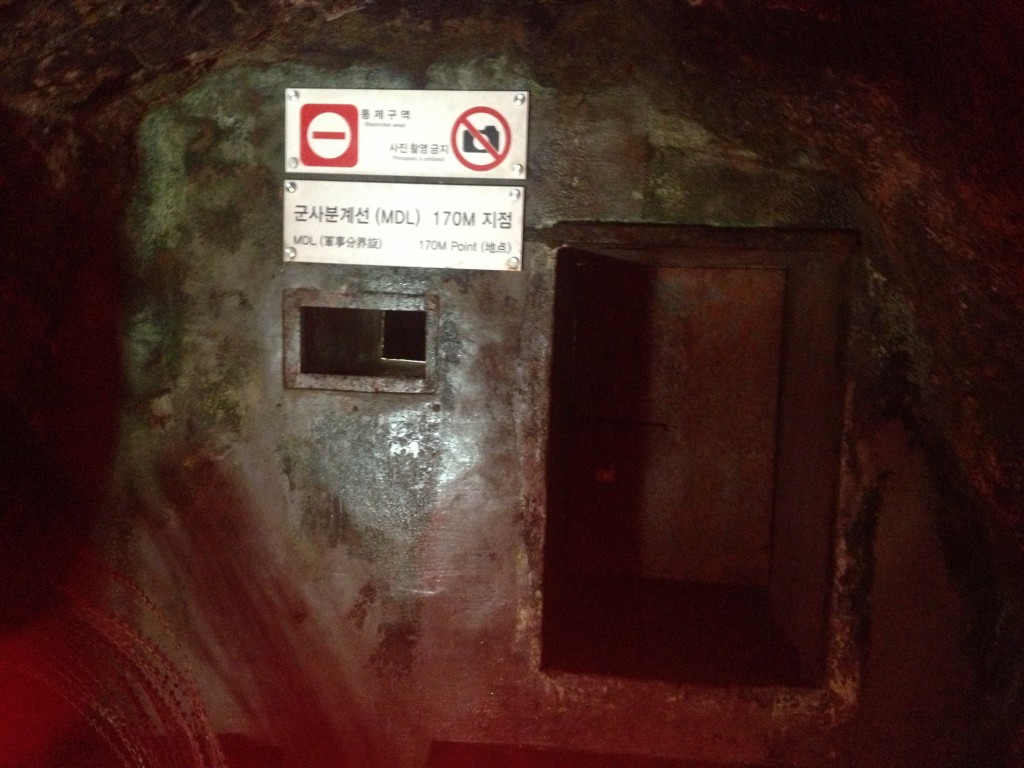 Blockade at the 170 m mark in the 3rd infiltration tunnel.

According to my previous research, I learned that the high point of many tourists’ DMZ visits is a small group of huts in the JSA (Joint Security Area) in an area called Panmunjom, which straddles the border. The JSA is the only place where South Korean and North Korean troops directly face each other, head-to-head, and the tension is real. Unfortunately, I did not get to experience this as it was closed off to tourists on the day of my visit.

This Korean border is a surreal place with a dual identity – a partly dangerous war zone and at the same time, a touristy Disneylandish hot spot alive with the intrigue of its many visitors. You can either be stricken with fear at the presence of the many stern-faced  troops, tanks, missile, bunkers, and land mines (yes, the were everywhere). Or – you can become entranced by the serenity of the mountains, wide green plains and many bird species cavorting happily upon gentle winds.

Overall, my visit to the DMZ was an unforgettable experience. The remnants of war are real and despite how exhilarating this experience was as a visitor, it was a harsh reminder to not forget that there are millions whose lives are eternally affected by this ongoing clash between these two Eastern nations.