Uganda: Falling In Love With The Pearl Of Africa

For any prospective traveler looking to experience a different location, there are often two paths one can take: heading to destinations that are trendy or choosing to travel off the beaten path in a way that will ultimately feed your soul. As a seasoned traveler, I choose the latter. I love to explore new places to gain a deeper understanding of the culture and socio-political climate that shapes a country, and I was recently able to do both on a trip to Kampala, Uganda. The trip was fueled by my passion to see as much of Africa as possible and by an invitation, I received to perform my one-woman play, The Woman Who Would Be King, at the Kampala International Theater Festival.

RELATED: What It’s Like To Be A Black American In Nairobi, Kenya

It’s easy to see why Uganda is called the “Pearl of Africa” as it boasts brilliant wildlife, impressive natural landscapes, and Lake Victoria, Africa’s largest lake. Even if you don’t visit a natural park, you may spot gorgeous birds and exotic wildlife along the way. Only a few short years ago Uganda was called the “Best Country in the World to Visit” by Lonely Planet,  one of the “World’s Top Travel Destination” by National Geographic, and “One of Africa’s Friendliest Nations,” by the African Economist. However, when I told my friends I was heading to Uganda, one of my close girlfriends openly admitted the only visual association with the country she had was an image of poverty or war-torn conflict. Although Uganda has had a history of war, dictatorship, and an HIV epidemic that wiped out large numbers of the population, the people have stood strong and are incredibly welcoming and kind to visitors. After my visit, I can confirm that there are still many wonderful reasons to visit Uganda.

Opportunities to Give Back

The wealth disparity in Kampala is real. We experienced all sides of it from low to high. My colleague and I spent the first day visiting a small orphanage in Kampala called Samaritan’s Way Kindergarten and Orphanage, which has around thirty-six students who, in most cases, have no family or prospects for a formal education. The modest school grounds included classrooms, places for the children to sleep, a small playground and garden where they grow their own herbs, as well as a kitchen which consisted of pots to be warmed by a fire. The teachers often run out of food to feed the kids and have to spend their own money to keep the school going, but they press on and create a warm, Christian-centered environment by any means necessary. After donating supplies and money to assist with some of their expenses and helping our jovial driver push his taxi out of a deep pothole in the road, we left Samaritan’s Way with our hearts full of gratitude. It was fulfilling to be of some service, however small, and to be reminded of the privilege we’ve experienced in our own lives.

For a few short days, we stayed in a very bare bones hotel called Minister’s Village in the heart of Ntinda. The staff was like family and their traditional food was delicious. However, the hotel is right in the center of the hustle and bustle of the city and every morning I would awake to the sound of roosters crowing (yes real roosters), the Muslim call to prayer, parties, and sometimes the occasional drunken fight. Kampala never sleeps. After taking some photos on the dirt road leading to the place that had started to feel like home, we left Minister’s Village for the Kampala Serena Hotel, a beautiful five-star hotel with amazing gardens, a picturesque pool, and an incredible spa and gym. The staff and service were impeccable, the rooms were lovely, and the food was amazing and catered to many different food sensitivities. I’m vegan and before visiting Uganda, I had no idea that many of their dishes would be plant-based. I was pleasantly surprised to find that I had no problem finding something eat wherever we went. Matooke — their green bananas, posho — made from corn flour, chapati, eggplant,  pinto beans, pumpkin, and greens that tasted similar to callaloo were among my favorite of the local dishes. Because of the large Indian population in Uganda, finding deliciously authentic North Indian cuisine is not a problem. Curry for breakfast, lunch, or dinner? In Kampala, it’s possible.

There are many reasons to visit Uganda, and the art and culture scene is top on my list. Before I left the U.S., I had seen an intriguing segment featured on CNN Africa about Latif, the Ugandan fashion designer who can make a dress in four minutes, and managed to get his contact before arriving. I visited his home which he fondly calls “Ras-Mas,” and was fitted for a custom-made jumpsuit I sketched while on the connecting flight from Amsterdam. While there I also met with Matt Bish, a Ugandan filmmaker who has managed to produce several films shot in Uganda that have traveled internationally to festivals like Cannes. On my last day, I collaborated with local fashion designer Eguana Kampala and Guilio Molfese, one of the best photographers in Kampala, to shoot some epic photos on the beautiful grounds of the Kampala Serena Hotel. 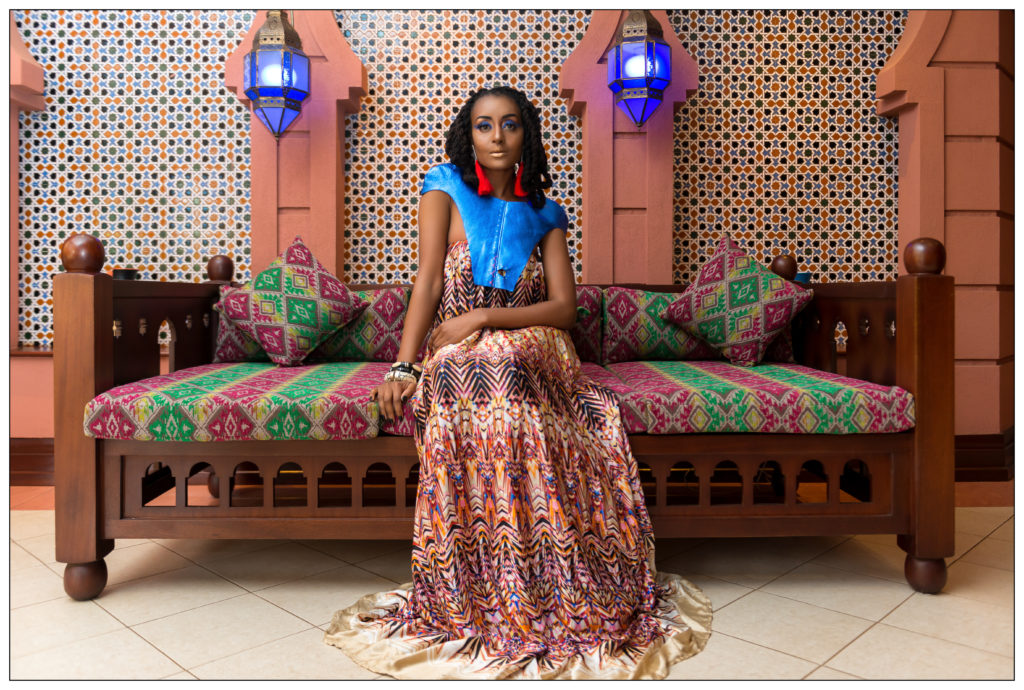 Taking in the sounds, sights, food, and deep conversations with the amazing people of Uganda during my time in Kampala fed my soul. During the entire trip, I felt the weight of being black in America lifted from my shoulders and I felt an inner peace and joy I haven’t felt in awhile. My skin even had a newfound glow from the daily sunshine and those stress-free spa days. As I packed my bags, I thought back to my friend’s comment associating Uganda with poverty. I chuckled because I couldn’t help but think that if people knew what a gold mine Africa really was and began to truly cherish the continent, nothing will stand in the way of Africa rising to its full potential.