I first met Dionne at a summer camp for incoming freshmen. Little did we know, that would be the start of our nearly two-decade friendship and travel adventures. After graduating we started taking trips together. One such trip was in August 2017 where we visited Puerto Rico, just days before the hurricane.

We arrived in San Juan and were immediately immersed in Spanish culture. One of the things that people failed to inform us was that a large majority of the population does not speak English. So, we were forced to rely on Dionne’s remembrance of her Spanish from 10 years prior. I’m sure you can imagine how well that went.

We wanted to experience as much of the island as possible. We went to local clubs La Factoria and Brava to experience the nightlife, took a ferry ride to Old San Juan for authentic mofongo, hiked the El Yunque Rainforest, drank Pina Coladas on Luquillo Beach, and the most infamous of our excursions, canoed the bioluminescent bay, and snorkeled in the waters of Culebra beach. 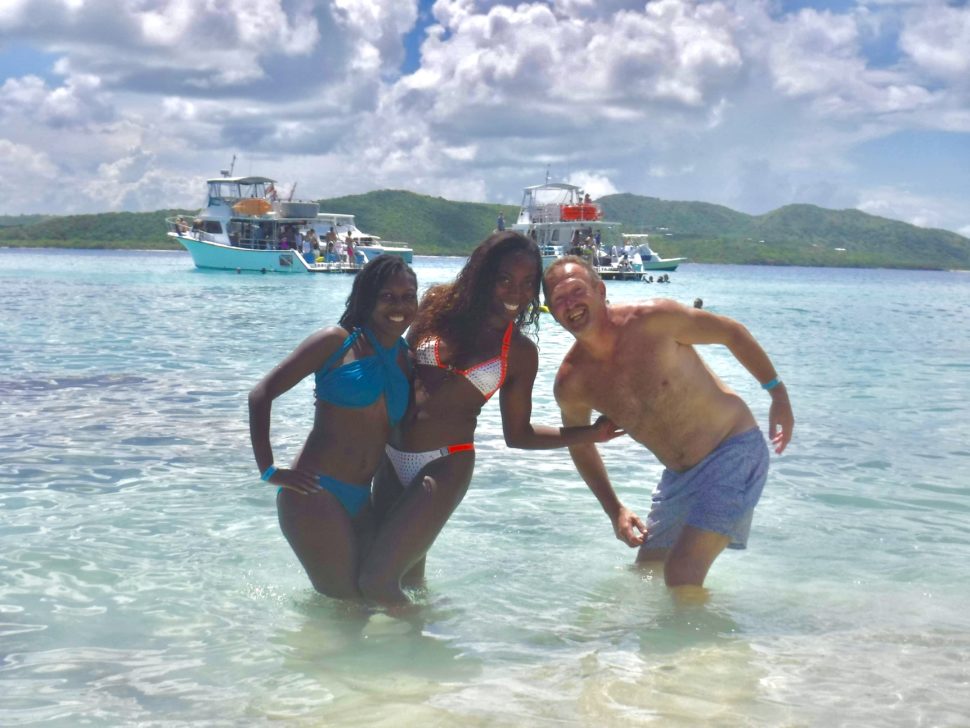 The day began with a 45-minute boat ride to the ‘best snorkeling location the island has to offer!’ Our marvel at the splendor and serenity of the location was abruptly interrupted when the guide stated, “Everyone knows how to swim right?” We glared at each other and shakily raised our hands to confess that no, we, in fact, do not know how to swim. We assured the guide and other travelers that we didn’t know how to swim but were not afraid of getting in the ocean and were very committed to not die so they didn’t have to worry.

We were given floatation devices, fins, and snorkeling gear and eased into the warm waters of the ocean. We found the fins to be extremely heavy, the mouth-piece and goggles uncomfortable, and after all the hype we were disappointed to find only 1 fish the entire time. Snorkeling was followed by a short boat ride scheduled for Flamenco Beach, however, we were informed the waters were extremely rough at that location so we took a detour.

You see we’d planned an elaborate photo shoot for ourselves on Flamenco beach. We were determined to get the best travel beach photos anyone had ever seen and now our plan was thwarted by our need to survive. There was no way we could get our beach towels to the shore let alone anything else.

Armed with a waterproof camera and floatation devices we eased into the warm water again and doggy paddle towards the beach. Almost to shore I hear a shriek from Dionne that startles me and at the same time, my fin is stunted by an unknown object. As we both began to scream for fear of the unknown, and possibly about to attack, we arrive at the beach. Relieved to be on solid ground we discover that Dionne has several cuts on her leg and that the object was not a man-eating shark, but coral reef. Who knew that coral reef was so sharp and dangerous?! Although our snorkeling and beach combing adventure resulted in seeing no sea creatures, severe sunburns, being attacked by coral reef, and less than perfect photos we’d do it all again! We learned valuable lessons for our next adventures. We’ll be sure to make NO assumptions and get all of the details in advance, we learned to be flexible and appreciate the detours, and we also learned to not be ashamed of our truth. Although we were the only 2 admitting not knowing how to swim, there were others, but they had traumatic experiences while in the ocean. Because we admitted not knowing how to swim the other travelers were extremely supportive and some stayed near us to make sure that we were ok.

While enjoying our last day in Puerto Rico we began to get alerts on our phone about evacuating due to the hurricane. Family messaged asking us if we were safe and when we’d return. We were fortunate enough to have flights booked the next morning but more fortunate to have experienced Puerto Rico in all of its grandeur. I look forward to revisiting Puerto Rico and encourage others to do so but I also encourage you to learn basic Spanish, learn to swim, invest in a large water-proof case, and don’t be afraid to rely on strangers.