I knew little about Singapore, a sovereign city-state and island country in Southeast Asia, before taking off to spend a couple of days there with a friend who I worked under as a budding writer in Washington, DC. He moved there from the nation’s capital a year ago and pens articles about the highly urbanized metropolis, which boasts the world’s highest percentage of millionaires (one out of six households in Singapore have at least $1 million US dollars in disposable wealth).

I anticipated a crush of people, high-rise buildings and drinks I couldn’t afford. In fact, another friend visiting the region before me fled Singapore in a matter of hours because of steep prices and her feeling that the city had no soul and very little to do. That wasn’t my experience at all. With my friend and mentor, George, as my guide, Singapore unfolded before me as a fascinating city with pockets of rich culture–the type of place that in seconds can take you from ethnic foods being hawked on street corners to creative cocktails being swirled in swanky skyscrapers, a dizzying dichotomy I loved.

After declaring its independence from the UK in 1963, Singapore developed rapidly, earning its reputation as one of the original Four Asian Tigers, with Hong Kong, South Korea and Taiwan being the other three. Today it’s one of the world’s major commercial hubs with the fourth largest financial center and one of the five busiest ports anywhere. Because it has long been an island of economic opportunity, it’s highly diverse with ethnic Asians from China, Malaysia and India, making it a melting pot for culture and delicious cuisine. Dining, in fact, along with shopping, are considered the country’s national pastimes. I spent a few days doing both as curious George directed me through historic districts, cultural hubs and hip new neighborhoods. Below, find my 24-hour guide to Singapore with tips from a new local.

After settling in and freshening up, head to dinner at Ramen Keisuke Tori King and dip into a hot and hearty bowl of ramen. While you wait on your main course, munch on free-flowing servings of boiled eggs and spicy sesame bean sprouts. The varieties are aplenty, but the “spicy black” ($12 SGD) is a must. The broth is rich and flavorful, the custardy brine egg thrown in is salty and amazing, and healthy servings of chili will leave you sweating, in a good way. Wash it down with a bottle of Sapporo, and if you’re dining in a group, don’t expect too much conversation–it’s that good.

Take a short walk from dinner to Ann Siang Road, a hill stacked with an impressive selection of nightlife options teeming with diverse crowds of ex-pats. There are speakeasies, laid-back bars and upscale lounges. Survey the scene and check out a few. When the night’s winding down, settle in at PS.Cafe for a final drink. It’s a sweet little spot that sells stellar cakes by day and strong cocktails by night. With a decor of shiny black tiles, mirrors, chandeliers and large floral displays, it’s like an ultra blinged-out brasserie. Have your drink on the roof for great views of Singapore’s cityscape by night. Pop into Tong Ah Eating House, Singapore’s institution for the city’s signature “kaya toast” breakfast. The proud and friendly owner will escort you in as he makes promises of serving the best coffee in town. He’ll beam as he motions towards his New York Times write-ups in the front window as proof. Score a sidewalk seat for prime people-watching and order the kaya toast and eggs. You’ll get a stack of toast cut into neat squares with a bowl of soft-boiled eggs and a side of kaya jam, a mix of sugar, coconut milk, eggs, pandan and butter. Be sure to order a cup of coffee to avoid side glances from the owner, and really, the super rich brew with distant notes of mocha is just as good as he says. On the walk back through town, take the shortcut through Duxton Road, a quaint, shaded, block with classic architecture and small shops and restaurants. Relish the quiet moments as the businesses open up for the day. 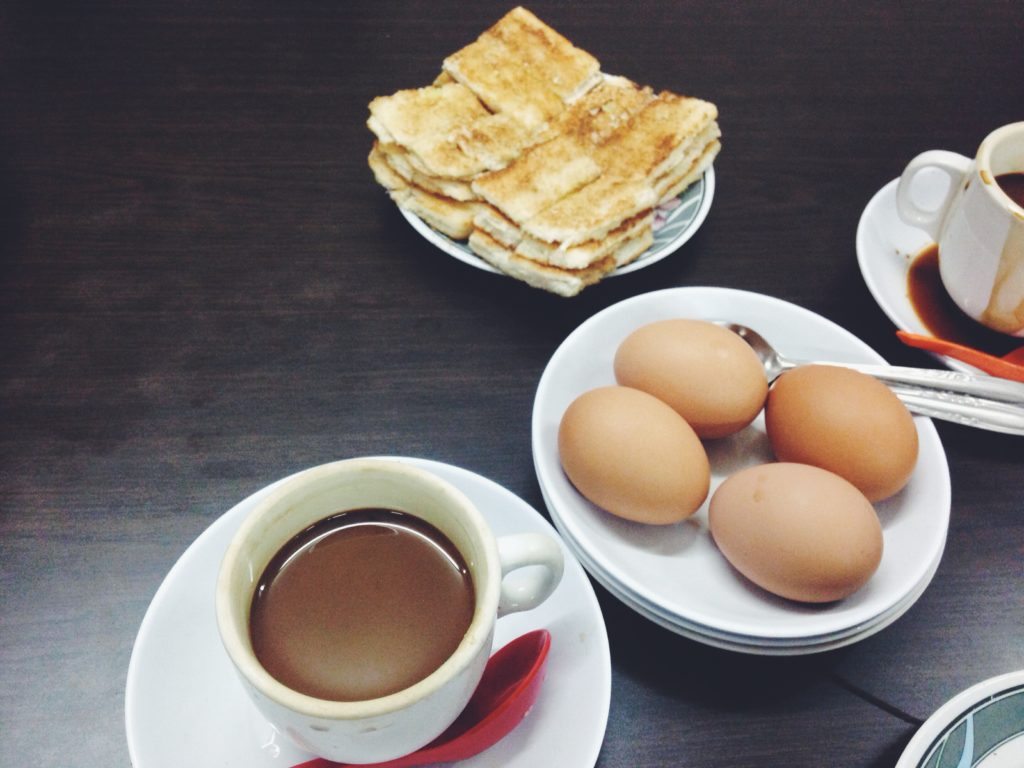 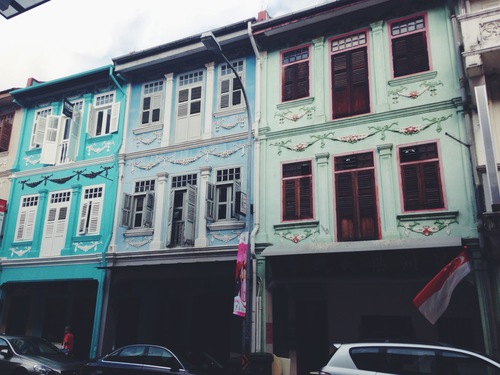 As you ready yourself for a day of seeing the town, make a quick stop at the Singapore City Gallery, operated by the Urban Redevelopment Authority with a mission to promote land use planning and conservation, while maintaining a partnership with the community. The City Gallery’s exhibits detail Singapore’s fascinating past, present and future. Narrated photo montages tell of its origins, while mini models depict how the once small island expanded to, quite literally, new heights. Proposed plans show what else is on the rise and large models of classic buildings tell the city’s story from a traditional architectural stance. In a city where you’re often left feeling small surrounded by such towering buildings, you’re the one above the clouds looking out over the metropolis at City Gallery. By checking out the city’s blueprint before you explore, you’ll take note of where neighborhoods begin and end and where cultural hubs take habitat. The kaya toast will hold you over for a while, but you may start to feel a light stomach rumble shortly after. A short stroll from the Singapore City Gallery will land you in Chinatown, a bright area with Hindu and Buddhist temples next door to Mosques. Hop around, notice the traditional architecture, sit in on a service, and get lost in a traditional Chinese medicine shop. When the hunger really starts to call, head over to Chinatown’s Maxwell hawker center. Opened in the late ‘50s as a way to bring unhygienic street food vendors indoors to monitor their preparation practices, hawker centers are pleasant open-air, food court-esque eateries that house the city’s local Malay, Chinese and Indian cuisines all under one roof. They can be found in neighborhoods all over the city, but Maxwell is a local favorite, famed for Anthony Bourdain’s visit in 2011. Grab a table and make your rounds. Be sure to pick up a variety of eats–for a taste of Malaysian, try popiah; for Chinese cuisine, go for the xiao long bao; for Indian, order idli, and for Singapore’s cultural blend of Chinese and Malay–Peranakan—the choice is nyonya dumplings. Check out the “hawker center” food guide that complements this article. Head to the nearest SMRT metro station and take the Northeast line to Little India. Almost immediately, you’ll be taken aback by the array of colors in this cheery neighborhood. Bright orange flowers hang from sidewalk stands, where fragrant piles of curry and saffron are on sale. Rows of buildings, dripped in different shades of purple, green and yellow, resemble rainbows. Make your way to Little India’s hawker center, Tekka Centre, where the color selection you’ll find is on fabric. Clothing vendors at the back of Tekka Centre sell intricately beaded and embroidered garbs straight from India. Have fun playing dress up, and with a bit of haggling, you can score incredibly unique pieces for a steal. 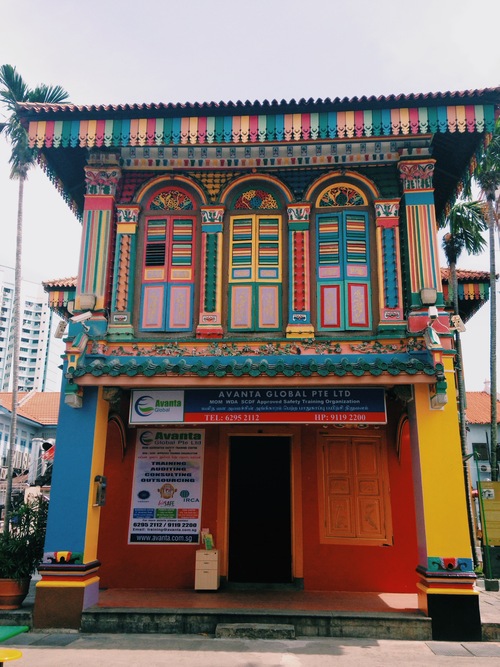 Take a 15-minute walk from Little India to Tyrwhitt Road, an up and coming area for Singapore’s young and artsy set. There, you’ll find Chye Seng Huat Hardware, a modern coffee-shop still bearing the facade of the hardware store it once was. If you don’t know where to look, you may miss it. Pop in the side entrance, where smartly dressed patrons will be typing away on their laptops wait for expertly crafted cappuccinos and flat whites. Coffee is an art form at CSHH, so any drink is fair game, but you’d be remiss not to order a glass of Nitro Black Matter, the shop’s signature brew. Served from a nitrogen tap, it resembles a glass of Guiness, and with its light taste and slight effervescence, it vaguely tastes like one, too, but be forewarned, it packs a punch. While you sip, pick up the free city magazines on display with titles like Juice and Noisefeed. They’ll hip you to any cultural events in the city, and if you’re lucky, there may be an art show or film screening that evening. When you’re finished sipping coffee and flipping pages, head upstairs to the boutique, The General, to browse accessories, fragrances and grooming products crafted by local artisans. A few stops on the East West line will land you in Tiong Bahru. It’s a chill area reminiscent of South Beach Miami with its towering palm trees and art deco architecture. There’s no shortage of cool coffee shops and boutiques to browse, but the local Tiong Bahru fave, BooksActually, is the type of place you get lost in. Beside classic names in literature, you’ll find works from young, experimental Singaporean writers hinting at the city’s shift to all things fresh and artistic. At the back of the shop are boxes and bookcases filled with antiques and found items, where you’re sure to find something of intrigue–think Spice Girls and Hanson CDs, vintage snapshots of Singaporean families, jumbo bottles of Vueve Clicquot and random collections of matches. Catching the sunset at the Marina Bay Sands is a tourist expectation. Most visitors will drop $15 to catch the view from a special glassed-in observation deck. Those in the know, however, forgo a fee and secure a spot at the famed Ku De Ta rooftop bar for an equally breathtaking view. Dress the part and you’ll be ushered through the red ropes and whisked up to the 57th floor. It’s a dimly lit space with chill house beats on blast, and the bar’s specialty cocktails are undeniable. The menu, divided into sections based on flavor profile, makes it easier for you to choose from the extensive selection. There are savory options like the “lady marmalade,” made with gin, cointreau and blackberry marmalade, and fruity choices like the “lady be mine,” crafted from vodka, lychee and rose water. The stand-out, though, is the “rum and citron sour.” It’s a near science-project blend of rum, aperol, cinnamon syrup, honey citron marmalade and egg white. Singapore is all about harmony, a peaceful coexistence of cultures, authenticity and nouveau chic. After a day of local eats, continue with a high-end evening of dinner at the Marina Bay Sands. Just downstairs from Ku De Ta, you’ll find world class dining from celebrity chefs like Wolfgang Puck, Mario Batali and Tetsuya Wakuda. Take your pick from Chinese, American, French, Indian or Italian. The options run the delicious gamut.