What does it take to face famed chef Gordon Ramsey week after week as he critiques your culinary skills on national television? Travel Noire spoke with some of the contestants who are up for the challenge on the 9th season of MasterChef to learn more about how they took their skills from their home kitchen to the small screen. Ashley (@enviebymincey) tells Travel Noire how she found the courage to leave behind a promising career in teaching to pursue her culinary aspirations.

Travel Noire: When did you know you wanted a career in food?

Ashley: I had just graduated from grad school with my masters in World Language Education. I already I loved languages and traveling was where that came from. As soon as I started my job, I started cooking more as a form of therapy. I was already cooking for my friends in grad school and I started making a transition into cook-offs, online competitions and recipe competitions which required me to cook more days out of the week and on a more serious level. I knew after my first full year of teaching that I probably should look into something more solid in the cooking world.

By the end of my second year of teaching, I knew in my heart that the culinary world was calling me. I couldn’t see a way out. I had just spent all of this time and money going to grad school getting my masters, and by the end of the third year, I just made the decision to leave, figure it out and find my way. 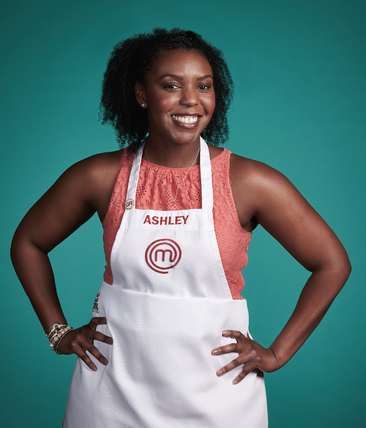 Travel Noire: Did the people around you support your transition to the culinary world?

Ashley: It wasn’t a lot. Probably less than five people. Honestly, it was my boyfriend and my best friend who believed in me and stayed up really late with me recipe developing and bouncing ideas off of them. Two people, three including myself, because I had to be the force of that. It was wild because I didn’t know if I was going to become a chef, or a food photographer, or a blogger, I just knew that my heart was in the culinary industry.

RELATED: Road To MasterChef: Shanika’s Mom Taught Her To Have Fun With Food

Travel Noire: How has travel inspired your approach to cooking on MasterChef?

Ashley: I told the judges on MasterChef before I got my apron that my culinary dream was to be an international restaurateur. That’s why I’m such a huge advocate for traveling and such a huge advocate for food globalization and going out and seeing a new part of the world that you have stereotypes about, or that you think is incredible and it’s the opposite. Just go and see it!

It’s really difficult because my family doesn’t do a lot of traveling and I’m really an oddball. Traveling impacts how I cook and it impacts my rapport with other citizens. Getting to know more global citizens has shaped the way that I am as a person, it has shaped how I cook on the show because I’m always talking about something global. I’m always an advocate for travel and how it can literally change your life.

Travel Noire: What’s your favorite food city in the world?

Ashley: New York, New York, New York. That is my city. My best friend is from New York and she knows that when I come, have a one-on-one conversation with your stomach. We’ll go to eight new restaurants and I’ll order two plates at a time. I love New York. To me, it’s a food mecca.

I just left San Francisco not to long ago and it is incredible. I didn’t think anything could come close to New York, but if there has to be a number two, it has to be San Francisco.