South African Black Twitter has spoken and it has a few choice words for William Chandler, a white South African who has been a senior pilot for South African Airways (SAA) for 20 years without a legitimate airline transport pilot license (ATPL). Chandler has flown thousands of miles since he began his career in 1994 using fraudulent papers and somehow bypassing annual requirements including medical and physical examinations and technical re-evaluations enforced by SAA and the aviation certification board.

“When faced with reportable incidents such as this one, the airline undertakes investigations to gather relevant details, establish facts and make determination on what course of action must be embarked on, whether remedial, disciplinary or otherwise. This process forms part of our standard operating procedures,” SAA spokesperson Tlali Tlali told the Mail & Guardian.

Chandler resigned this year after his forgery was discovered following an investigation into a “reportable incident” on a flight he piloted, the airline said. Little is known about the incident as it seems to have been kept under wraps for unknown reasons.

According to Mail & Guardian, airline pilots are among the highest-paid employees at SAA, with annual salaries ranging between R900 000, or about $63K, a year for the most junior pilots to as much as R6-million, or about $420K, for the most senior captains.

In a country fraught with racial tensions, South African Black Twitter does not seem surprised by this incident in a country where many claim “white is always right.” However, they are making their frustrations known at how often white South African’s get away with injustices due purely to their whiteness.

Many have voiced their concerns from flight safety issues, to fraud, to racial inequities by the hands of an overtly biased system. Here are just a few of the online reactions on Twitter to Chandler’s forgery. 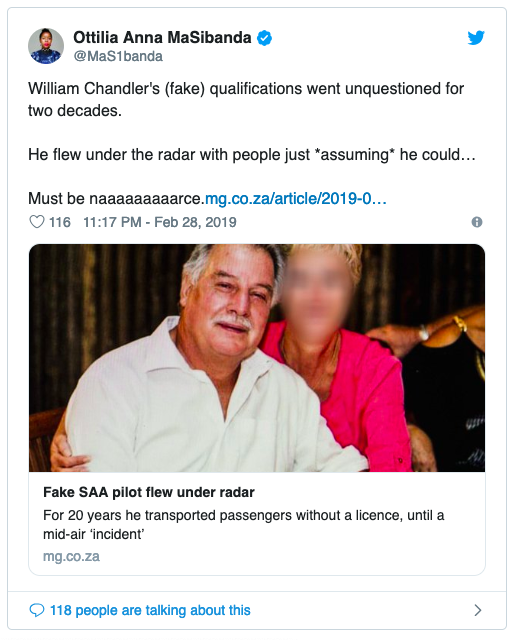