Traveling can work up quite the appetite. Most eat before they hit the airport, and others spend tons of money on fast food in the terminals. Then, there are those people brave enough to eat the food that is served directly on the airplane. The type of food provided varies given the airline and how far you’re traveling.

On Twitter, TN wanted to see which followers had the guts to eat airplane food that the movies make look so unappetizing. From small bags of peanuts to sirloin steaks, every travelers’ experience is different.

Question of the day: Do you eat airplane food? pic.twitter.com/SzXhAHrGg1

People are picky about their food, rightfully so. It was no surprise when some travelers said its a simple case that would depend on what the food looks like. Would you eat something that looks questionable?

When you have specific taste buds, there is a certain standard you keep when it comes to what you’ll eat. Now for those that haven’t had the pleasure, or the funds, to fly first class, you do know that there is a different type of service at the front of the plane. That also means passengers in seat 1A get more than a party cup of soda and a bag of dry pretzels. One passenger was living her best life on a flight from Dallas to Hong Kong when she had a meal that would put a restaurant out of business. International flights are known for serving top of the line food for their guests. Passengers on specific airlines like Emirates and Air Italia rave about their food choices. Sometimes you’ll be served a five-course meal with a wine selection, who could pass up on that?

Travelers have raved about how far airplane food has come. Over the years, food has gotten much better and caters to passengers with different dietary needs. Nowadays, some people eat gluten-free food. You can get a vegan meal when you request it now. For those that don’t feel the need to sit in first class or care to eat a fulfilling meal, of course, snacks are still available. Be careful though, if you snooze, you lose. Some passengers have clever ways of not missing out. 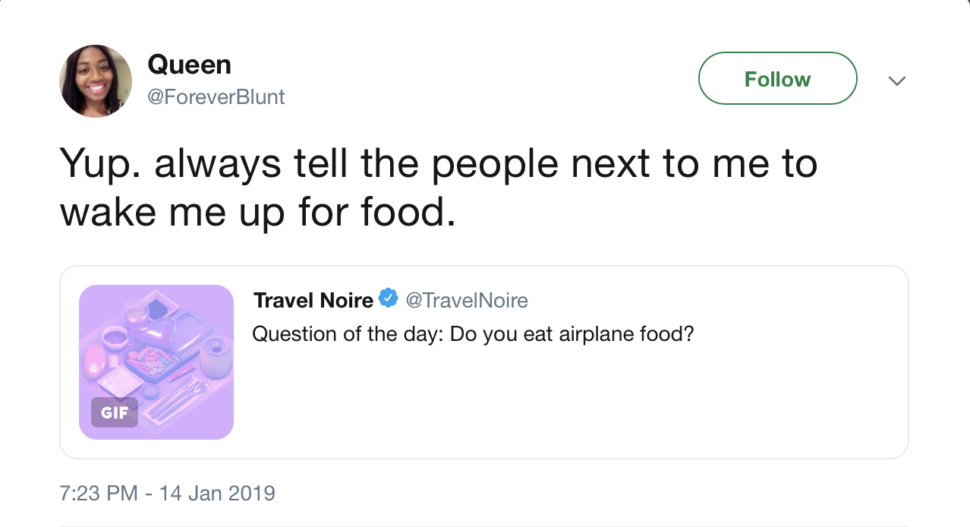 So it looks like regardless of what people say, it doesn’t look like travelers have any issue with eating airplane food. Be sure to bring your appetites!