There are some places in the world that are life-changing, and Egypt is one of them.  From its pharaonic history, architecture, and country, Egypt will be one of the best travel decisions you will make.

Even though the country has been under a great deal of scrutiny in recent years for general instability in the region, Cairo has remained safe.

Egypt’s capital, Cairo is home to some of the most fascinating wonders (official and unofficial) of the world. There a ton of options for travelers that includes the famed of Pyramids at Giza (just outside of Cairo), the Egyptian Museum, and the Al-Azhar Mosque. If you’re looking to shop, then head to Khan Al-Khalili Bazaar for spices, jewelry, tea and more.

You can fly to Cairo as early as mid-September from the Washington D.C. area for as low as $660, according to Google Fights.  The cheapest options require a two-week stay and prices don’t look they will increase until January 2019.

There’s not much of a price change if you’re traveling from New York between October and December if you plan to book a two-week stay. 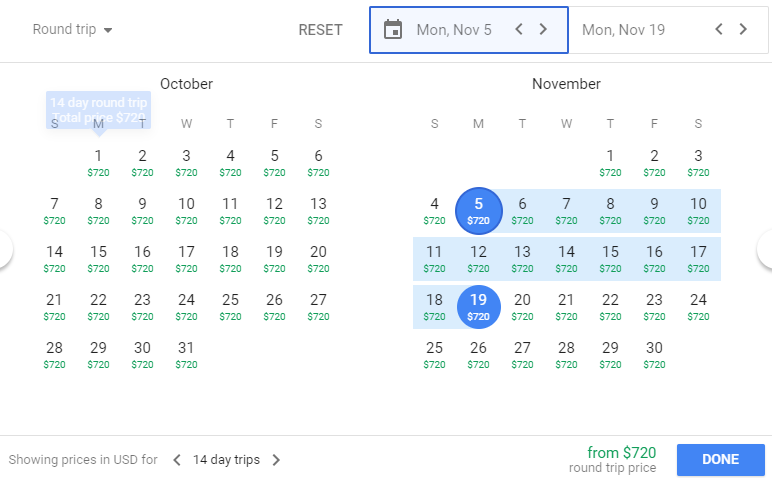 The cheapest time to travel to Cairo from Chicago is at the end of October for a two-week stay into the beginning of November. According to Google Flights, a round-trip flight will costs approximately $609.

There area few options from Los Angeles in November for a two-week stay for roughly $740.

So here are a few other things to keep in mind when planning a trip to Cairo:

You will get more for your money in Cairo.  As of right now, 1 U.S. dollar converts to at least 17 Egyptian pounds.  The average meal will cost 5 Egyptian Pounds.

Stay up-to-date with the latest travel advisories in Egypt by following the U.S. Department of State’s Bureau of Consular Affairs.