“The Faroe Islands… I have no clue where that is!”

This was the first thought that crossed my mind as I looked through the itinerary of the small luxury cruise ship where I work. When you have a job that is floating around various areas of the world for months at a time, you try to take advantage of going out as much as you can. This is especially true when you find yourself going to a place that is out of the way and somewhat isolated. It’s like having the opportunity to visit one of the many tiny islands somewhere in the South Pacific. However, instead of the clear blue waters and tropical weather that most people envision when they think of islands, there are white skies, fog, and puffins. 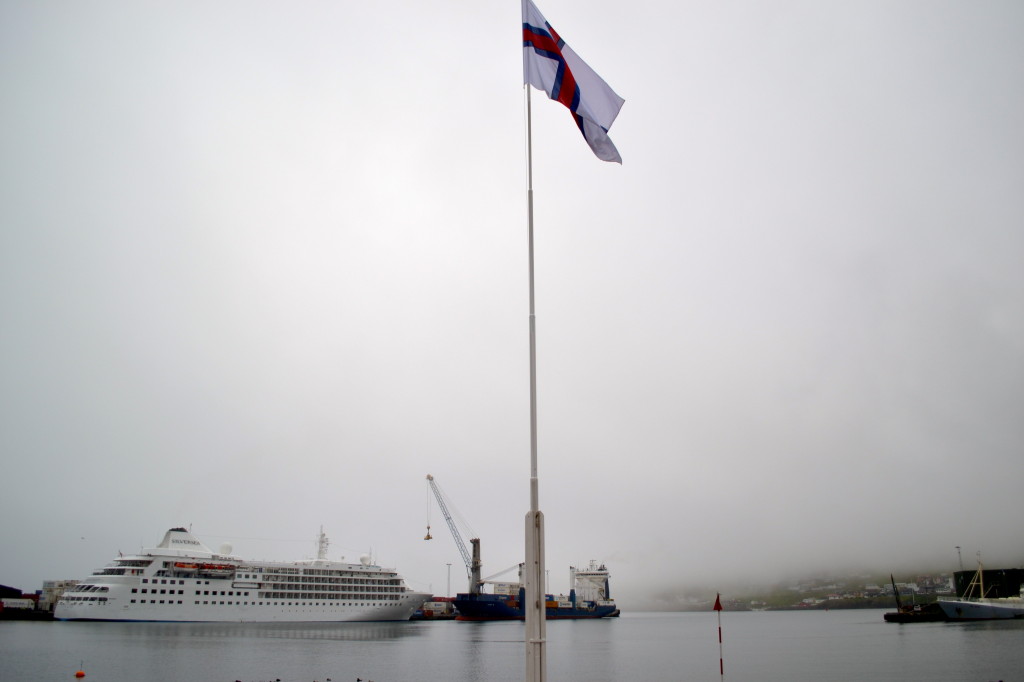 This archipelago of 18 major islands is situated northwest of Scotland’s Orkney Islands and about 200 kilometers west of Norway. The best way I can describe the Faroese is by comparing it to a cross between Denmark and Norway with a touch of Iceland. I’m not just saying this because it was in the brochure that I picked up in the tourism office, but because historically, there are many ties between the three countries.
For many centuries the Faroe Islands was a very small trading pit stop in the North Atlantic beginning with the Vikings, the Danish, and the Norwegians. All have left their influence and still have ties with the island nation. The official language is Faroese, a Nordic language, which has roots from Old West Norse as well as Celtic connections. The currency used is the Danish kroner and even the flag is similar in design to Norway and Iceland. All of this makes for a Scandinavian melting pot.
How to Get Here:
On the map, the Faroe Islands seem to be a perfect midpoint between the northern Scottish Isles, Iceland, and Norway. Tourism is beginning to pick up on the islands with many visitors from Denmark and those on their way to Iceland. The few backpackers I saw while walking around was proof of this. For the budget traveler, the Faroe’s location makes for a very expensive trip so it’s much smarter to include it in your itinerary if you’re traveling around Scandinavia to begin with. You’ll have better transportation options this way, as there are many flights and ferries with connections through the islands. One in particular is Smyril Lines, which goes back and forth between Iceland and Denmark. There are also daily direct flights from Copenhagen. Things to See
Torshavn is the capital and largest town of all the islands as well as the seat of government. The old town is where you will find the tinganes, which is Faroese for “parliament point”. These government buildings date back to the 16th and 17th century and traditionally have turf roofs. Not far from the old town, past and present mingle with cafes tucked here and there. A stroll through the quiet fishing town will reveal Torshavn’s modernity. Boutiques selling fashion forward knitwear, a sushi restaurant, burger joints, record shops and an art school, have the feel of a city. Yet, even when the streets are bustling it is somewhat subdued. For the Foodies and Art Lovers
To all vegetarians and vegans that may be reading this, I would pack some extra granola bars if you think that potatoes and rutabagas won’t suffice. With the exception of milk and yogurt, most of the food you’ll find in the supermarkets is imported. Faroese cuisine, like many of the North Atlantic countries, is based off of seafood with local delicacies such as whale meat and puffins mixed in. If you’re not familiar with puffins… Google it. They are little black and white seabirds with large multicolored beaks, but from what I’ve heard, are delicious with a gamey flavor. If dried fish and adorable birds are too much you can always go for the fish and chips, a leftover gift from the British that the Faroese are fond of.
The climate may be chilly and the winters may be mild, but there are many things to do in what is considered one of the cloudiest places in the world. There are many art galleries and museums with works from mostly local Faroese artists and those living abroad. Listasavn Føroya is the national museum that houses contemporary works and exhibitions as well as traditional Faroese art focusing on landscape and nature. Another major attraction is the Torshavn Jazz Festival held in August and features many prominent international acts. With a rich and unique culture, the Faroe Islands is definitely a bucket list type of place. It’s worth it to go for a short weekend if you’re traveling around the Nordic countries or wanting to add another experience to the pile. Once here, you will forever own the rights to: “Oh that place? Yeah… I’ve been there. They have like twice as many sheep than people.”