Flight Deal: United Has Round-Trip Tickets To Rome For $399

It’s no secret that Rome is a popular destination among tourists. If you’re traveling during peak times, it can make for a beautiful yet cramped experience.

If you don’t mind cooler temperatures, however, then now is the time to book a flight to Rome.

The city doesn’t lose its charm when it’s colder.  In fact, you have the opportunity to soak in its beauty even more.

Lines to popular places like the Colosseum will disappear, you can enjoy comfort foods like pasta and chocolate in the winter, and you will have more money to spend as you shop in time for the holiday.

Speaking of holidays, the city will be decorated in Christmas lights, something you just can’t experience during Rome’s peak tourist season.

Right now, United Airlines has great deals to Rome for travel as early as December.

Here’s how and where to book:

The best airfares to Rome are from San Francisco at the beginning of December. There are multiple options on United and its sister companies, according to Google Flights, all under $500 for a round-trip.

According to Google Flights, prices to Rome from Atlanta are priced $547 lower than normal. 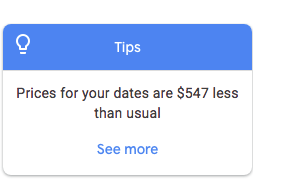 United has a flight for a vacation priced at $499 round-trip. There is a layover stop in Newark.

There are two options from Miami that are priced under $500 for a round-trip ticket in January.

The first includes a short layover in Zurich on Swiss Air. The second option is a six-hour layover in Munich, Germany on Lufthansa.

The cheapest option means two layovers in New Jersey and Zurich for flights as early as December.   The ticket through United is $497 round-trip. Dec. 4 through Dec. 12.