Lyon is France’s second-largest city, but it’s often overshadowed by Paris. With museums, cafes and famous attractions, like the Eiffel Tower and The Louvre, The City of Lights is one place that never gets old.

While smaller in size, Lyon is a place often overlooked by tourists but offers sophistication and a variety of activities like France’s more popular cities, Paris and Nice. Located just 288 miles south of Paris, Lyon is a city that should not be ignored.

With more than 2,000 restaurants, Lyon is considered the food capital of France. Eat your heart out with these deals below.

The best travel deal from Philadelphia offers a flight and a train ride for $496 round-trip this November. You will arrive at Charles de Gaulle Airport in Paris and then take a train to Gare de Lyon-Part-Dieu station, according to Google Flights.

Any flight to Europe under $600 round-trip from Dallas is considered a good deal. There are two options this November from Dallas to Lyon that includes two transfers under $500.  The first transfer is in Atlanta followed by another once you arrive at Charles de Gaulle Airport in Paris.  A train will then transfer you to Lyon. Plug in travel dates Nov. 28 to Dec. 11 in Google Flights to discover the deal.

There are a few options this November for passengers thinking of heading to Lyon from New York. The cheapest option involves travel by plane and train, according to Google Flights. 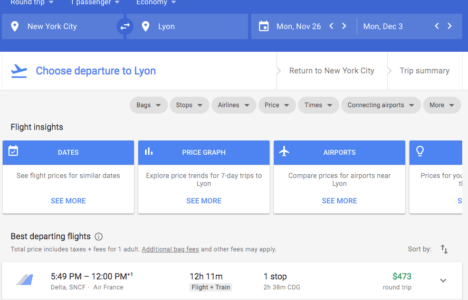 Like New York City, Google Flights has various options for cheap plane tickets to Lyon at the end of November. Below are the best prices, according to Google Flights. A trip to Lyon is slightly higher from Los Angeles compared to other cities, but still under $600 for a round-trip.  Play with dates at the end of November until mid-December in Google Flights for the best deals.