As we close out Pride Month 2021, we wanted to make you aware of a few more important Black LGBTQ+ icons and figures who were important to the fight. While many were public with their sexuality, others may surprise you. Either way, all of them have contributed to Black culture as a whole at some point, and they deserve their flowers. Due to the continued racism Josephine faced in the US, she eventually renounced her US citizenship and became a naturalized French citizen. She assisted in the French Resistance efforts against the Nazis in WWII by acting as a spy. Josephine was awarded the Croix de Guerre by the French military and was made a member of the Legion of Honor by General Charles de Gaulle.

Throughout her life, Josephine always maintained relationships that transcended the boundaries of nationality, race and gender.

When she died in 1975, Josephine was the only American-born woman to receive full French military honors at her funeral. Born in Alabama in 1944, Angela Davis is a political rights activist, academic and author. She was famously a member of the Communist Party USA as well as an affiliate of the Black Panther Party.

Over her multi-decade career Angela has published ten books, and has inspired millions around the world through her work as a professor and activist, advocating gender equality, prison reform and civil rights. Her work explores the themes of class, race, feminism and the US prison system.

Angela is currently a professor at the University of California in Santa Cruz where she teaches Feminism, African American studies and social consciousness, among other things. She was named as one of Time Magazine’s ‘Most Influential People of 2020’.

Courtesy of Intersex Campaign For Equality

Julius Kaggwa is an award-winning Ugandan intersex and transgender activist who campaigns to dispel the stigmas surrounding the intersex community and to prevent the mutilation of intersex infants. He is the executive director the organization Support Initiative for People with Atypical Sex Development.

In 2010, Julius was a joint winner of the Human Rights First Award along with the Hungarian, Roma activist, Viktória Mohácsi. In 2011 Julius won the Human Rights Defenders Award, as given to him by the U.S. Department of State. 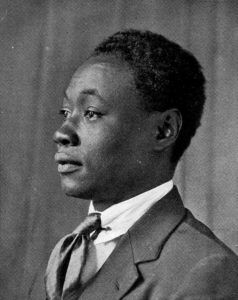 Claude McKay was a Jamaican writer and poet and a seminal figure in the Harlem Renaissance of the 1920s. He was born in Jamaica in 1889 into a family of eight children. McKay wrote five novels as well as collections of poetry— one of his most famous works is the 1919 poem “If We Must Die” which encourages persecuted groups to fight for themselves.

Growing up in Jamaica, Claude enjoyed reading Shakespeare and began writing poetry as a child. In 1912, aged 23, he published his first book of poems entitled ‘Songs of Jamaica’, the first poems to be published in Jamaican Patois. That same year he travelled to the US to study at Tuskegee University, and was shocked at the segregation and racism he encountered in Southern America.

During his lifetime Claude traveled the world, spending time in the UK, Russia, France and Morocco among many other countries. Claude McKay died in 1948, aged 58.

In 1977 the Jamaican government named him the national poet, and he was posthumously awarded the Order of Jamaica, part of the prestigious Jamaican Honours system. Langston Hughes was an American writer, activist and poet born in 1901. He was a leading figure in the Harlem Renaissance, and was also vocal in the civil rights movement from the 1940s to 1960s.

In 1925, he began working as an assistant to the historian Carter G. Woodson who founded Negro History Week, the pre-cursor to Black History Month. However, Langston discontinued this role in favor of prioritizing his writing and his poetry.

Langston’s signature poem ‘The Negro Speaks Of Rivers’ was first published in the NAACP magazine ‘The Crisis’ in 1921. His work was hugely influential during the Harlem Renaissance of the 1920s. Through his work he highlighted the experiences of working-class African Americans, their triumphs and their struggles. He encouraged Black communities to take pride in their many diverse identities and cultures.

During his lifetime Langston traveled to Europe, West Africa, the Soviet Union and the Caribbean, experiences which impacted him greatly. Throughout his literary career he received international acclaim and inspired Black writers across the world, including Nicolás Guillén, the Cuban poet as well as Aimé Césaire, Léopold Sédar Senghor, and Léon Damas, the founders of the Negritude movement in France and the French-speaking world.

Langston died aged 66 in 1967 following complications related to prostate cancer. His ashes are interred in the Schomburg Center for Research in Black Culture, established by the renowned Puerto Rican historian Arturo Alfonso Schomburg in 1926.