On any given day, there’s a good chance that you can find a deal to an international destination for a price so affordable that it almost sounds like an error. If it seems like flights overall are cheaper than they have been in the past, especially for travel abroad, you can thank the increase in popularity of budget airlines like Spirit, Southwest and Norwegian for driving down the price of airfare and for forcing legacy carriers like Delta, United and American to develop their own basic economy seat classifications.

WOW air is one of the airlines that’s known for their no-frills, affordable international flights, but if you’re curious about booking one of those $99 deals, here’s what you should know about the basic economy ticket called WOW basic.

Few airlines can compete with the base fares on WOW air. It’s not uncommon to see flights departing US cities like New York City, Chicago, Los Angeles and Boston to European hot spots like Paris, London and Barcelona start at $99, but keep in mind that the return flight is often more than twice the price of the departure. One October WOW basic flight from Chicago to Barcelona, for example, costs $129 for the departure flight and $249.99 for the flight home. The total comes to $378.99, but that fare includes just one personal item and not much else. 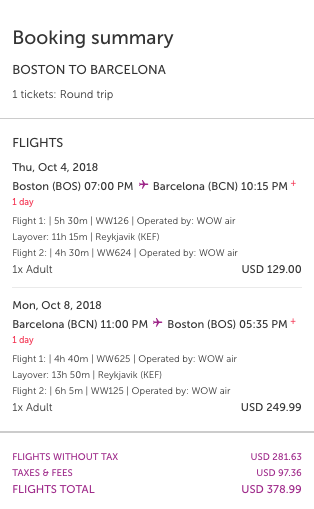 RELATED: Here’s How To Tell If A Cheap Flight Is The Real Deal

WOW’s basic economy flights allow for just one personal item (up to a maximum of 17x13x10 in and 22 lbs in size) that can be stored under the seat in front of yours. Depending on when you pay for your checked and carry-on bags and where and when you are traveling, carry-on bags can range from $44.99-$99.99 and checked bags range from $54.99-$99.99 per guest and per bag. The prices climb even higher for oversized luggage and items like golf bags and bicycles. If you know you’ll want to check a bag, do your wallet a favor and pay for it when you purchase your ticket.

If the thought of the middle seat makes you cringe, you’ll want to select your seat in advance. On the sample Chicago to Barcelona flight, the price of seat selection ranges from $6.99 for the standard seat to $49.99 for the XXL legroom seat, so if you pick your seat ahead of time, you’re looking at spending at least $28 for the cheapest seat for two legs of a round-trip.

WOW basic flight guests don’t receive meal service for those long international flights, so you’ll want to plan ahead and bring your own food and snacks or prepare to pay between $10-15 for meals in-flight. You’ll also have to pay for beverages including water, which costs $2. Some flights let you select and pay for your meal when you buy your ticket, which is the best and most cost-efficient option.

If you’re looking to save cash while seeing the world, can pack light and don’t need to make any changes to your flight, WOW basic is a suitable option for budget travel. The airline also offers WOW plus, WOW comfy and WOW premium flights that cost a lot more, but they include many of the flight features that just may be worth the extra money. You can find out more about WOW fares on the airline’s website here.