Deal Alert: Fly To Amsterdam For Less Than $500 Round-Trip

The fall just may be the most perfect travel season. The weather is pleasant in many popular destinations, the big vacation rush from the summer is dwindling down, and wait times to visit top attractions are much shorter.

One of the best places to visit in the fall is Amsterdam. Known for its historic canals and parks, there’s no better time to stroll through the capital of the Netherlands, and here’s how to embark on this journey for less than $500.

Using Skyscanner, British Airways has multiple options for trips starting at around $450 for a round-trip flight in early October.

RELATED: How To Spend 24 Hours in Rotterdam

Using Skyscanner, the cheapest time from Philadelphia to Amsterdam is in November. Icelandair has flights priced below $450 for a one-week stay in November.

Portland has deals for $540 round-trip on United Airlines in March 2019.  It’s not during the fall, but March is still considered off-season travel. Temperatures are starting to warm up so the weather will be comparable to traveling from Sept. though Nov.  The average flight to Amsterdam from Portland is $1,100 so don’t miss out on this deal. It’s never too early to book a cheap flight. 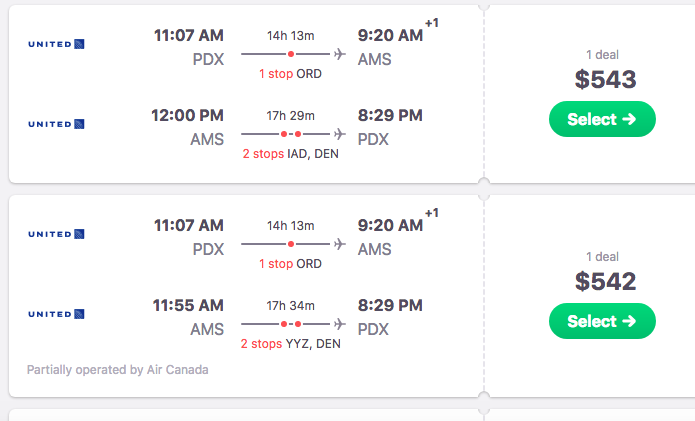 Other deals to Amsterdam this fall found on Skyscanner include round-trip flights from LAX this November for less than $450, flights from Denver for $570, and flights from Charlotte for $588.

Head to Skyscanner to find the right flight for you.

Tips & Tricks For Traveling With A Toddler