A Trip of a Lifetime

On December 24, I embarked on the journey of a lifetime. I traveled on the Jagriti Yatra, an annual 7,500 km chartered train ride that takes highly motivated young Indians, as well as a few international participants under 25 years old, on a 15-day national odyssey to meet with and learn from entrepreneurs who have developed innovative solutions to address India’s challenges. 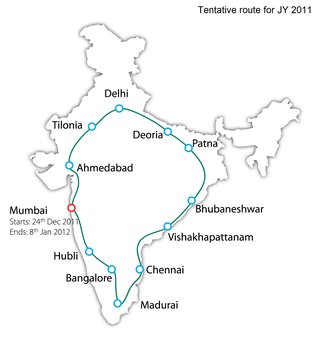 The Jagriti Yatra was an opportunity to learn without being taught, the experiences of successful social entrepreneurs like Bunker Roy of Barefoot College, Anshu Gupta of Goonj and the founding family of Aravind Eye Care. While on a panel discussion in Ahmadabad, Harish Hande, founder of Selco, offered sobering advice: “Live with the problem that you are trying to solve.” He explained that too often, so many of us—wanting to come from a place of understanding—don’t take the time to live with the issue that we want to help eradicate. This advice, similar to the wisdom we had been receiving from social entrepreneurs along the yatra, helped to shape our personal journeys, contributed to extraordinary learning, personal transformation and realistic applications to future venture ideas.

While some yatris were owners of their own enterprises, most were simply intrigued and enamored by the possibilities of becoming a part of the class of Indians transforming India through sustainable enterprise. Although many of the yatris were in STEM related fields, they expressed interest in crossing over into the social sector, stating that a major reason for selecting their field was because of parental pressure. It became clear along the yatra that while the interests of my fellow cohorts varied along an infinite spectrum, they shared the common interest of wanting to rebuild their nation and carry it forward.

The yatra was at the cornerstone of my experience in India. It opened so many doors, opportunities to travel (I traveled to Bangladesh with a yatri) and sparked the beginning of many lifelong friendships with people living in India and abroad. Through this yatra, I learned that India was much more than it’s cities; it is a vast and sprawling countryside. I learned more about the power of our generation by observing my Indian cohorts working to create change in the midst of crippling frustrations like corruption and poverty. The way that India changes over the next fifty years will change the world.  This journey taught me more than I could ever hope to capture in any paper, book or article. The friendships, relationships and partnerships that have been cultivated keep me excited about the future of India.