5 Vegan-Friendly Cuisines Around the World

When it comes to vegan travel, no two countries are alike. In some destinations, vegan and vegetarian dining is code for wealthy, first-world folks with money to spend. In other places, the idea is so foreign that you find yourself famished at the end of the day, puzzled by how hard it is to find a decent meal and binging on Clif bars in your hotel room. Having experienced both ends of the spectrum in the past seven years, here are my favorite vegan-friendly cuisines beyond the obviously popular foods of India and China. In each of them, I’ve found easily accessible and affordable foods that were authentically native to the region and not just vegan reinventions. So, pack your bags, bring your appetite, and get ready to eat! This unique cuisine is a full-sensory experience. The heavenly aromas, colorful presentation, and amazing tastes are wrapped in injera, a spongy bread made of fermented teff, and then consumed by the handful. Beyanetu, the vegan platter, is what Ethiopian Orthodox Christians generally feast on at the end of a fasting day. On Wednesdays and Fridays or during special seasons of fasting, these meals are widely available in Ethiopia. If you happen to be in Addis Ababa, Itegue Taitu Hotel hosts a daily vegan lunch buffet that is well-worth the value and free Wi-Fi.

In spite of my Jamaican citizenship, I must admit that I’m much better fed while in Trinidad. The collaboration of Caribbean and Indian flavors is tastiest in Trinidad. Doubles, a popular street food enjoyed by many, is my favorite vegan treat. Stewed chickpeas spread between fried dough, topped with sweet chutney and pepper sauce is quickly wrapped in wax paper for less than a dollar a piece. It’s so good that people will literally stand at the side of the road eating it, unable to wait until they get home. Additionally, you can find a wide variety of bean, legume, and vegetable dishes like dhal (split peas), channa (chickpeas), and roti bread– all of which are reminiscent of their Indian past but unique in their Caribbean branding. The Levant has exported culinary delights that have become almost staple in a vegan diet. Chickpea hummus spread, baba ghanoush eggplant dip, tabbouleh and fatoush salads, and the occasionally-vegan falafel are the MVPs of the region. But let’s not forget Egypt’s contribution: foul moudammas (mashed and stewed fava beans), kosh’ari (lentils, pasta, and rice topped with spicy tomato sauce and fried onions), and molokhia (stewed jute leaves). Among other points of strife, there is an ongoing debate about which country has exclusive rights to each dish or prepares it best. So, for the sake of peace, keep your opinions to yourself. 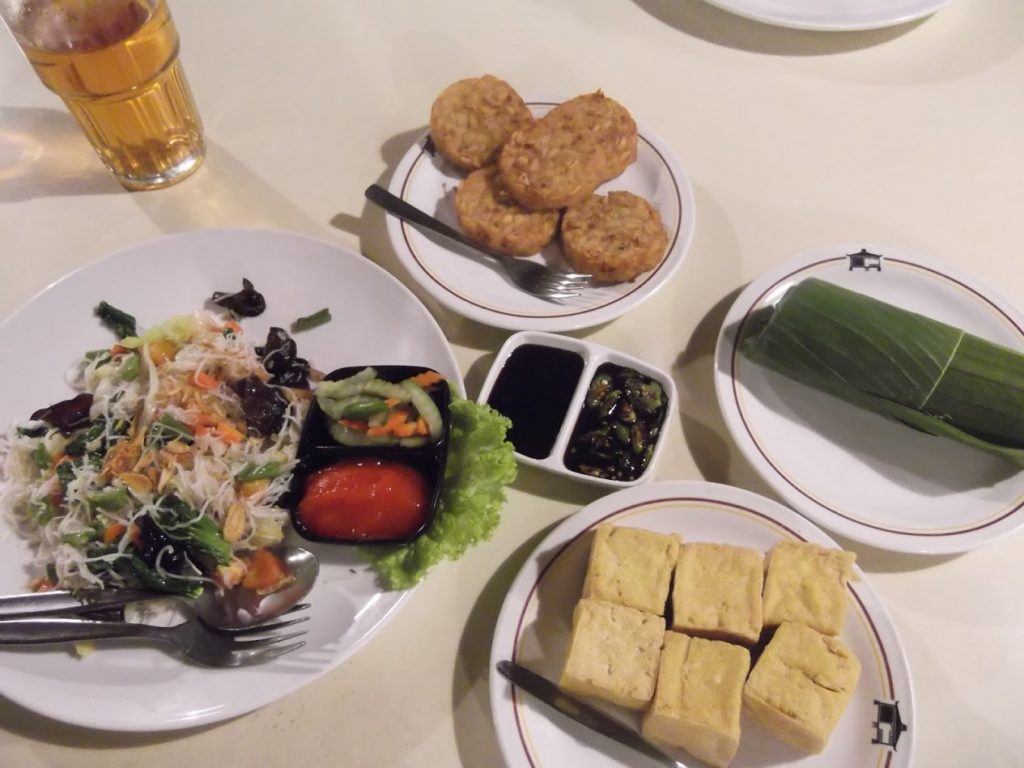 One of the archipelago’s most celebrated gifts to the vegan community is tempeh. Yes, China has given us tofu served in all of its varied textures and form, but Indonesia took the same soybean and developed a fermented and nutty treat that can easily be found all over the country. Alongside, vegan Nasi Goreng fried rice or egg-less Gadu Gadu vegetable salad, fried tofu or tempeh make a delicious meal. As is typical of the region, some sauces might contain shrimp paste, so inquire first.

Discovering this side of Swahili cuisine was one of the best mistakes I ever made. My family and I were driving along the beaches of Oman and needed a break for lunch. Unbeknownst to us, we were in a Zanzibari Omani community and were pleasantly surprised by the abundant options of bean and vegetable dishes stewed in coconut milk like maharage (red beans), lubia (pigeon peas), and mhogo (cassava). I’m not sure why this delicious cuisine hasn’t spread much further than East Africa and Oman but I hope it does soon.