California has no shortage of desirable destinations for travelers to visit, with glitzy Los Angeles, laidback San Diego and scenic Orange County to the south, techie-meets-hip San Francisco to the north and the wine regions of Napa and Sonoma in the middle of the state. With so much competition, San Jose can sometimes get lost in the mix, even though it’s the 3rd most populated city in California and the 10th most populated city in the country. If you’re short on time but still want to check out the Bay Area city, we’ll tell you how to get the most out of 24 hours in San Jose.

Getting to San Jose

If you’re flying to San Jose from another state, you’ll likely fly through San Jose International Airport, but those coming from Southern California have another, quicker option. If you’re coming from the Los Angeles-area, consider booking with JetSuiteX, a private charter airline which recently debuted routes between the Hollywood Burbank Airport and Atlantic Aviation SJC. For $129, you can book a one-way flight on JestSuiteX, which sounds pricey at first, but passengers avoid security and can check in 15 minutes before the flight is set to depart! Your fare includes free checked bags, complimentary snacks, beer and wine and free Wi-Fi, so for business travel between Los Angeles and San Jose, it doesn’t get much better

San Jose is considered the “Heart of Silicon Valley” so its fitting that your first stop should be at the city’s Tech Museum of Innovation. The museum has everything from an IMAX movie theatre and VR experiences to an earthquake simulator and an interactive experience about Internet safety, so expect education and entertainment to go hand-in-hand.

Located steps away from the Tech Museum, the San Jose Museum of Art is a mid-size museum showcasing contemporary works from many artists working today. The museum has more than 2,500 pieces in its permanent collection, but it’s in the rotating exhibits that often highlight internationally acclaimed and local artists where the museum truly excels. San Pedro Square Market in Downtown San Jose has an eatery for whatever cuisine you’re craving. Try tacos at Loteria Taco Bar, grab a slice at Pizza Bocca Lupo or go for linguine at Pasta Fresca, and be sure to enjoy your goodies from the market, which is a hotspot for locals working nearby, from the comfort of the outdoor seating area.

San Jose State Universtiy honored alumni and Olympic heroes Tommie Smith and John Carlos with a statue depicting their iconic raised fist pose from the 1968 games. The statue is located on the school’s campus next to Clark Hall and Tower Hall in Washington Square and is a hidden gem few visitors know about. 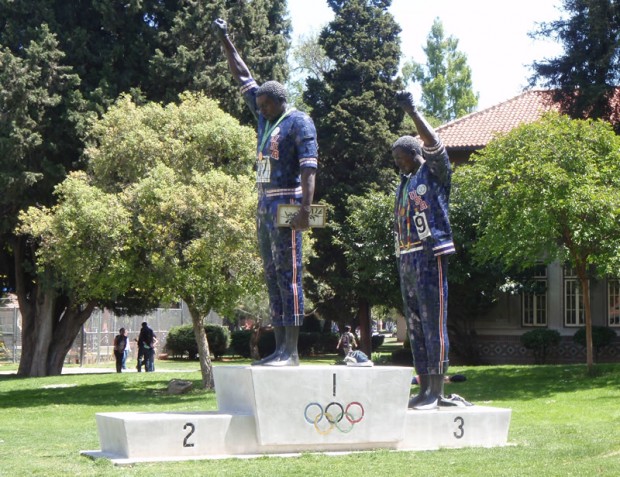 Take a break and enjoy some downtime at Cesar Chavez Park, a tiny plot of land right in the middle of downtown that’s ideal for people watching, reading and relaxing. After the park, head to the hotel (we recommend staying at The Westin San Jose), to freshen up for the night ahead.

Michelin-starred Portuguese eatery Adega is one of the city’s pricer restaurants, but if you have just one night in San Jose and consider yourself a foodie, the innovative, elegant seafood-centric menu at Adega is not to be missed. Complete your tour of San Jose with a  cocktail at Cafe Stritch, a jazz bar with live music every night of the week. Expect both local acts and visiting performers to take the stage, and enjoy an Old Fashion while bringing your time in San Jose to a close.