10 Cities and Towns To Check Out In Tuscany

Italy, that massive boot in Europe, has seduced generations of travelers. As far as specific regions go, Tuscany is the stuff of legend, offering experiences for all kinds of visitors. If you want the action a major city provides, or the humility of a small village, the region has both.

If you want to step back in time by staying in a centuries’ old farmhouse, that is totally possible. Even water lovers will find something palatable here, either in Tuscany itself or along Lake Trasimeno in neighboring Umbria.

Here are ten cities and towns in Tuscany (with Umbria as a bonus) to consider for your next trip. Artists or lovers of art who want to see some of the finest works produced prior to, during, and after the Renaissance needn’t look further than Tuscany’s capital- Florence.

The city is home to Michelangelo’s David, on display at the Galleria dell’Accademia, and at 17 feet tall, the statue is mostly larger than life.

Michelangelo saw every block of stone as a sculpture waiting to be unveiled by capable hands, and he was not yet 30 when he carved David from Carrara marble. The idealized proportions and celebration of youth are clearly inspired by Ancient Roman and Greek sculpture, and it’s a wonder to behold in person.

Outside of these, check out the Uffizi Gallery and the Piazza Duomo, where you’ll find the works of numerous masters such as Donatello, Giotto, Michelangelo and others.

Take a stroll through the Boboli Gardens in the spring when flowers are just blooming, or when the crisp oranges, yellows, and reds of the autumn leaves are visible.

Interested in high-end shopping at a fraction of the price? Head over to The Mall (imaginative name, isn’t it?) a fashion outlet selling clothes from Alexander McQueen, Armani, and many others. This charming city holds fast to its medieval roots, and it was the backdrop for the James Bond film, Quantum of Solace.

According to Discover Tuscany, Siena’s name stems from Senius, the son of Remus, one of the two founders of Rome.  Legend has it that Remus and his brother Romulus were nursed by a she-wolf, and this is the emblem of Siena.

The central piazza is Il Campo, which hosts The Palio, a spirited horse race, which attracts throngs of spectators in the summer. During this event, 17 contrade (teams, basically) go toe to toe with each other: Eagle, Snail, Wave, Panther, Forest, Tortoise, Owl, Unicorn, Shell, Tower, Ram, Caterpillar, Dragon, Giraffe, Porcupine, She-Wolf and Goose.

Depending where you are in Siena, you’ll know from the colorful banners displayed which contrada (singular for contrade) will be represen ting your area.  Expect plenty of noise and fun, and consider leaving smaller children behind in case participants, spectators, or horses become rowdy.

Siena Cathedral is one of the most impressive houses of worship in the city, taking its cue from Gothic and Romanesque styles.  Feast your eyes on the decor, coupled with works by Donatello and Michelangelo (there are odes to the latter everywhere, and justly so). Referred to as “the city of 100 churches,” medieval Lucca may be in the shadow of its siblings, particularly Florence, which will always be the favorite child.

But Lucca is a pleasure to explore on foot, and as you take in its history, counter the summer heat with some delicious gelato. As an alternative to walking, you can rent a bicycle, but be sure to weave through pedestrians with care.

Lucca offers casual and fine dining options at m any price points. Restaurants serve all the expected Italian fare, from pasta to pizza (thin crust, not the thick New York slices, much less Chicago- style deep dish) and everything in between. And Italians, not unlike the French, take their wine seriously, so if the wine lists are overwhelming, don’t be shocked. Pisa is home to one of the most recognizable structures in the world- the Leaning Tower.

The tilt is due to soft, shifting soils, and while there have been stabilization concerns over the years, the tower has never collapsed. The tilt actually adds to its charm, and makes it a fun prop for photos, too.

As for other sites of interest, visit the beautiful  Cathedral of Santa Maria Assunta, the majestic, but incomplete Pisa Baptistery next to the Tower, and, for some retail therapy, the Borgo Stretto. The central square of this Etruscan city is the slightly tilted Piazza Grande, home to the Saracen Joust, vaguely similar to Siena’s Palio.

Lining the narrow streets and walkways spreading out from the Piazza, you’ll find an array of little shops selling clothes, antiques, and other wares, as well as eateries.

There is also the Arezzo Cathedral, which is tight-lipped on the outside, but has stunning interiors, especially the stained-glass windows. It can be difficult to create the illusion of depth with glass, but the craftsperson (or persons) managed somehow.

If ancient history is your passion, you’ll find the remains of a Roman amphitheater, which used to house some 13,000 people in its day. Very little suggests that now, as much of it has eroded over time. For a coastal Tuscan experience, head to Forte dei Marmi, characterized by Art Nouveau architecture and a promenade, with shops, eateries, and bars. There is a “beachy high-end” feel to this part of the region, leading some to draw parallels with The Hamptons.

The beaches have wide stretches of sand and the water tends to be gentle, so you should be fine for a safe dip even if you aren’t a seasoned swimmer.

La Capannina di Franceschi is a restaurant during the day and a dance club at night. It attracts mostly young adults, some of them well-to-do. You may see a few Ferraris parked outside, and you can increase your chances of getting in by dressing impeccably. 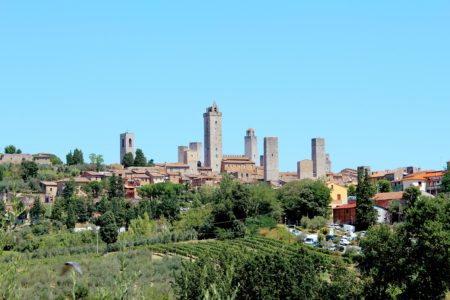 San Gimignano is on a hilltop, and is famous for its 14 towers (there were even more centuries ago), built by feuding wealthy families for status and glory. Each family wanted to flex on the others by erecting the tallest tower, and this was m ore or less the only reason the towers were built at all. It was a  you-know-what measuring contest, medieval style.

These towers would have been the skyscrapers of their day, and with that in mind, some refer t o San Gimignano as “medieval Manhattan.”

If you feel like a workout, climb the Torre Grossa, the tallest tower, and the only one open to the public.

You’d be remiss to visit Tuscany and not make time for wine! Head over to the Vernaccia di San Gimignano Wine Experience, if you’re curious a bout wine tasting and production. Pair this with a cooking class, where you learn how to make your own pasta from scratch. While technically next to Tuscany as opposed to being part of it, if you happen to be based on the border, you can easily jump between these regions.

You’ll love Umbria’s vineyards, groves, and lush, verdant landscapes. Todi, Spello, and Torgiano are just three of many Umbrian towns worth checking out for their visuals alone.

On the other side of Umbria is Lake Trasimeno, the fourth-largest lake in Italy, which  is not only scenic, but clean and warm enough for swimming, especially in the summer. In addition to the plethora of restaurants, town squares, and churches, Montepulciano offers sweeping views of the dramatic Val d’ Orcia (Orcia Valley).

The sommelier in your group might want to learn about Vino Nobile, one of the oldest wine producers in Tuscany. Moreover, Montepulciano has underground wine cellars you can visit, provided you don’t mind the trek back up to the main square (Piazza Grande). Drink enough wine, and perhaps it’ll dull the ache in your legs.

The affinity for vino can be seen yet again in the Bravio delle Botti festival in August, which calls for participants to push large wine barrels up the hill to the Piazza Grande as quickly as possible.  And with the summer sun still looming, you can imagine what a workout it is. Viareggio is another coastal town, home of the fun and gaudy procession of the Carnival, a pull for folks of all ages.

Expect floats, music, and revelers in costumes as you would at any parade. The undercurrent of satire is mostly directed at politics, both Italian and international.

Not a carnival person? No problem. Viareggio offers all the shopping, restaurants, and waterside hangouts you could ask for.

The Gran Cafè Margherita has a vast selection of meals, snacks, and cocktails, but be prepared to pay quite a bit for them, as the establishment capitalizes on being a former hub for the 1920s elite.