Travel Noire: How much was your plane ticket to Belize? 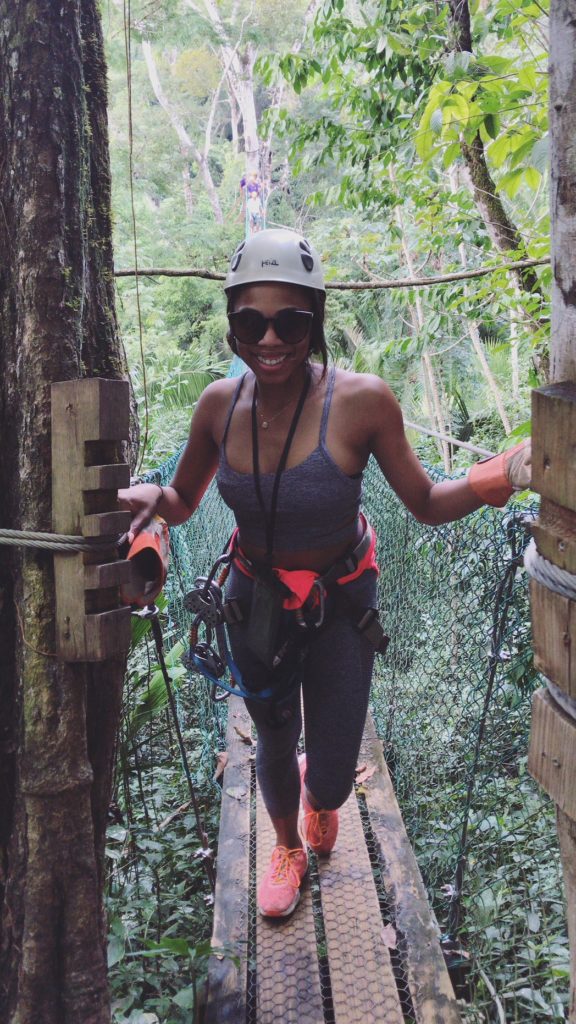 Travel Noire: Where did you stay while you were in Belize?

Raisha: Belize City is a beautiful place to visit, but it is somewhat underdeveloped. There are two US brand hotels in Belize City, the Renaissance Hotel and the Best Western Plus Biltmore Hotel, my friends and I decided to stay at the Best Western Plus. To be quite honest I was nervous about staying at the Best Western Plus, but the four of us comfortably paid $115 per person and the hotel was GORGEOUS! Not your typical Best Western. There was happy hour every day for $3USD and a restaurant across the street. Belize City is quite underdeveloped so most places closed at 5 pm and our hotel was rather secluded so we spent one night at the bar. The ferries to and from Caye Caulker and San Pedro stop running at 4 pm so I would suggest staying on the island vs. Belize City.

RELATED: Traveler Story: I Quit My Job To Travel And My Life Will Never Be The Same

Raisha: Our favorite place to eat was at Last Drop in Belize City. It was located at the Ferry Port, so ask for King James and tell him your girls from Texas sent you. You could easily order lobster + rice and peas + drinks for under $12 USD. We literally ate there every single day! You should never pay more than $10 for a full meal in Belize City, Caye Caulker, or San Pedro.

Raisha: Where do I start! Our first night in Belize City we went to a club called Sit and Sip and it was full of locals but so much fun! Avoid buying US liquor because you will spend double the price as most of their liquor is imported from the US. Make sure to stick to Belkin beers and Panty Rippers (A Caribbean favorite) and you will never spend more than $4 per drink on local liquor.

I would say the second coolest thing that we did were the tours. We met a guy named Richard Lord who can be reached at Richard@belizeprofessionaltourguide.com. He picked us up at8 amm from our hotel and for just $100 USD, he took us Cave Tubing, on a tour of Altun Ha (Mayan Temples) and Zip Lining in Cayo. He also included lunch for our tour. The only positive about staying in Belize City is the transportation to and from the various activities because if you stay on the island vs. Belize City, you will pay upwards of $250 per person for all 3 activities due to the long commutes. Although we stayed on the mainland, there was about 2 hours of driving round trip from our hotel.

Don’t forget about the Belize sign! It is located on the mainline, be sure to make time for that! Travel Noire: What would you do differently about your trip?

Raisha: In my opinion, I would honestly have stayed on the island vs. the mainland. The ferries to and from the mainland start at 6 am and stop at 4 pm and during the week day there are no activities in Belize City so once you’re in Belize City, you’re stuck. Randomly, we caught the ferry late to San Pedro and had a yolo moment therefore missing our return shuttle back to Belize City. We paid $20 per person to stay in a hotel in San Pedro. Had we known that this option existed we would’ve stayed on the island the entire time. If I could go back, I would spend three days in San Pedro (it’s very touristy) and four days in Caye Caulker. Caye Caulker is very relaxed and a much smaller island.

Travel Noire: What was the highlight of your trip?

Raisha: The highlight of our trip was the 2nd to last day in San Pedro and our last day in Caye Caulker. My friends and I woke up late after a very long night and we missed our ferry. We jumped on the next ferry to San Pedro, found a hookah spot right by the Belizian express drop-off point and grabbed daiquiris. We were having so much fun that we missed our return ferry back to the mainland, so we rented two hotel rooms above the night club (it was loud AF), woke up at 6 am to catch the 6:45 am ferry back to Belize City for our 8 am activities. We were tired, hung over, and feeling it the next day but it was totally worth it!

Raisha: It was extremely refreshing to be black in Belize. The people in central America are absolutely beautiful. The black people from Central America, most specifically Belize, spoke Spanish and Patua, and the latinx people spoke a mixture of Spanglish and Patua. It was beautiful and mind-blowing. They also love African-Americans, it was wild! Als,o the food was amazing, almost like a Mexican food with a Caribbean twist, like jerk chicken with tortillas! Travel Noire: Would you go back to Belize?

Raisha: I would totally go back because it was the most eye-opening experience ever. Staying in Belize City really brought me back to reality as Central America is still a very poor country, but it was absolutely beautiful and full of life! The people that I met in Belize were absolutely amazing and I still follow them on Instagram and I added a few on Facebook. I do think that Belize City gets a bad rep because it can be dangerous. My take on traveling abroad is to always ensure that you travel in packs and don’t put yourself out there. If you put yourself in the position to be targeted, it’s no different than the outcome in a US city.