Traveling during winter holidays is a trying time, for both your patience and wallet.

As people head into one of the most expensive travel times of the year, a recent study conducted by WalletHub found that at least 40 percent of Americans are opting to stay home this winter because they can’t afford it. 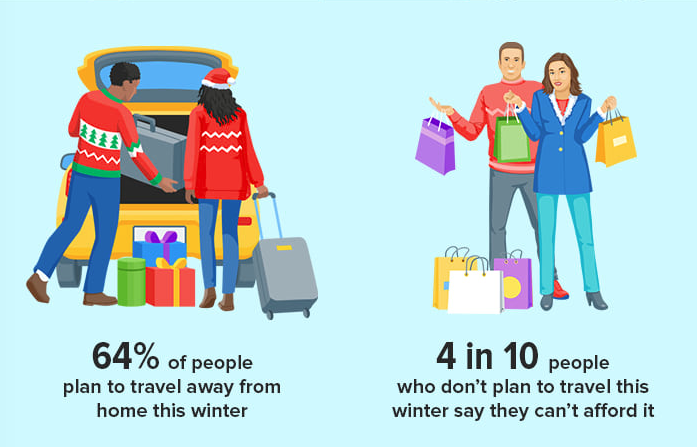 WalletHub’s Winter Travel Survey comes amid recent reports that the U.S. economy is flourishing. The unemployment rate dropped to 3.7 percent: its lowest level since 1969, the Labor Department recently reported.

Despite the unemployment statistics, many Americans are feeling the strains in their pockets.

“U.S. consumers will be shelling out billions of dollars in extra charges they otherwise could be spending on other things such as travel,” Mark A. Bonn, director of the resort and vacation rental management program at Florida State University, told MSN. “This makes it difficult to travel now, let alone after the holiday spending has ended.”

Even more alarming, the survey also revealed that more than 90 percent of the people surveyed believe that airlines take advantage of travelers by charging higher fees.

That’s why many of the respondents said they were looking into ways to make their holiday travel plans more affordable.

At least 80 percent of respondents plan to apply for a new credit card to save on travel this winter.

Following results from the survey, WalletHub analyzed which credit cards would benefit those planning to apply for a new one to travel.

WalletHub ranked the Barclaycard Arrival Plus Card as the best because it has an initial bonus of 60,000 miles, worth over $600 in travel, for spending $5,000 in the first 90 days.  Also, cardholders earn 2 miles per $1 spent on all purchases.

Capital One Venture was ranked as the second-best travel card by WalletHub. Analysts said the card offers the “best all-around travel rewards cards with a great initial bonus.” Spending $3,000 in the first 3 months will get travelers  50,000 bonus miles, which will earn cardholders an extra $500 in that can be used for any travel-related expenses that appear their bill.