If You Could Rename An Airport After Anyone, Who Would It Be?

?Most airports are named after the city they sit in, a former president or some random person travelers will have to look up.

Recently, the announcement was made that Louisville International Airport in Kentucky would be renamed after the greatest boxer of all-time, Muhammad Ali. Coincidentally enough, Ali was vividly afraid of flying. Back in the late 1950s, Ali prayed that he wouldn’t die while taking the one-hour flight from his hometown in Louisville to Chicago.

The news made us curious: if travelers could name an airport after someone, who would it be? Twitter had a good time answering this one.

If you could name an airport after someone, who would you name it in honor of? pic.twitter.com/86IU9gNzS2

There are so many amazing black figures who paved the way for us that deserve to have an airport named in their honor. It was clear that many travelers are fans of different entertainers and artists but one reigns supreme over them all: Mrs. Beyoncé Knowles-Carter. The Bey Hive will always stan for Beyoncé, but the Obamas definitely take second place as modern-day African-American royalty. Barack and Michelle Obama made so many strides inside and out of The White House and continue to do so now that his presidency is over. It makes sense that supporters would love to fly out of terminals named after the forever first family. Since Soulja Boy has made a “comeback” on everyone’s timeline recently, some followers felt like it was only right that airports be named after the King of Social Media.

RELATED: Muhammad Ali Will Soon Have An Airport Named In His Honor Some travelers wanted to pay homage to those who came before us and fought restlessly for civil rights.

Other world-famous entertainers were named as well. Just think how an airport named after Micheal Jackson, Prince or Rihanna would look. 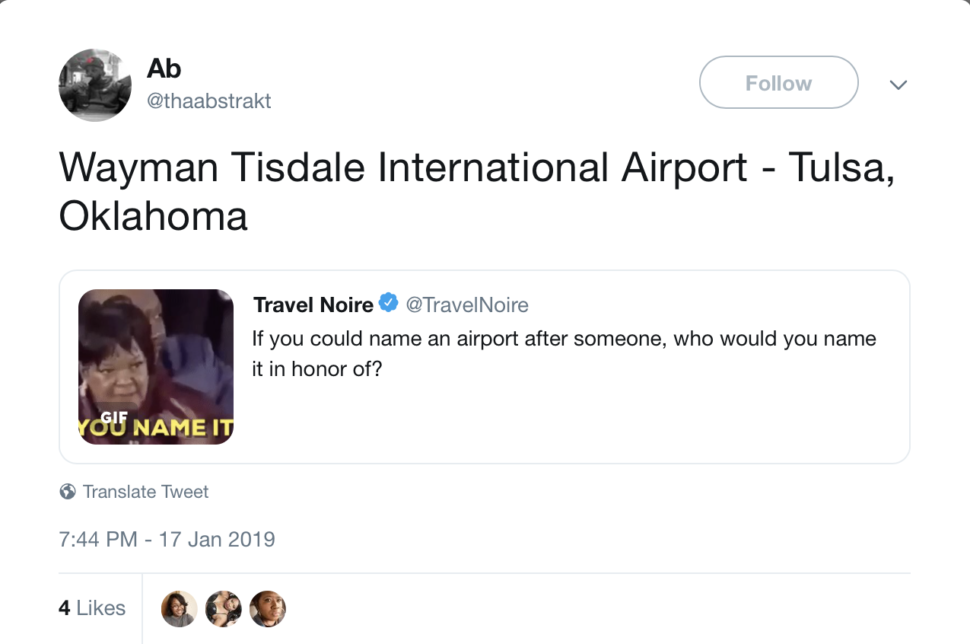 Even though the airports named in someone’s honor are named after typically someone famous, some travelers feel like your name doesn’t have to be found on Wikipedia to be important. One traveler had the sweetest answer of them all, naming an airport after someone close to their heart.