Explore Pisa In One Day Many dream of packing a small suitcase and jetting off on a tour of all that is Italian. Marveling at the beautiful attractions that ancient Rome left behind or taking romantic gondola rides on the canals of Venice or perhaps trying to figure how the building of the leaning tower of Pisa went horribly wrong. As beautiful as the popular attractions in Italy are, it can be a minefield in the holiday season, so I would definitely recommend seeing some places out of season. Having seen Rome, towns around Lake Garda,Verona,Venice and Bergamo, I thought it was finally time to see Pisa. I chose to visit in November as I knew it would be less crowded and the flights and hotel would be ridiculously inexpensive. Rightly so, because I was able to treat my two nieces and older sister to an early Christmas present. Flight, hotel and food all came to well under £500 for 4 people. Pisa had a wintry sun and still busy enough with tourists but with less of the chaos of peak season months. So a little research and planning can score you a bargain for you and family should you want people to share the experience with holiday company.

Pisa is tacked away in Tuscany, a region touted for its food, culture and art heritage. Once in Pisa, within 49 minutes you could also be looking at Roman Catholic cathedrals of Florence. Did you know that the beautiful city of Pisa can be seen in one day! Its always great to take time to fully explore a place, but if you have less  time, then you have to maximize  the time  you have to make the most of your visit. Below are 10 places in Pisa  you should not miss out on if you only have one day. Starting the journey from the city center and walking to finish at the leaning tower of Pisa.

When you arrive in Pisa, whether its via the airport or via Pisa’s Central Station, your exploration will no doubt start via Vittorio Emmanuele which is across from the main station. A charmingly beautiful square with plenty of little cafes to sample Pisa’s nibbles. The square also leads you to Corso Italia, the street housing retail shops and small markets. If you are great on your feet they also have a skating rink in the winter months in the square. If you are into a bit of colour, then prepare your eyes for a treat as just around the corner from Piazza Vittorio there is a hidden gem. Vivid and colourful mural by Keith Haring. Most people overlook this and just head to the tower. The mural covers 180 square meters of the Church of St. Anthony’s south wall. Perfectly themed around peace and harmony with 30 figures in animated poses representing different aspects of peace. A real treat in that it allows you to just get away from the tower’s chaos and chill out on the benches below trying to figure out what each figure represents. You will have no doubt have seen reproductions on many products, even by the likes of Tommy Hilfiger who featured the mural’s animated figures on a few of his products. 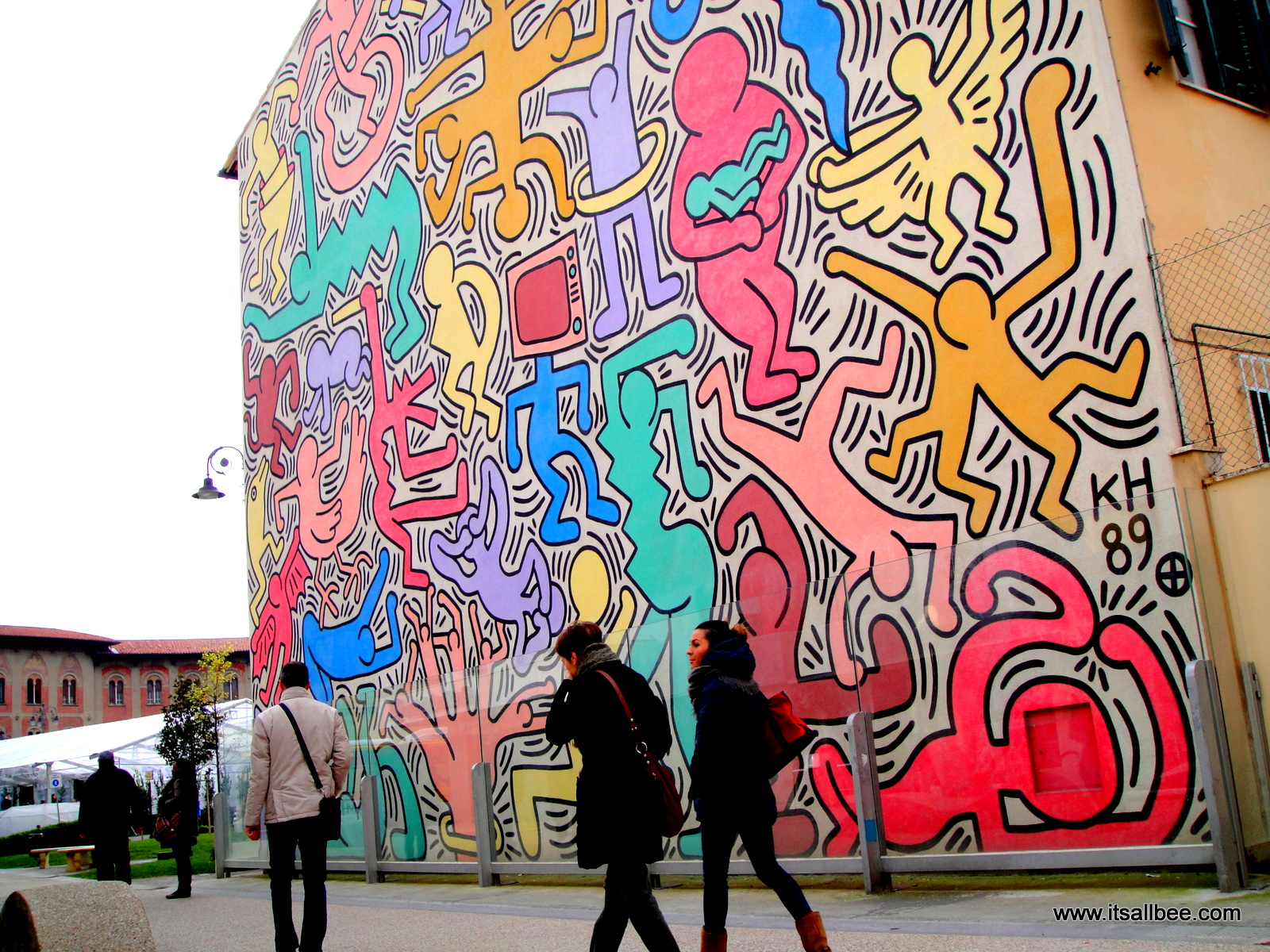 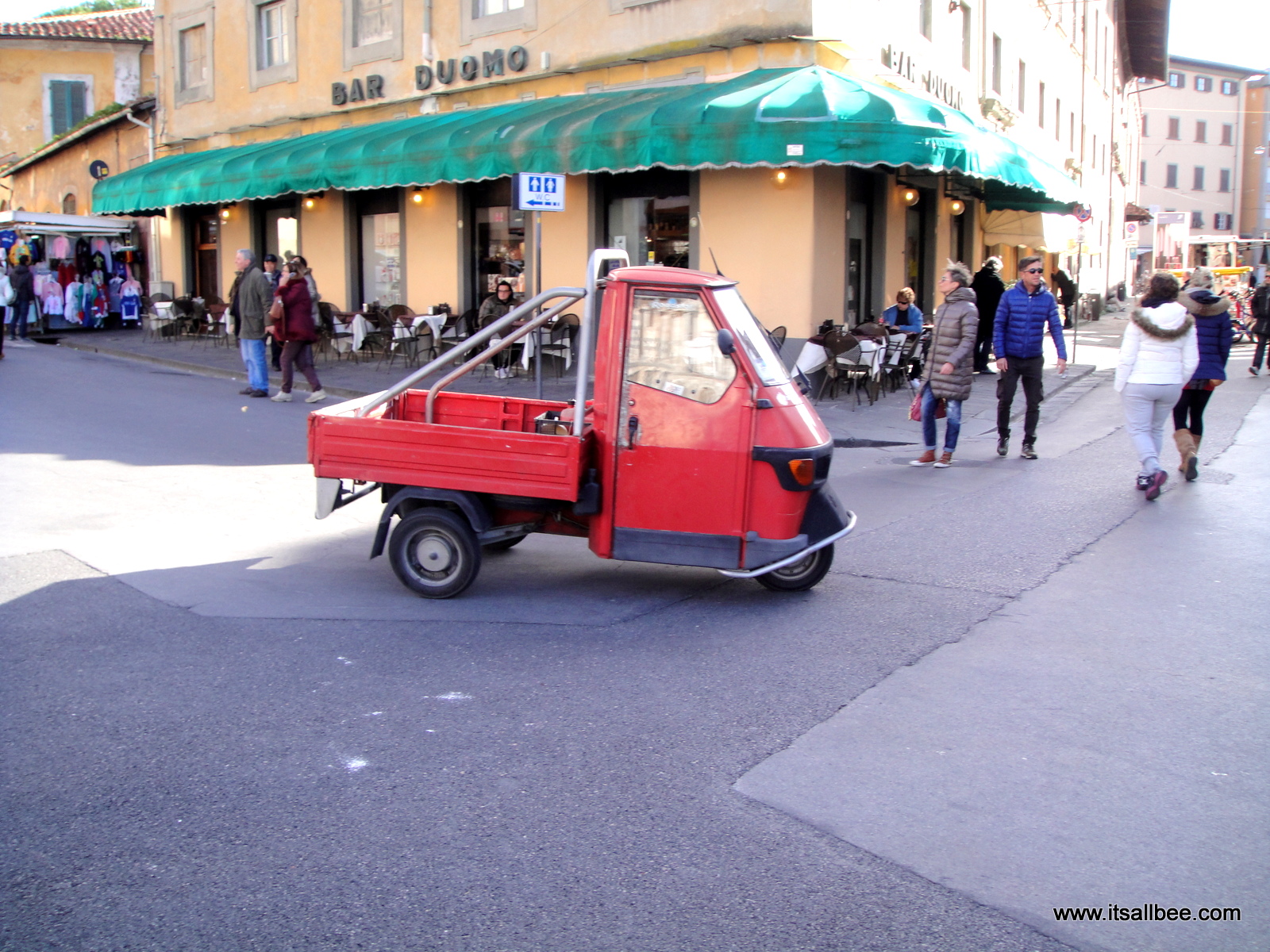 Often busy with plenty of students you can be sure to find a lively bar in town. There are many bars to cater to those that want to shake a leg or if you want a relaxed moment to share with the locals. River Arno is also lines up the restaurants and bars to entertain everyone.

This is a beautiful spot not only for  watching the sun go down as it reflects the river’s waters but also a point of reference for tourists.  The promenade on the river also has buildings going back to the Middle Ages. Many a celebration in the city are started from this point when the promenade is beautifully decorated as the locals and tourists take to the streets. Traditional events such as the Gioco del Ponte (The Game of the Bridge) where the city comes to a stop in a medieval joust between Pisa’s Northern and Southern neighborhoods with parades of people happily dressed in costumes. Pisa is in Italy and Italians are known for their food so you expect the same level of obsession to Italian cuisine, except that Pisa is apparently well known for its frog soup. I couldn’t bring myself to order this as frogs are just not my cup of tea but do let me know if you happen to have tasted it. 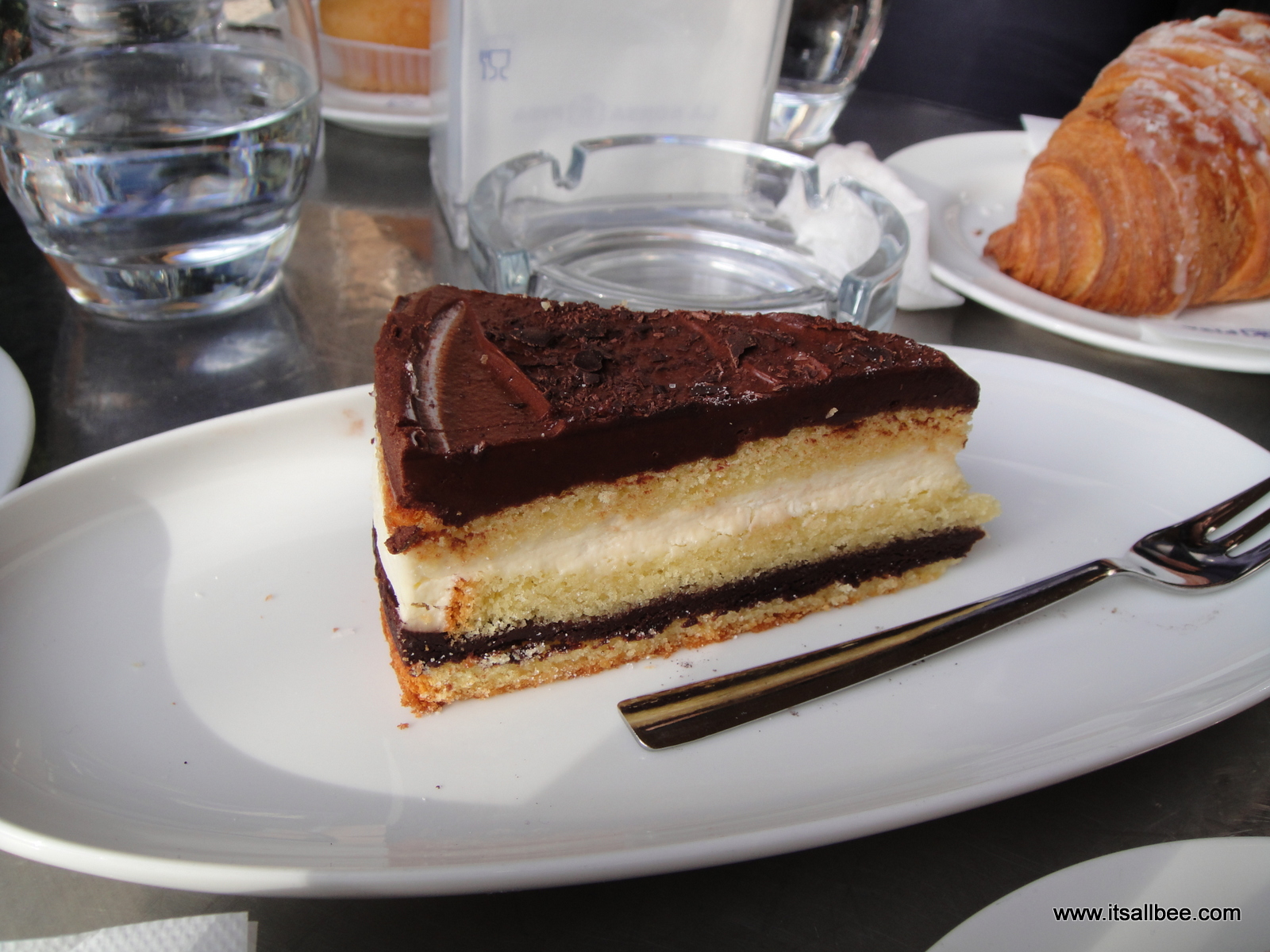 With any popular tourist destination  you will always find that markets go hand in hand. Bringing you trinkets and local produce, from freshly baked Italian goodies to souvenirs, to designer outlets and shops. After all, many of our  leading fashion brands originate from Italy so expect to drool over beautiful leather goods and clothes while passing through Corso Italia. The walk along the River Arno and past the bridge and  through the markets, leads you to Pizza dei Cavalieri which translates to Knight’s Square, a  square that was a political centre of Pisa and still holds historical significance for Pisa. Buildings decorated in monochromatic etchings on the facade known as sgraffiti attributed to Vasari, one of Italy’s famous architects, also remodeled the square, which features palatial residence and beautiful churches on the square. 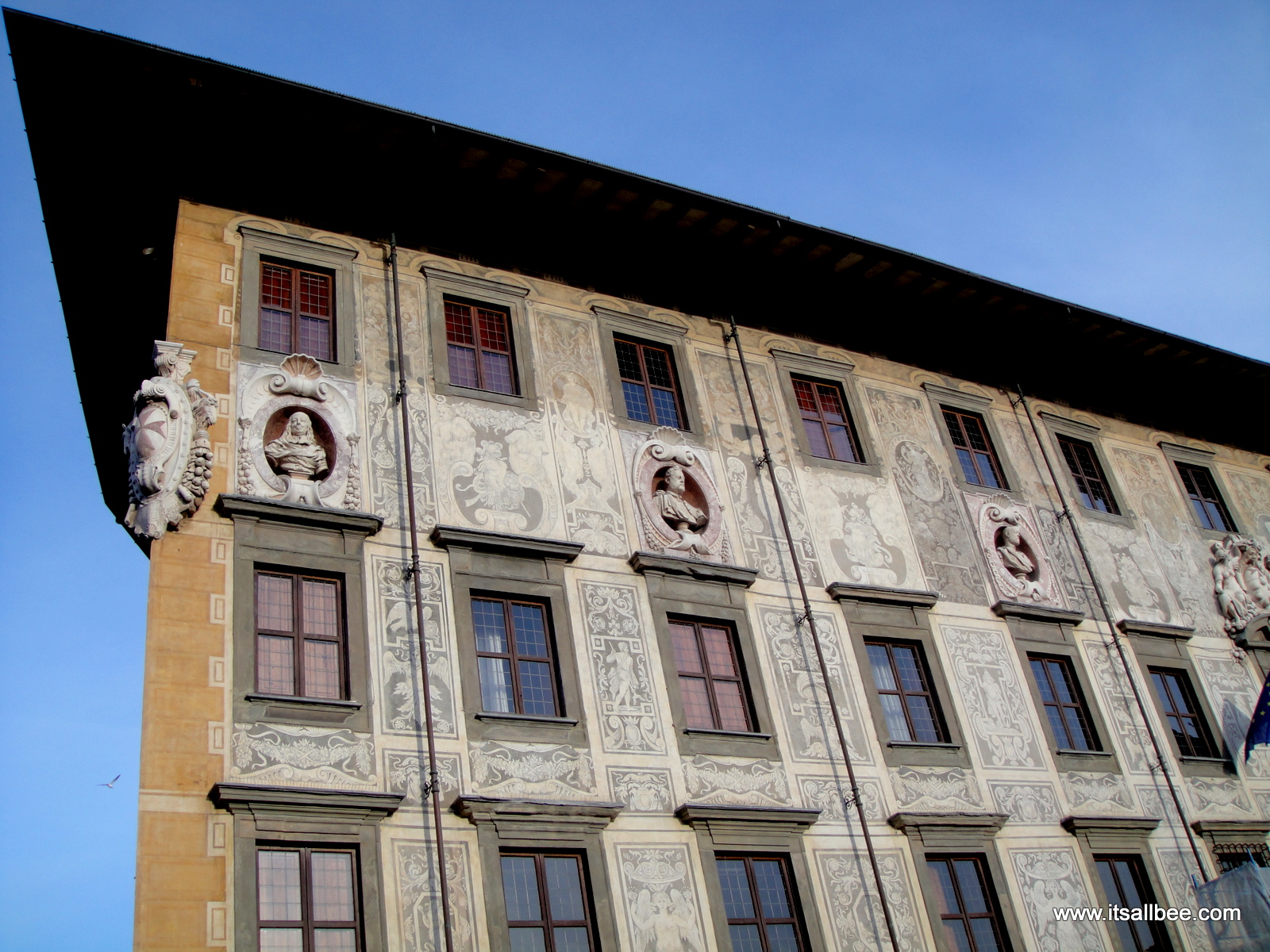 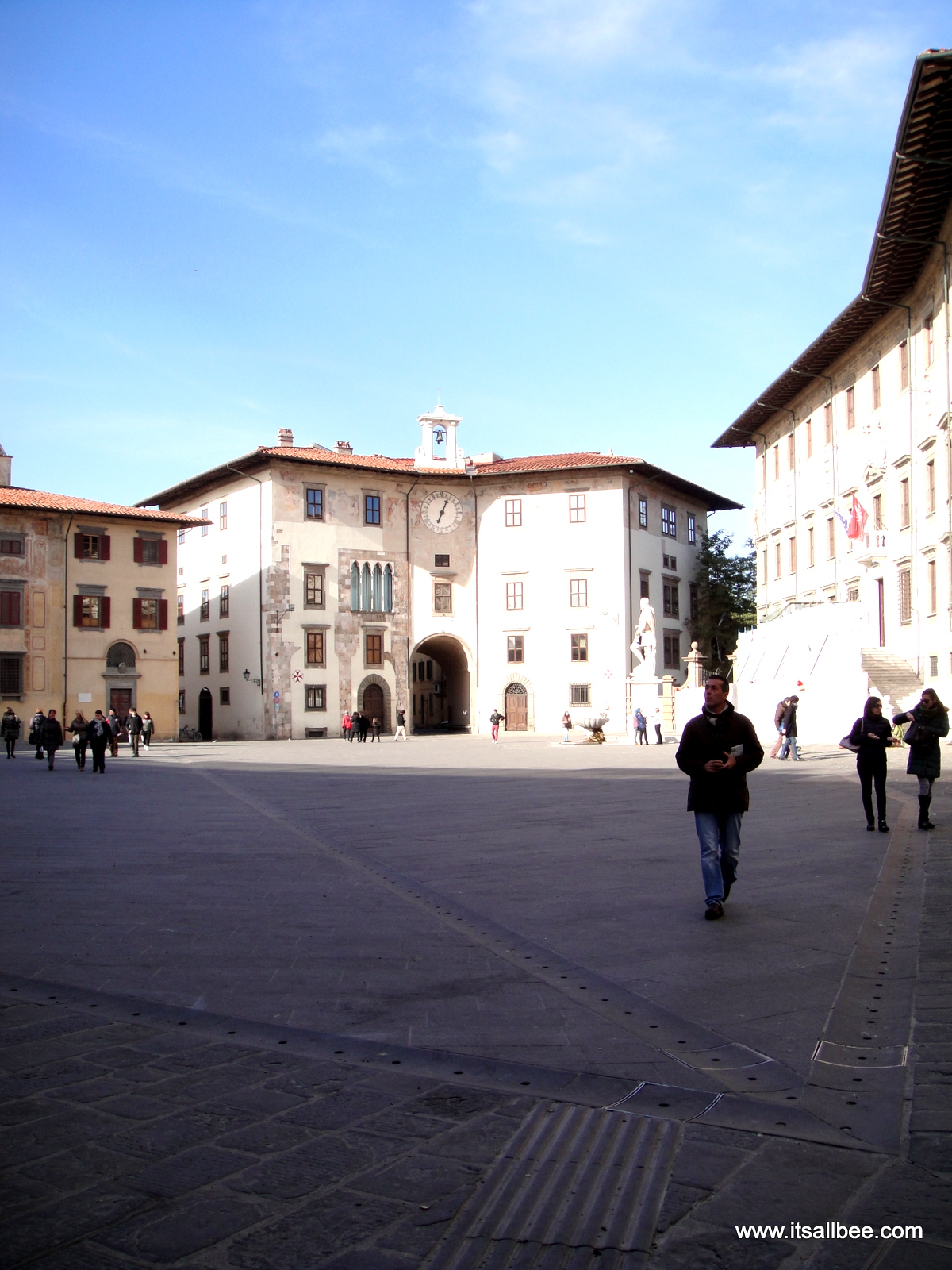 Walking through Piazza dei Cavalieri you are only meters from Miracle Square or Piazza dei Miracoli. This is the square that no one leaves Pisa without seeing. Home to Pisa’s top attractions; The Baptisery, The Cathedral of Saint Mary of the Assumption and of course the Leaning Tower of Pisa. The Pisa Baptisery is the biggest Baptisery in Italy. Built in 1153 a true of work of art that still takes visitors to this day. 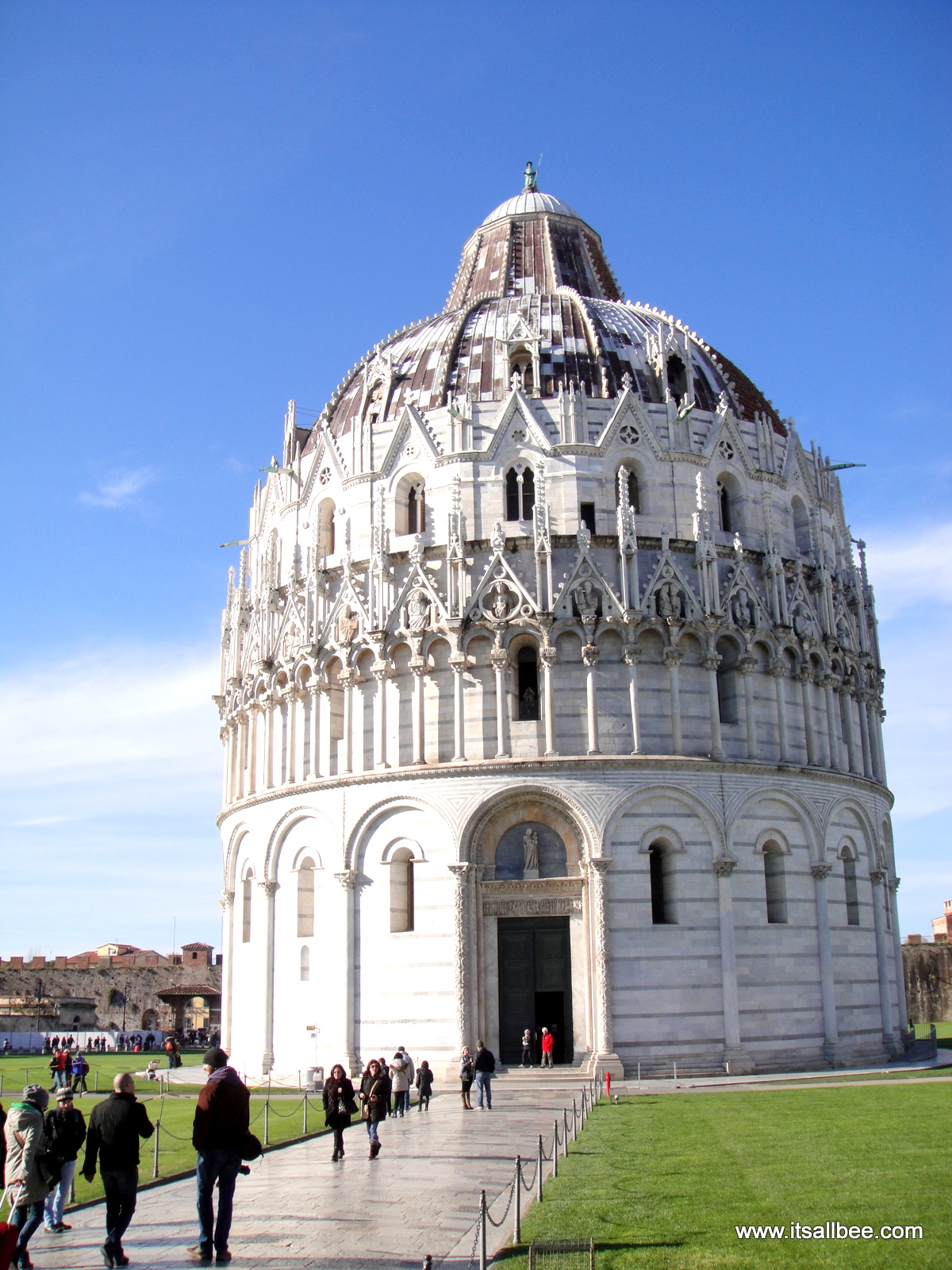 02 – The Cathedral of Saint Mary of the Assumption

Beautiful marble facade decorate this Romanesque cathedral. Still standing, you couldn’t tell that it was totally ravaged in 1595 by a fire that burnt through the cathedral destroying many of the bronze decor. Today it houses many works of art. Entry will only set you back less than 5 Euros. The pièce de résistance  or the number one attraction of the city. Bringing millions of visitors to Pisa to see just how far the tower leans. Surrounded by greenery where people young and old can be found doing the most entertaining of poses,  that you will sometimes have more fun people watching than taking in the tower. The Leaning Tower of Pisa is an example of a beautiful mistake. A constructional disaster (near) that now draws people from every corner of the world. A UNESCO heritage site that, and a beautiful sight at that!