I arrived in Bucharest, also known as the “Paris of Eastern Europe,” by land after a weekend in Bulgaria for the wedding of very close friends. Several guests and I had taken a taxi from Veliko Tarnavo and reached the Bucharest train station by mid-morning. While my travel companions departed to the Romanian countryside for 3 days, I embarked on a 24-hour solo trip into the city.

And so my adventure began… 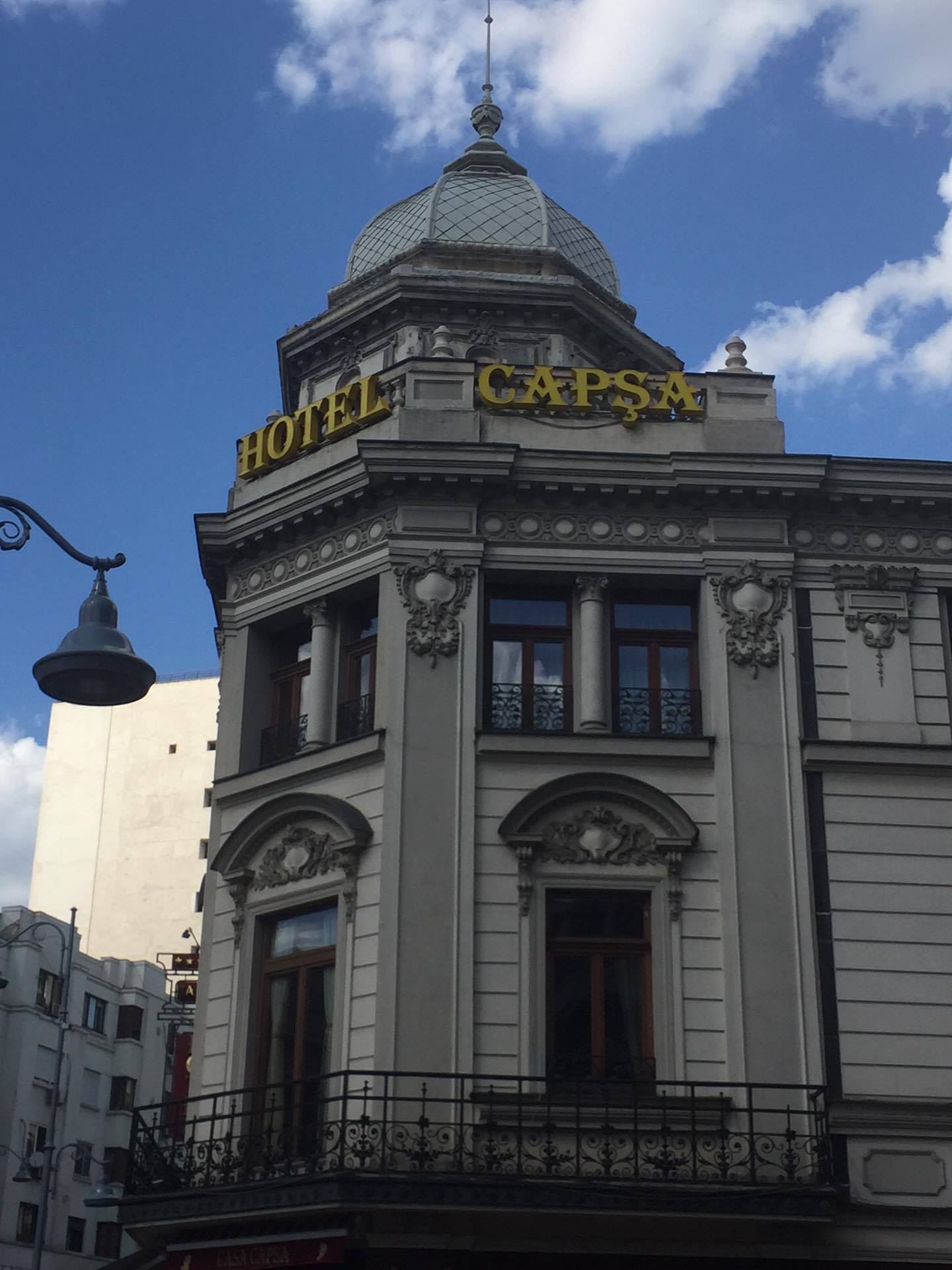 This splendid hotel is in the city center, only a stone’s throw from the University Plaza. During the 19th century, it was wildly popular among western Europeans visiting Romania as well as a gathering place of some of Romania’s great literary minds. The Casa Capsa was known best as a French style restaurant and confectionery. In the early 20th century, however, it became a meeting place for government officials and those particularly politically opposed to the freethinkers of its former frequenters. The hotel, complete with simple and well-designed rooms, was established in its present form more than a decade ago. Downstairs, the lobby was connected to the dining room of the famed Capsa Restaurant. There, I lunched on grilled fish, spinach and one of their famous confectionaries.

Casa Capsa is within a 10-15-minute walk to most tourist attractions on my itinerary like the Romanian Athenaeum, the Palace of Parliament and Cismigiu Gardens. Statue of Mihai Eminescu in front of the Romanian Athenaeum

A Walk down Calea Victoriei

Calea Victoriei is one of the main avenues in Bucharest. Along it stands striking buildings with some of the most beautiful architecture you’ve seen in this part of the world. Head south on Calea Victoriei and you will make your way to the city center, toward the Romanian Athenaeum, then the National Museum. On the steps on the Museum stands the iconic Trajan and the She-wolf. Even further will bring you to the Dambovita River, and just beyond stands the gargantuan Parliamentary Palace. The Palace is the second largest office building in the world, it has 1,100 rooms and hourly tours take place from the back entrance.

If on Calea Victoriei, head north and you will stumble upon municipal buildings, churches, stores, parks and museums: each with a distinct style, but they blend together to present a baronial cacophony of architectural elegance.

Bronze statue of Trajan and the She-wolf

Old Town houses can be found punctuated by bars, clubs, and cafes. It is just outside the University district so you will find yourself with a mix of expats and local co-eds, which may prove to be a fun experience. Whether you’re looking for booming electronic dance music (EDM) haunts, or just a place to have a cup of coffee, Old Town is the place to be. My final hours were spent people watching at Van Gogh Café, which has great sandwiches and is ideal for people watching.

Probably the highlight of my day trip to Bucharest was the few hours I spent in Cismigiu Gardens. It’s the largest park in central Bucharest and reminds visitors who have been to New York of a mini Central Park, except with a splash of nationalism. Starting from the rivers’ bank in the park, each winding Trail leads to a small garden, surrounded by the busts of great Romanians from national poets like Mihai Eminescu to journalist, politician, and literary critic like George Panu. I was delighted to learn that in 2002, the US Embassy and the Romanian Government inaugurating a memorial to American WWII soldiers who lost their lives in Romania.

“Food is the indication of whether a country is worth returning.” – Me

A few of my Romanian friends without question would debate this, but I found La Mama Restaurant ideal. The menu gave a wide selection of Romanian dishes. I ordered the tigaie picanta (Hot Pan) and ciorba de burta (tripe soup). It was a simple meal, but I have every intention of returning to try other meals. Bucharest is enchanting, and it will speak to the dreamer in you. Nothing was hectic or even offensive during my short stay, and it was a warm experience anywhere I went. Whether traversing the city by metro or checking out the city courthouse, I found that being a wanderer in this jewel of Eastern Europe was both safe and enjoyable. There were times in the Garden’s I just felt compelled to sit under the busts of famed Romanian artists and sketch out my own work of art.

Bucharest is a recommended destination and, like any incomplete story—it deserves more time than what I was able to give it, but I’ll return to it.