What’s The Best Part Of Traveling While Black?

For years, there has been a myth floating around that black people don’t travel. That couldn’t be any further from the truth.

The fact is, black travel is alive and well. And it’s not just stateside travel we conquer, black travelers have made their mark all over the globe and did it with style. We made traveling look so cool that everyone is following our lead. TN wanted to know about your experiences.

Question of the day: What's the best part of traveling while Black? ✨ pic.twitter.com/TiPmfL9owa

It’s a known fact that black people have attributed to all the different types of styles seen around the world today. Many black travelers said they have witnessed that whenever they travel. Others get a sense of beauty when they travel. One TN follower said people adore the sight of black women and it gives her more confidence. Another said being black while traveling makes you the target of everyone’s attention, but in a good way. Unfortunately, in some places, people are still a little scared of black people. While some people may be offended by that, others use to their advantage, like this follower. Apparently, they treat black people a little better overseas than they do here in the United States. The locals take a serious interest in what we as a people like to do, which is a major travel turn on for some people. 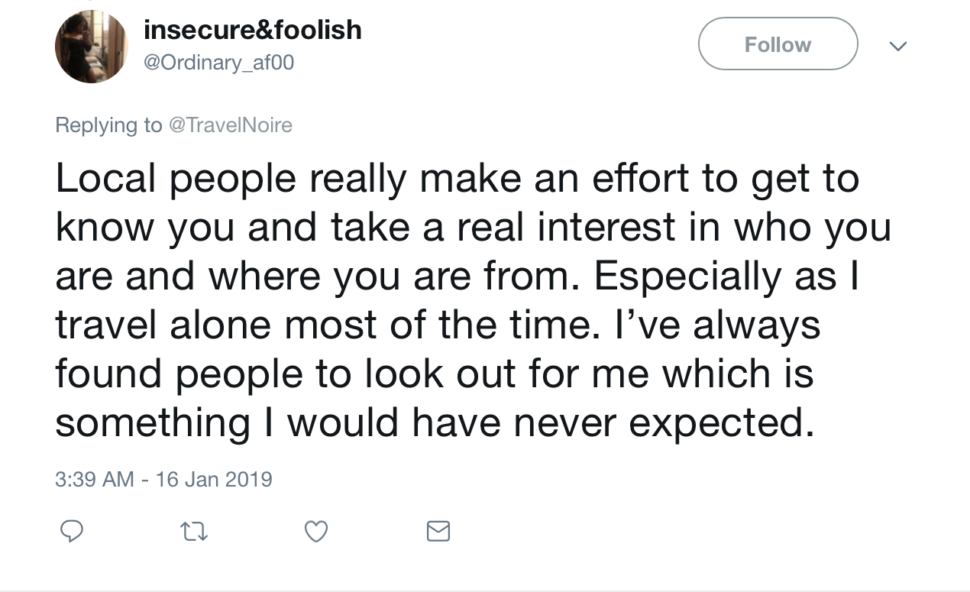 And of course, being mistaken for a celebrity never gets old. It gets you a few perks, and everyone wants to take pictures with you. Traveling while black also helps us prove people wrong. The stigma of black people not being able to afford things is present. Some of TN’s followers had to make sure they put flight attendants and other officials in their place.

Everyone experiences something different while traveling, but there is one thing black travelers all have in common: being cool.