Some things can make our traveling experiences amazing. It could be the people that come with us, the food we chow down on or the excursions we participate in. But none of that matters unless you have some good tunes in your ears.

TN wanted to know what you like to listen to while traveling. We must say that our followers’ taste in music is very diverse.

Question of the day: What’s one song from the last year that you absolutely have to have on your travel playlist? pic.twitter.com/yfipqzTpPC

One thing is for sure, everyone is a fan of Miss Cardi B. And rightfully so. You can’t escape seeing the Grammy-nominated artist. It makes sense that a lot of people need to listen to her while they’re traveling. 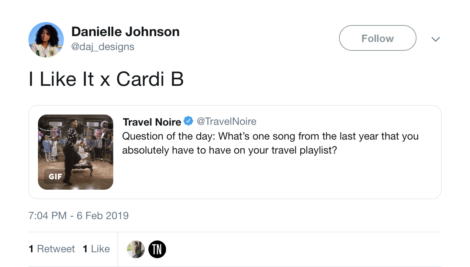 Women are taking over the music scene. Two women that we can’t escape is City Girls. The two Miami sweethearts have had us twerking to their tunes since they popped up on the scene a few years ago. They have worked with industry heavy hitters like Drake, Jacques and of course Cardi B, for their latest hit, “Twerk.” One thing is for sure, Beyoncé is still the queen of this music game. With eight albums under her belt, two with her husband, JAY-Z, Queen Bey is here to stay. Her latest album, “Everything Is Love,” is nominated for some Grammys and her proteges, ChloexHalle are singing their way into our hearts. Some random artists popped up on the list which shows that our readers are listening to much more than hip-hop. Artists like Buff Baby, Thundercat, and Spencer Brown made the list, and we are definitely going to listen. 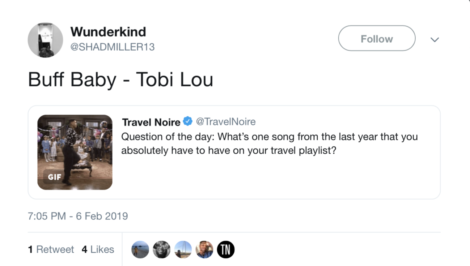 And of course, some of our absolute favorites made an appearance. Regardless of what everyone says, Drake is the man. So is Childish Gambino, who is killing the game in music, television, and film. Since you like all of these songs so much, we decided to compile them all into one big playlist on Spotify. Put your headphones in and enjoy!