I have visited Haiti on four separate occasions. My mother’s side of the family is Haitian, so when I visit, we reunite with family, as well as plan excursions to see or do something new each trip.

There is a notion of Haiti as a trauma-plagued, helpless nation. While extreme poverty does exist, this single image of the country is often exploited. Though there are truths to many of these images, I am of the philosophy that nothing should be examined through a single viewpoint. With this post, I would like to provide a different narrative. Not one that ignores reality, but one that presents a different perspective and creates a more complex and thoughtful vision of a country full of resilient and hard-working people.

Travel day. After a midday flight, we arrived in Port-au-Prince at the Toussaint Louverture National Airport (named after the revolutionary who led a successful slave revolution against France, which won Haiti its independence in 1804). There is a pride of nation visible even at the airport, with musicians greeting those who landed with music made by traditional instruments. This pride for nation is further highlighted by the public historical monuments placed throughout the city. • If possible, take only a carry-on. There is a single baggage claim carousel and it gets crazy. Also, attendants at the airport are pushy and will immediately try to help you with any large bags. They will expect to be tipped the second they lift a bag, so either have small bills prepared, or forgo large bags completely.

• American dollars can be used throughout the country, so currency exchange is not critical. However, if you buy food off of the street, even a $1 bill is often too much (and many street vendors don’t take American coins), so I would recommend a small amount of Haitian gourds to purchase treats at the street markets.

• Be aware of the water you drink. Avoid tap water, always choose filtered or bottled water. Make sure your ice cubes are made from filtered water. Culligan water is always a safe bet.

The day, of course, started with breakfast. Notes on breakfast in Haiti:

• Spaghetti is a breakfast staple in Haiti. It is usually cooked in oil with peppers, onions, and spices, sometimes eaten with ketchup.

• The coffee is smooth and delicious, but quite low in caffeine. Also, Haitians will almost always make coffee with milk and sugar (a lot of it) as default.

In the afternoon, we ventured to the Musée du Panthéon National Haïtien, a museum dedicated to the heroes of Haitian independence. It features a permanent exhibit of the history of Haiti, from the pre-Columbian era to modern day. The anchor from the Santa Maria is located here, as well as bones from the founding leaders of Haiti. There is also an art gallery section. Unfortunately, no photos are allowed inside of the museum. We took a road trip to the village of Ennery, a three-hour car ride north of the capital. My late great-grandmother is originally from Ennery, so it has become the meeting point for our family reunions. During our drive, we stopped along the way for a few treats:

• Tablet: nut brittle made from peanuts or cashews.

We stayed at Hotel Le Village D’Ennery, a lovely and calm hotel/resort. The food here is great. The hotel has two pools, and the rooms are comfortable. Good service all around.

Ennery is a small town, designed during colonial times. It is a mountainous region surrounded by small rivers. Not what I would consider a tourist destination, but a good representation of a humble, inland village. We ventured back south to Moulin Sur Mer Beach Resort, a hotel and private beach along the Côte des Arcadins, for the afternoon. The beach was lovely, and the resort is beautifully maintained. It offers activities including kayaking and jet-skiing. The beach had crystal blue water and white sand, a picturesque Caribbean landscape. Back in Port-au-Prince, we spent time at the newly built Marriott Hotel. All of the exhibited artworks in the hotel are created by Haitian artists, many who were pioneers of important Haitian art movements. I had the opportunity to meet one of the artists, Jean-Louis Maxan. He gave us a tour of the art in the lobby. Many of the featured artists also have gallerists in the United States and France. We took a tap-tap (pickup trucks that are brightly painted and converted to mini bus/taxi hybrids) to the Observatoire, a hilltop viewing area of the city. The view is spectacular. You can see all of Port-au-Prince, the shipping ports, and beaches on the distant coastline. The Observatoire hosts gift shops and a restaurant that sits en plein air.

Next, we stopped by Le Centre d’Art, an educational center, gallery, and institution for the promotion of Haitian art. There are rotating exhibitions as well as workshops for emerging artists. We went on a tour of the space and were given an oral history of the center’s importance in developing many of Haiti’s modern artists.

The day ended with a family party celebrating a relative’s birthday. So, there was plenty to eat and drink. Allow me to highlight my all-time favorite Haitian foods and drinks: 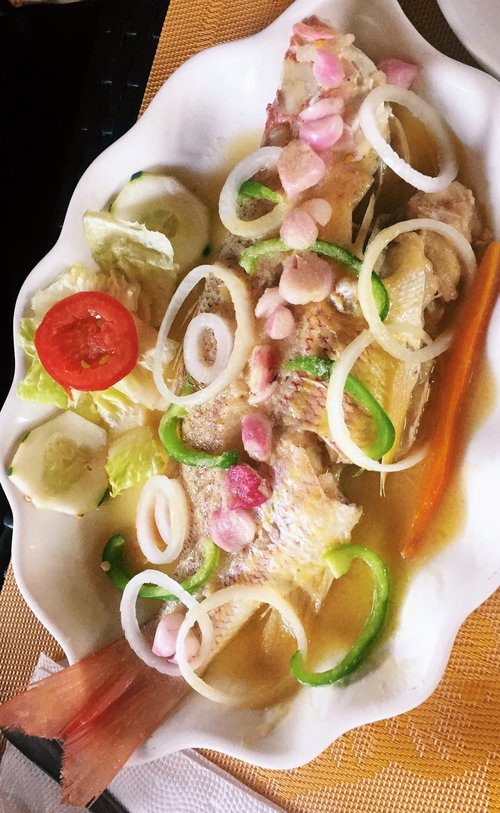 Travel day. Before getting on our flight, we headed for the duty-free shop. Here are the things you should bring home with you from Haiti:

As I’ve been to Haiti many times, and have seen many of the major cities and beaches, I have an understanding of the diverse landscapes within the country (both geographical and economical). I hope that this travel diary has presented new knowledge of the country’s culture, cuisine, and touristic landmarks. The support of sustainable business, ethical tourism, and the empowerment of local voices are crucial towards helping Haiti reach a more stable future.

This post was written by Natasha Ntone and originally appeared on natashantone.com.

For an exclusive guide to where to eat, what to do and what events to attend in Haiti, click here to join Travel Noire Plus, your key to all popular travel destinations.