The Rituals We Take With Us

Over the years, even the most eagle-eyed of friends have missed the discreet cross-shaped smudges of hardened oil that greet you on the doors, window sills and mirrors of every house I’ve lived in over the past five years.

Come spring-cleaning time (which for me is cathartic so occurs one to two times a month), these smudges are wiped away with the surety that the next time I have a nightmare or give in to a prompting brought on by anxiety, new oil slicks will be artfully drawn from north to south and across from east to west- in the name of the Father, Son, and Holy Spirit.

This ritual of anointing people, places, and things have biblical roots. Rituals are not new to me: I was raised Catholic. Through childhood interactions, I was also exposed to a particular brand of late-eighties to mid-nineties northern-Nigerian Pentecostalism. The result was the unfortunate effect of creating hysteria over the next thing that could pull saints into the occult or have them left behind should the rapture take place at any moment. 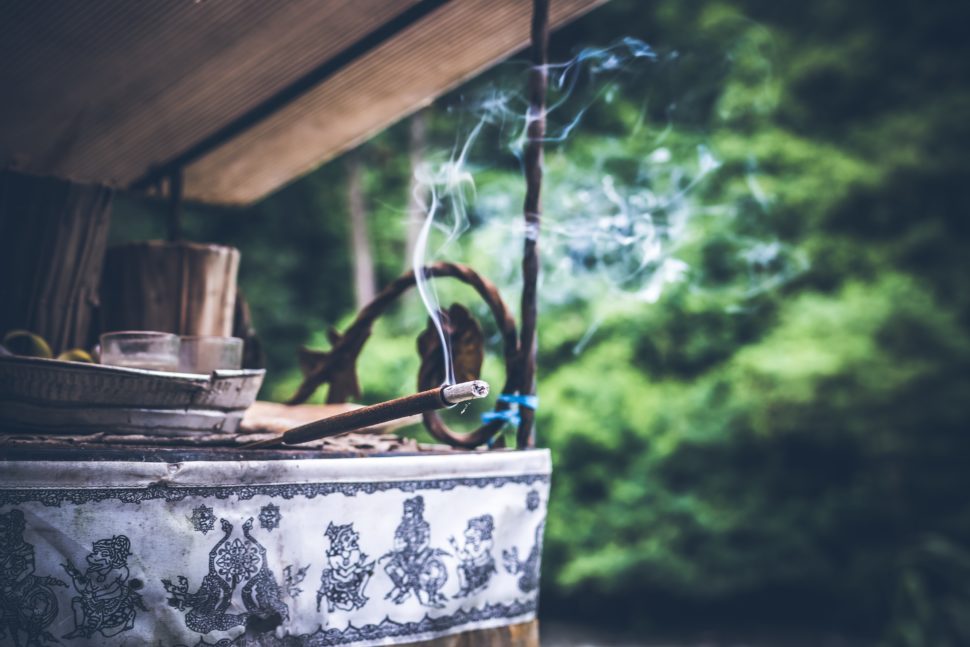 After-school hours were spent with university-going adults who held deeply philosophical and theological conversations that I’m sure were interesting for them but terrifying for most of us children. There were tales of a hand appearing out of nowhere to strangle a woman in her sleep, people being forced to attend demonic night-time meetings, and the constant reminder of hell. In a bid to ensure that when the rapture occurred I would ascend to glory with the other sinful saints who had remembered to ask forgiveness for their sins, I conceived the first of my many religious rituals. At the end of each day I gathered the children in a small group and sought forgiveness:

‘Please forgive me for anything I did or didn’t do today which offended you in any way’.

Many evenings were spent repeating my fears to my parents who cuddled and assured me that I wouldn’t be left behind just because unlike many of the adults I’d encountered in aftercare I didn’t believe cosmetics were sinful. My parents both worked two jobs and juggled driving my sisters and me to school from our house at the edge of town. Calming a forever-anxious child whilst navigating their own faith and not having all the answers to my complex questions must not have been easy.

In the decades since, I’ve marveled at how many have effortlessly brushed off the philosophies from that time. Not so with me. My weird and wonderful mind found a way to reject many of those harmful messages whilst still clinging to the fear they evoked. As such many of these fears morphed into phobias that I still contend with today.

The noughties brought a major change in my family as we decided to practice a non-denominational Christianity which we still adhere to till date. This brand of faith is something that has given me comfort as I’ve journeyed across three countries and two continents in search of career opportunities. My first journey away from home at the age of 17 was made in naivety: I had hoped that new surroundings would bring new thoughts and feelings, or perhaps just suppress old ones. But inner demons don’t need visas. They follow and continue to hound. Over the past couple of years, I have found my balance, or at least what works to keep me functional and comforted by peace of mind. And my strategy is entirely dependent on faith.

The different cultures and opinions I’ve engaged with and my personal growth as a scientist have contributed to the evolution of this faith. This has involved me adopting new beliefs and attitudes while letting go of others. Unfortunately, many of those lingering fears remain even if as only faint echoes. However, I’ve also held onto some comforting aspects from Pentecostalism and these have manifested in the way I create my temporary home per country/county I find myself in.

As a Christian, the lifestyle of praying ceaselessly remains with me. I pray out of joy, indifference, anger, sadness, fear, you name it. I pray at every time of day, on my walk to work, before making decisions. I pray when my faith is strong, and still when I question if God exists. I’ve prayed (and cried) before moving across countries and prayed over every home and hotel I’ve lived/lodged in. Prayer, however, is not a ritual, it is simply mindful and meditative communication.

The ritual that I cherish is that of anointing. The oil to be used can be purchased in a shop but must be prayed over, with declarations made about its purpose. It is also noteworthy that the adjective used to describe the oil is in the present continuous as opposed to past tense, thus anointing versus anointed. Perhaps this is indicative of how much we attach to what this oil represents. Mind you, as a Nigerian, not just any oil will do. The Goya brand is what I need for the sole reason that it’s what I’ve always seen used. Familiarity breeds comfort. So, in 2013 when I was about to leave Nigeria for the UK, I convinced my big sister to give me the 200ml bottle that had been prayed over by her (now ex) pastor.

This beloved oil has anointed the five houses I have lived in within the UK. The process of anointing is carried out by saying a prayer whilst I pour a small amount of oil on my fingertips and draw crosses on my window sills, mirrors, headboard, and my forehead. This simple ritual makes me feel like I am sanctifying my living space. It is probably safe to say that having OCD has influenced my latching onto this ritual, especially in light of my early encounters with Pentecostalism being confounded by immense fear. I don’t mind this and don’t feel the need to question or untangle it. There are certain religion-induced artifacts within my personality that will eventually need to be challenged, but the comfort I draw from anointing is not one of them.

The UK has been my home for the past five years, and only within the next couple of weeks will I know exactly where next I will live. Wherever that may be my anointing oil (which is around the 80ml mark now) is coming with me. And when it is finished, I will buy more but only the Goya brand.