How to do New Orleans in 72 Hours

Cities like New Orleans or Miami are known to be popular with weekenders. They boast a vibrant party scene and a lax drinking culture that attract young partygoers. Birthdays, bachelorettes, or holidays like spring break and Mardi Gras are prime reasons for booking a trip these places. But what happens when the spring breakers are back in school and the Mardi Gras beads are all but cleaned up off the streets? Do these animated cities turn into sleepy towns? Is there anything worth visiting if not for the signature attractions?

I quickly came to find out that a weekend trip to New Orleans, any time of the year, is bound to be a great idea. With charming architecture and lively events almost everyday of the week, it’s impossible to run out of things to do and places to see. I can attest to that because not too long ago, it was the perfect setting for a weekend gateway for my friends and me.

It was just the beginning of summer, my friends and I, an eclectic group of travelers, foodies, intellectuals, and fun-seekers, were itching to discover a new place together. We settled on the Big Easy, a budget friendly and relatively close option for a group of East coasters. But as is life, “real world” obligations had us on a time constraint and all we could scrounge up were 3 days to call a vacation. Luckily, having a New Orleans native amongst us, we mastered the art of getting the best of NOLA in 72 hours. The House on Dumaine St.

We arrived on Thursday night and headed for our Airbnb accommodations. The house was advertised as an “elegantly decayed Creole mansion “ in the heart of historic Treme. True to its description, the place was a gorgeous two-story town house with a yellow exterior, several green shutter windows, and a French balcony designed for lounging with a glass of ice tea. We were in heaven. Most of the night we spent taking in the beauty and history of the home as a lot of the original parts of the house were still there! The best part? Apparently that same night was the 145th anniversary of the death of the free woman of color who originally owned and lived in the house. What’s New Orleans without a ghost or two to make your stay authentic? The next morning, we decided to tackle our health and our sight-seeing with one stone by taking a running tour of Treme and the French Quarter. Jogging past some of the nicest Creole style homes and busy FQ businesses was the best 3 miles I had seen in a long time.

For our first full day in New Orleans, we were lucky to stumble on the annual Oyster Festival, spread out in all its glory along the Mississippi River. Crowds packed the lawn of the Woldenberg Park where scores of New Orleans’ finest seafood restaurants and wholesalers showcased their goods. We sampled oysters in all forms: raw, deep fried, battered, buttered, and drenched in hot sauce, while local bands played in the background. I found my BBQ oyster po-boy was best served with a cold beer catching the breeze along the riverfront. Oyster Festival along the Mississippi River. A few hours at the festival and we were ready to take it up a notch. It wasn’t quite happy hour but once we found ourselves on Bourbon St. it didn’t matter what time of day it was. The streets were calm and subdued and most places looked like there were closed so we were just about to give up when we heard gales of laughter and music pouring out of a side street. It was coming from an Irish bar by the name of Pat O’brien’s. Skeptical as we were (Irish bar in the French Quarter???),  it was raining pretty hard and we were in need of shelter. Little did we know, this was The Pat O’brien’s, home of the Hurricane cocktail and the dueling pianos. Local entertainers would take to the stage and battle out their renditions of popular songs by request of the rambunctious audience. So there we were hours later, hurricanes in hand, listening to the country–southern version of Beyoncé’s single ladies and cheering with the rest of the audience. This Irish pub had a southern kick and my friends and I were glad we found it.

Later that night, we came back to Bourbon St. and joined the throngs of people starting off their weekend New Orleans style. Hand grenades, motorcycles, pit bulls and snakes, anything goes on this nightly street party. When we had enough of the craziness, we ended up at Vasos, a dive club in the Marigny section of town. It was a dingy, dimly-lit open space with a stage and a make-shift dance floor but the live jazz and blues made the place come alive. Cheap drinks and no-cover, you could find all kinds of people, mostly locals, bobbing there heads our dancing the night away at in front of the band. A rainy day on Bourbon St.

Day two started with another run through the French Quarter and quick brunch near by. There was going to be a Second line parade in Central City and we didn’t want to miss it. A second line, one of New Orleans signature traditions, is the crowd that follows the brass band down the street. Characterized by music lovers and band enthusiasts often waving handkerchiefs in the air, being apart of the entourage was a thrilling experience. People were dressed in their Sunday bests and colorful floats filled the streets following the band all the way to Joe’s House of Blues. This part of town doesn’t usually attract tourists so it was great to see that many people were happy to talk to us and make us feel apart of the community.

After the parade, we ended up at Jacque Imo’s in Carrollton, a quirky restaurant that’s well known for great dishes and an unusual trademark desert. Away from the bustle of tourist territory, this place is a favorite amongst locals and the wait was incredibly long. But we made use of the time by walking around on Oak Street and even picking up a few items from a cute vintage shop down the way. When we finally got back to the restaurant, the waiters were loud, sarcastic and hilarious and the food was a delicious mix of Creole and Cajun fare. And yes, we even tried the legendary alligator cheesecake. Something between an appetizer and a desert, it’s a taste I can’t quite describe but definitely something everyone should at least try once. The second line culminates at Joe’s House of Blues

For our last day, we tried to take it easy and check out some of the more typical sights in the city. We walked around the French Market in search of souvenirs. You can find all kinds of masks and Mardi Gras trinkets here to remind you of your trip. I even snagged some beignet mix and a box of pralines from Aunt Sally’s Prailne shop. After spending most of the day cruising the streets (and grabbing snacks from Café du Monde of course!), we wanted to end our stay with a bang. This called for a little house party, New Orleans style. We headed to a local market, stocked up on our party essentials, and invited all our new and old friends to a crawfish boil out in the garden. In the muggy Louisiana night, we talked and laughed and ate our spicy seafood into the night. I couldn’t think of a better way to end the trip. 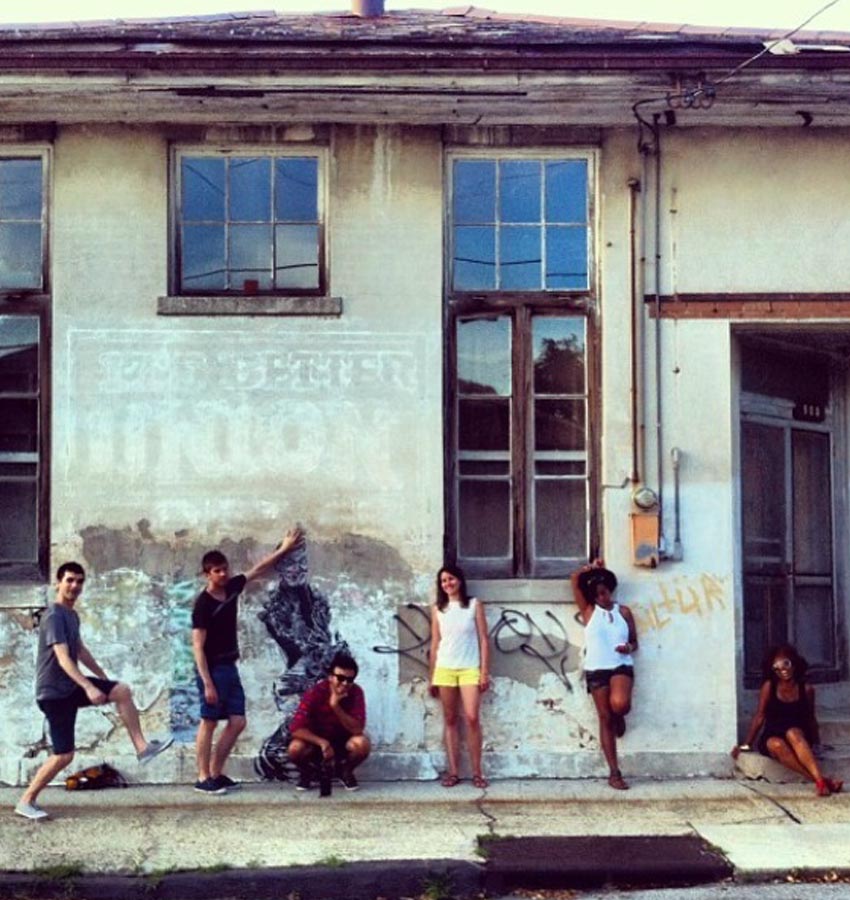