In the latest episode of his podcast, and on the heels of a pretty amazing Trinidad Carnival, Joe Budden had some choice words about Carnival costume culture…and Caribbean Twitter was not having it.

“These chicks can’t wait to put on those Carnival outfits and be hoes,” Joe Budden said in Saturday’s episode.

But Carnival is more than just a colorful street party, and those “outfits” that women wear during the celebrations (vibrant costumes with feathers and gems) are part of a long legacy of celebrating freedom. For many Caribbean islands, Carnival is a pre-Lenten tradition that dates back 100s of years. The way it’s celebrated today is a nod to tradition, but also a manifestation of how far the people of these islands have come — from slavery to freedom and prosperity.

Budden was specifically referencing singers Mya and Ashanti, who both attended Carnival celebrations this year. Both singers, along with tons of other celebrities and influencers, donned festive costumes, danced to the music, and interacted with other attendees as part of the celebration. People condemned Budden for being both culturally unaware and also perpetuating slut-shaming stereotypes.

Of course, in response to Budden’s insensitive comments, Twitter had a lot to say. Most dragged him for being culturally clueless. Others had more thoughtful assessments of Budden’s words. Check them out. 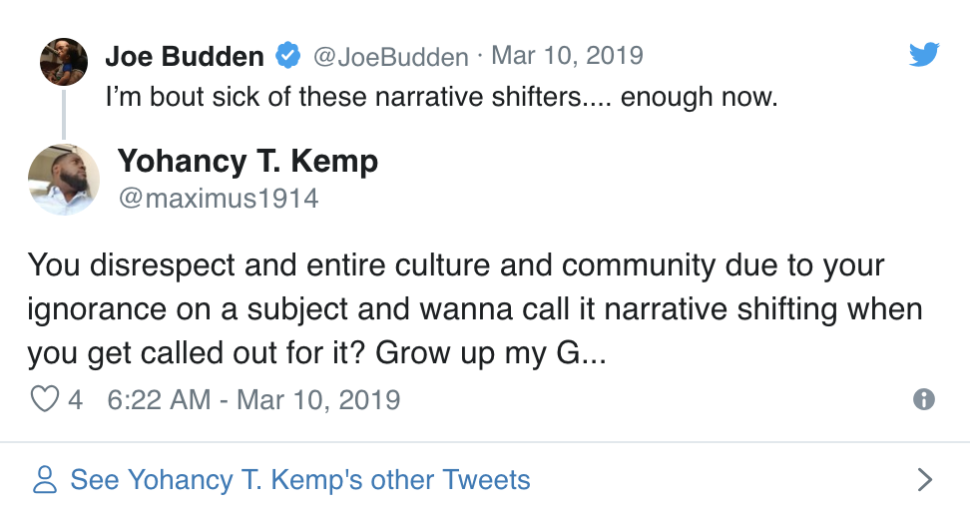 “On my most recent podcast we were having a conversation about ‘other’ ppl appropriating Culture they weren’t apart of (as we normally do). We were not discussing Carnival, Caribbean Culture or anything of the sort and never would as I’m well aware of the strong and proud history & heritage. To anyone who heard that conversation and felt offended I’d like to humbly apologize, that’s just never my intention. To those of you outraged by this 7 second clip of audio being matched w pictures of beautiful women to push a narrative we aren’t adding to let me say, I didn’t publish that, those are not my thoughts or sentiments and I don’t feel that way. I can assure you your anger is misplaced. That isn’t journalism, it’s cheap clickbait to weaponize emotions to push an agenda. It’s irresponsible and in extremely poor taste but bullsh-t spreads fast so this needed to be said (I LOVE me some US)…Again I apologize to anyone I may have offended, Salute to most of y’all that know what time it is w me fr & the rest of y’all can feel however you may, it’s your right. Peace & love.”