A Journey to Peace

Islam is exoticized in our consciousness.  Images of harems, of faceless women in black capes and of oppressive men cramp our understanding of the fastest growing religion in the world. This mystique, coupled with 24-7 coverage of terrorist attacks, makes it easy, if not unimaginable otherwise, to conflate Islam with radicalism.

I ask that you peel these moulding biases.  Open your mind to a world of unfathomable spirituality, humility and complete submission to a higher virtue.  There is a certain beauty to Islam that can only be gleaned by standing in front some of its holiest monuments and meeting its most devout followers, a beauty that willfully surrenders to its Creator.

Over the course of the next few editions, I invite you to some of the Muslim world’s most captivating landscapes, cities and homes. From the bustling streets of Kuala Lumpur, through the ancient hills of Southern Spain, into the souqs of Morocco and glassy malls of Dubai – the story of Islam is a story of a rich humanity threaded by a strand of peace. Welcome to my world! Afraid that my (nonexistent) Spanish fluency would cripple my experience, I walked around the streets of Granada keeping to myself for the first portion (read: hour) of my trip. It wasn’t long before I found myself in the middle of a band of Roma fortune-tellers, garlic in hand, as I was hiking through the hills on the outskirts of the Sacromonte area. The next week proved to be an ambush of love, faith and serenity. Much like my first encounter.

The streets of El Albaicin, the historic district within Grenada, are winding – leading you through its medieval past – yet simple enough to configure in a day. The buildings are historic, yet contemporary in their conversion from Islam to Christianity. I barely understood the people, yet felt overwhelmed by their hospitality. It was nothing short of a fantasy.

I recommend spending the first day getting accustomed to the landscape. Then spending day two in the heart of this wonderland, touring the Alhambra, an 11th century castle renovated by King Mohammed ben Al-Ahmar. I don’t think I can give it justice here, so I’ll let it speak for itself. Here is a poem that is in scripted in the building:

This piece of art has come to decorate the Alhambra;

which is the home of the peaceful and of the warriors;

Calahorra that contains a palace.

¡Say that it is at the same time a fortress and a mansion for joy!

It is a palace in which magnificence is shared

among its ceiling, its floor and its four walls;

on the stuccowork and on the glazed tiles there are wonders,

but the carved wooden ceilings are even more extraordinary;

construction in the place where the highest mansion already stood;

the decorative branches and inlays.

that is where all the perfections have met.

It is from the glorious tribe of Jazray, whose works in favour of the religion

are like dawn, when its light appears in the horizon. The landmarks are anything but historic. From Plaza San Nicolás, where you’ll find tourists marveling at the gardens of the Alhambra, you’ll also catch a glimpse of a functioning mosque. Atop a hill with a direct view of Alhambra, stands the Mezquita de Granada or Granada Mosque. This is the first mosque built in Spain by European Muslims, linking \history with its decedents. A majority of the mosque is compromised of European converts and a few American converts. The community was so welcoming and adopted me as their little American protégé. I went to Jummah prayer, ate delicious couscous with the mosque members and then grabbed some tea and desserts at a nearby café with community members. Our difference in ethnicity, language and nation knelt to the blessing of Jummah, or holy Friday prayers.

I spent the rest of my Friday in prayer. I wrote out prayers, wrote about my experience and the eclectic mix of people I met along the way. 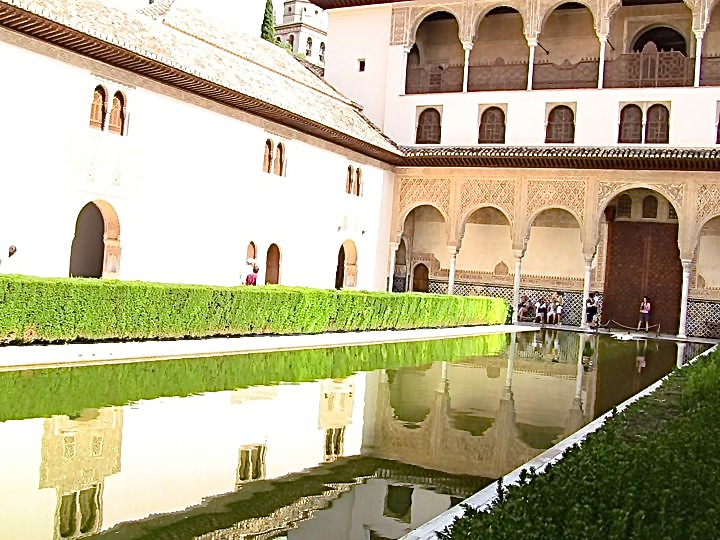 There was an irony behind my spiritual awakening. Cathedrals where mosques once settled. Latin where Arabic was once etched. Church services where Ramadan feasts were once hosted. This was the site of a Catholic appropriation that expunged my beloved religion from its adopted home. But behind this historical veil lies a beautiful body: bazaars (Plaza Nueva), romantic walkways (La Madraza), and unforgettable architecture (everything).

I spent the next three days roaming the streets, eating and mingling. With no particular plans or goals in mind. The French breakfasts, shawarma dinners and Moroccan deserts captivated my senses and plunged me into a world of 11th century Islam, an Islam that blossomed in part due to the diversity of Spain’s residents—a diversity that continues to gleam into the present. Indeed, I spent a good portion of my second day talking to Senegalese merchants about hip-hop production after spending a whole night watching flamenco performances.

I left the city disheartened. This neighborhood had such an impact on my life, and I was leaving as if I had never stepped foot.

This story was curated by Aya Saed.